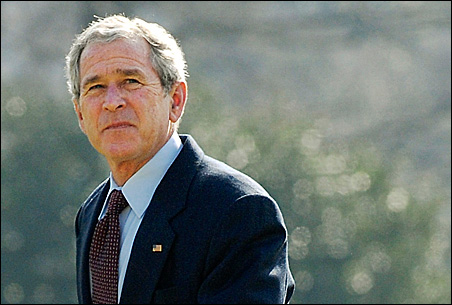 REUTERS/Jonathan Ernst
President Bush isn’t exactly a happy camper either after returning from a weekend visit at Camp David.

There’s no mystery to why the word “change” is ubiquitous in the presidential campaign. Three-quarters of voters tell pollsters that the country is on the wrong track, the highest rate of voter pessimism yet measured. Americans of all political shades debate not whether George W. Bush has been a bad president but whether he has been the worst in history. The nation is in a foul mood.

But why? From the higher, wider and deeper perspective, what’s so terrible about American life? What would lead so many people to such gloomy conclusions about the condition and future of their society?

Three essays offer responses to that question from, in order, the political left, right and center.

Matthew Taylor, writing in the January issue of the London-based New Statesman, says that pessimism has become an impediment to progressive politics. He blames excessive individualism, coupled with the unsettling feeling that individuals are helpless to improve society. The commercial media are among the main culprits, he says. News coverage exaggerates fear and a sense of impotence, apparently because both fear and hopelessness sell.

Victor Davis Hanson hones in on the Iraq war. A scholar at the conservative Hoover Institution at Stanford University, he writes in the winter 2007 issue of the Claremont Review of Books, that Iraq is not an exceptional military misadventure but part of the inevitable messiness of warfare. Today’s hand-wringing can be explained by our excessively high expectations, he says, and our low threshold for failure.

Michael Lind, in an essay titled “America still works,” argues that interest groups and the media have distorted problems over racial division, religious fundamentalism, crime, Social Security and other matters. Writing in the February issue of the British magazine Prospect, Lind says that America must dismiss its mythical problems to face its two real challenges: spiraling costs for health care and a decline in social mobility.

Myths prevent problem-solving
Lind writes: “There are three ubiquitous myths about America that make the country seem weaker and more chaotic than it really is. The first myth, which is mainly a conservative one, is that racial and ethnic rivalries are tearing America apart. The second myth, which is mainly a liberal one, is that America will soon be overwhelmed by religious fundamentalists. The third myth, an economic one beloved of centrists, is that the retirement of the baby boomers will bankrupt the country because of runaway Social Security entitlement costs.”

But, says Lind, almost everything alleged about the “balkanization” of America by race and ethnicity is misleading, largely because over time the melting pot is merging groups through assimilation and intermarriage. There will be no non-white majority by 2050, he says, largely because the second and third generation of Hispanic immigrants will adopt both the English language and many aspects of majority culture, much as the immigrants did before them.

As for ultra-conservative religious attitudes, they are confined largely to whites in the former Confederacy, he says, and pose no realistic threat to the nation’s secular democracy. “God talk” by politicians is not new to America, but he insists that nevertheless secularism is on the rise.

Social Security, meanwhile, is a “crisis” that can be easily fixed with relatively minor adjustments, he writes. But rising costs and rising inequities in health care are real and worrisome. So is the nation’s persistent and growing class disparity. “Class lines in the U.S. are hardening,” Lind writes. “There is now less social mobility in the U.S. than in Europe. The U.S. is not in danger of becoming a theocracy, but it is in danger of becoming a plutocracy.”

Expecting perfection
Hanson begins his examination of the Iraq war by quoting various politicians and generals who have declared it “the single worst strategic mistake in American history” (Al Gore) to “a major tragedy for the world” (Jimmy Carter). He goes on to list a bunch of blunders: Why were looters allowed to ransack Baghdad’s infrastructure? Why was the Iraqi military disbanded, setting thousands of unemployed youths on the streets? Why were there too few occupying troops in the war’s aftermath? Why did troops lack body armor and armored vehicles? Why were the country’s borders left open to infiltrators? Why did we invade Iraq in the first place, given the true source of the terrorist threat?

These may be sound questions, Hanson says, but they are unremarkable compared with other wartime military and intelligence blunders in U.S. history. He lists the attack on Pearl Harbor, the communist invasion of South Korea and the Gulf of Tonkin Resolution, among others. He explores tactical errors in the Civil War and World War II, including the military’s failure to detect the German counteroffensive in the Battle of the Bulge or the size and nature of the Japanese deployment on Okinawa. Each of these mistakes led to bloodshed far greater than in Iraq, yet the nation did not question them

“Has war changed, or have we?” Hanson asks. His answer is that Americans now expect perfection and are quick to assign blame. “An affluent leisured society has adopted a therapeutic and managerial rather than tragic view of human experience — as if war should be controllable through proper counseling or a sound business plan,” he writes. “We expect contemporary war to be waged in accordance with warranties, law suits and product recalls, and adjudicated by judges and lawyers in stale courtrooms rather than won or lost by often emotional youth in filth, confusion and barbarity of the battlefield.”

Gloomy attitudes about others, not ourselves
Taylor, in analyzing the current pessimism, notes that people are not generally negative about their own lives, but they are gloomy about the wider world. We are hard-wired to rationalize our own life choices for the best, he says. But there’s a perception gap about society in general. We tend to like people we know of a different race, Taylor says. But we presume that they are exceptional among their group. We believe our own family to be successful, but that family life as a whole is going to the dogs.

“The media seem to be the most obvious cause,” Taylor writes. “Bad news makes more compelling headlines than good. Tabloids and locals feed off crime stories, middlebrow papers are dismayed at the chaos of the modern world and the alleged venality and ignorance of those in power, and left-leaning broadsheets enjoy telling us that global instability is endemic and environmental apocalypse inevitable. Meanwhile, the content of television programmes — from dramas to news bulletins — contributes to what the communication theorist George Gerbner called ‘mean world syndrome.’ “

Taylor further blames the rise of individualism citing Robert Putnam’s (“Bowling Alone”) unpopular observation that people tend to distrust multiculturalism and cling to those who are like themselves. He also laments the decline of confidence that social ills can be solved, noting that the basic social pathologies (greed, crime, poverty, etc.) haven’t changed much in a century, but that today we see them “as the inevitable consequences of an idea of progress that itself feels imposed upon us.”

Taylor concludes: “Progressives want the world to be a better place. We bemoan its current inequities and oppression — yet if we fail to celebrate the progress that human beings have made, and if we sound as though the future is a fearful place, we belie our own philosophy. Instead, we need to address a deficit in social optimism that threatens the credibility of our core narrative.”

Why are Americans so gloomy about our society and its future?