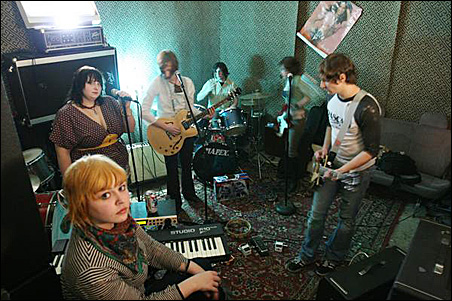 Not much can resist the force of evolution. Politicians and popes have grudgingly conceded that it exists. Even rock ‘n’ roll bands submit to its force, as members of First Communion Afterparty freely admit.

As this Minneapolis-based band nears three years in existence, local perceptions of it have changed. An adult buzz surrounds the group, whose members were once both embraced and dismissed as precocious high-schoolers. Band members, whose ages now range from 21 to 28 (except for 17-year-old Sarah Rose Wasilowski), spend less time talking about fleeing the Twin Cities for a commune in Portland, Ore., and more time talking about recording contracts, tours, and ways to stretch and explore their psychedelic tribal beats and drones.

And they have props to support their evolution: Last year, the band was No. 3 in City Pages’ “Picked to Click” compilation, and ranked high on similar lists in the Pioneer Press and Star Tribune.

Still, the dream of a communal life surrounded by friends and art hasn’t died in First Communion, but it is evolving.

“Wouldn’t it be great to have all your friends around you and be able to live on land and create music all day? Yeah, it would be great,” singer and guitarist Liam Watkins says. “Realistically, it’s probably not going to happen. But it’s a good dream to have. It’s a nice thing to think about.”

Drummer Kieran Holcomb agrees. “We have a lot of friends out there in [the Portland] scene. But in the end, we just want to make it on our own. We just want to tour and put out some great records.”

Blooming at Flowers Studio
To that end, the group this month enters renowned Flowers Studio in Uptown to record its first studio album. (Flowers has been the site of recordings by The Replacements, Jayhawks, Golden Smog, Mason Jennings, Dave Pirner — even Clay Aiken.) You can listen to First Communion AfterParty here.

In March, the group returns to Austin, Texas, for the 21st annual South by Southwest music conference and schmooze fest. This time they’ll concentrate more on making contacts at record labels and a bit less on the countless parties, says lead singer and percussionist Carin Burno.

“It’ll be a little bit more business,” she says of the music industry festival. “We kind of want to take it to another level.”

“It’s more straightforward, it’s more together and kind of trying to delve into a whole new area with tribal beats and really spaced out echo guitars and stuff like that. It’s less E, A, G open chords and more spaced out stuff.”

Please don’t call them neo-hippies
Holcomb says his own interest in 1960s psychedelic sounds stems, in part, from his parents’ love of that era’s music. “They were hippies,” he says with a laugh.

His parents listened to the Beatles, Jefferson Airplane and Bob Dylan, but more important to his development as an artist, he says, was their support of his creative urges and their own lives in the arts.

Both parents work at the Guthrie Theater; his mother is a dramaturge and his father works in the business office.

“In our house, there was always a lot of musicians coming through, and sessions at the house,” Liam Watkins says. “I was just raised on the Beatles and stuff like that.”

His father, a former fiddler in Silly Wizard and now an author, bought young Liam a “thrift shop Spanish guitar” and taught him how to play “Mr. Tambourine Man.”

“He just gave me a guitar, showed me three chords and said, ‘If you’re passionate about it, you’ll keep playing.’ And I was, so I just kept on making songs and just sort of taught myself how to play guitar.”

The story of creative parents runs through the band: Bruno’s mother was in a “feminist women’s singing group” and bassist Sarah Rose Wasilowski’s father is a sound man at the Orpheum Theatre.

Band members agree their parents’ influence plays an enormous part in who they’ve become as artists — and who they are becoming. But just as they dismiss the neo-hippie label, they also take care to make it understood that their musical and life experiments are their own and not re-creations of their parents’ past lives.

Says Liam Watkins, “Some people join gangs to make up for the fact that they didn’t have families. For us, we love our families. We have good relationships with our families. But [the band] is something more. We can understand each other a little bit better than say our parents might understand us, or our grandmas.”

Michael Metzger is a former editor of Goldmine, CD Review and Stereophile Guide to Home Theater. He is a former arts editor of Downtown Journal and Southwest Journal. He can be reached at mmetzger [at] minnpost [dot] com.

You can hear First Communion Afterparty perform at 5 p.m. Sunday, Feb. 2, on The Current (89.3 FM) on “The Local Show” with host Chris Roberts. You also can hear them on their MySpace page here.

You say you want an evolution?