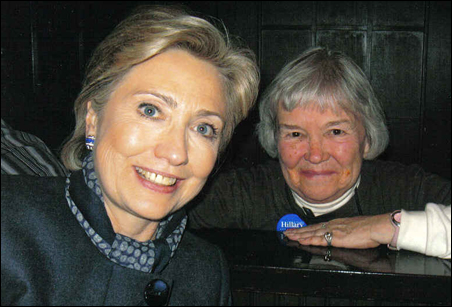 Oh what a night. The phone started ringing at the Minnetonka home of Jackie Stevenson about 10 p.m. Tuesday.

“The troops are checking in!,” Stevenson said, her voice filled with an excitement that had all but disappeared in the last month.

The troops. Hillary Clinton’s Minnesota troops. Alive, and if not totally well, filled with new excitement.

The flurry of phone calls was prompted by the networks’ declaration that Sen. Hillary Rodham Clinton had won the Democratic Party primary in Ohio.

Suddenly, all that had happened before — the 12 straight Clinton losses to Barack Obama, and the lopsided Clinton loss to Obama in the Minnesota caucuses  — seemed long ago.

A win in Rhode Island. A huge win in Ohio. Then, Texas.

“For everyone who has stumbled but got back up, this one’s for you,” Clinton had said after she was declared the winner in Ohio.

Dispirited superdelegate Stevenson bounces back
Stevenson certainly could appreciate that. She’d been way down.

“Our caucus was the lowest point,” said Stevenson, a member of the Democratic National Committee (DNC) and one of the three Minnesota superdelegates who had stuck with Clinton through loss after loss after loss. “I was the (caucus) site director in Senate District 53B (Minnetonka area). We had 2,313 people vote in the presidential preference vote. I was certain we were going to do OK. We’d been out working. We’d been making calls. The things we were hearing were good. And then, it was 2 to 1 for him.”

Nothing that has happened since Feb. 5 had given Stevenson much hope. To make matters worse, as a superdelegate, she was being pushed hard by Obama supporters to drop Clinton and come out for Obama.

But the harder Obama supporters pushed her, the feistier she got. If there was going to be just one Hillary Clinton vote at the Democratic National Convention, it was going to be Jackie Stevenson’s.

She is 73 years old. She’s dealing with back problems. But nothing was going to stop her from fighting to see her dream come true: A woman as president. Now the fight has been joined.

“I saw one poll showing that women got behind her in Ohio,” Stevenson said. “Maybe they finally got the message.”

There were hints in Dayton’s call that the Clinton campaign will demand close scrutiny over what happened in the second part of Texas’ strange selection process, the post-primary caucus.

Dayton, who had sat next to Clinton during his term in the Senate, had taken a flight to Dallas late Monday night to do whatever he could to help his friend. In the morning, he’d held a sign on an overpass during a rush hour turned frenetic because of icy roads.

“Black ice,” said Dayton. “It was so bad on the roads it looked like Carol Molnau was in charge.”

Later in the day, Dayton had made get-out-the-vote phone calls for Clinton. Then, he’d been a poll watcher. And finally, he’d been an observer at one of those post-primary caucuses that are to produce one third of Texas’ convention delegates.

He didn’t know whether to laugh or cry at what he saw.

“Total chaos,” he said of the caucus he watched. “Nobody knew what was going on. In the caucus I was watching, it was about 50 percent Hispanic, 40 percent African-American and 10 percent white. At one point, they decided that about 100 of the people in the room were in the wrong place, so they just went home. It was a mess.”

A bigger mess than Minnesota’s caucuses had been?

Texas caucus mess far worse than Minnesota’s
“On a 10-point scale, Minnesota was a 9, Iowa was a 5 and Texas was a minus 5,” said Dayton. “It was the most incompetently run thing you could imagine.”

Given what other Clinton supporters have been suggesting about the caucus portion of the Texas two-step, the Clinton campaign could be on the verge of starting a backroom brawl over how Texas delegates get divvied up even as the contestants move on in the drama without end.

But, of course, the big news was that Clinton had won the primary in Texas and, earlier in the evening, in Ohio.

Rick Stafford,  like Stevenson, a member of the DNC, a superdelegate and a leader of Clinton’s Minnesota campaign, was pleased, though not gushing, over what happened Tuesday night.

“It’s like the championship football game,” said Stafford. “We just played the third quarter and Obama got a field goal and she got three touchdowns, and we’re going to the fourth quarter. I’m delighted that she proved the pundits wrong. I’m delighted that she showed all those people who were telling her that she should wrap it up and get out of the campaign how wrong they were.”

But above all things, Stafford, a former DFL party chairman, is a man who understands political numbers.

“She still has big problems with delegate math,” said Stafford.

Stafford’s big concern is for the party. If the voters in the remaining primaries and caucuses can’t get this sorted out by convention time, or if Obama and Clinton start attacking each other too hard, he fears the party could be the loser in November.

Stafford hoping for ‘do-overs’ in Michigan, Florida
Stafford said he has been making calls to others in the DNC, including some who he hopes have access to party chairman Howard Dean, about arranging do-over primaries in Michigan and Florida. The Democratic parties of those two states, of course, jumped their primaries up in the calendar, against orders from the national party. As punishment, the national party declared those states could not be seated at the national convention.

Clinton won in both Michigan and Florida, though no candidates campaigned before those events.

“She (Clinton) thinks those delegations should be seated,” said Stafford. “But I don’t think you can just do that. On the other hand, I don’t see how you can just have a convention without Michigan and Florida. I think the only option is setting up do-overs, maybe after the Pennsylvania primary.”

Pleased as he was about Clinton’s wins, he knows her successes only make things more complicated.

“We’re standing on a delicate line,” Stafford continued. “We are involved in one of those incredible campaigns that’s about generational change and about class. What we have to be careful of is not turning away the new people who have become involved.”

So Stafford was a man of many feelings Tuesday night. Concerned. Pleased. And a little surprised.

In a conversation on the day before the primary, Stafford had found himself talking wistfully about what had gone wrong with the Clinton campaign. After all, she once had been the commanding leader.

“Keeping Bill Clinton out of South Carolina would have been a big help,” Stafford had said. “I also think it was a big mistake to simply dismiss all the smaller caucuses states. It’s all a little disappointing. There was this wonderful chance for a woman to truly break the glass ceiling. But I know if  Obama wins, that’s a huge barrier broken, too.”

“Will gays ever break the barrier?” I’d ask Stafford, who is gay. “Will we ever have a gay president.”

“We’ve probably already had one,” he replied, laughing.

“I just thought she’d be a great president,” he had said Monday, as if that was no longer possible.

Oh what a night. Clinton’s back, and her troops are checking in.

Obama’s support: beyond young and black

Jane Freeman, an octogenarian former first lady of Minnesota, and Ralph Remington, an African American serving a first term on the Minneapolis City Council, couldn’t look more different in person and on paper. But they’re both backing Obama, which says something about his broad appeal, which is still worth examining even after last night’s primary results.

Pundit watch: They said everything, they said nothing