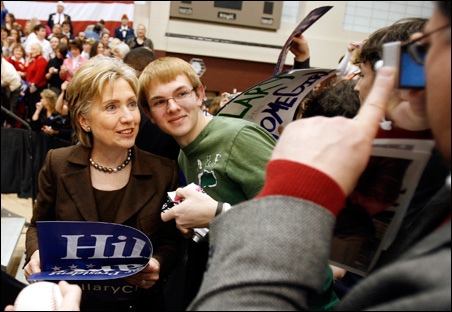 All things considered, it’s a good time to be a Republican.

At first glance, the odds of electing a Republican president next fall might seem extremely slim, given the externalities. The economy, for example, is tanking. More people are losing their homes and jobs. Prices are rising, arguably as a result of the current administration’s lack of an energy policy. An unpopular war continues to claim lives in Iraq. An unpopular president — George Bush’s latest approval ratings are at a dismal 19 percent — occupies the White House. And no enthusiastic groundswell has developed for John McCain, the GOP’s all-but-certain nominee.

So why all the smiles on the Republican side?

The answer is that Democrats have been behaving like Democrats. It’s a sort of corollary to Murphy’s Law that’s applicable every four years: If Democrats can find a way to squander their advantages, they will do so.

Evidence? The latest comes from a poll in Pennsylvania ahead of that state’s April 22 primary. It shows that McCain would beat either Barack Obama or Hillary Clinton in what’s considered a reliably Democratic state. The questions were asked by Strategic Visions LLC, which does work for Republican clients. Still, its results offer a window into the Democrats’ problem: Clinton leads Obama by a whopping 18 points, 56-38 percent; but both Democrats trail McCain. He leads Clinton 48 to 44 percent (with 10 percent undecided). And he leads Obama 47 to 44 percent (with 9 percent undecided).

No shortage of possible reasons
Why? Perhaps familiarity breeds contempt. Maybe the more people get to know the Democratic candidates the less they like them, especially when they seem to be at each others’ throats all the time. Overexposure and constant bickering have their costs. That’s one explanation.

Another is that maybe Pennsylvanians don’t know McCain as well, and that eventually he’ll wear even worse.

Still, there’s an unsettling trend line that seems to be developing for the Democratic candidates. The greatest advantage they had coming into this contest, aside from the externalities, was race and gender; Obama and Clinton appeared to transcend both.

Unlike black candidates of the past, Obama’s appeal seemed universal. Indeed, the only racial questions raised were doubts in some quarters about the “authenticity” of his African-American heritage: There was no slavery in Obama’s background, his mother being white and his father Kenyan. Clinton’s characteristic toughness, meanwhile, cast aside the usual doubts about feminine “weakness.” For a while, this historic combination seemed too good to be true for Democrats: A candidate who happened to be a woman was running against a candidate who happened to be black. What could be more American?

A traditional split
But it hasn’t worked out quite that way. As the primaries proceeded, blacks lined up behind Obama while others (most notably Hispanics and white women) lined up behind Clinton. As the New York Times pointed out his week, Clinton got only 8 percent of the black vote in Tuesday’s Mississippi primary, and Obama got only 26 percent of the white vote. That has become a familiar pattern. There are other important divisions, as well. More education and higher income favor Obama, for example. But neither Democrat has been able to withstand the temptation of slipping into the racial mode and, at times, playing the racial card.

Obama was first. Clinton’s comment about the importance of Lyndon Johnson’s presidential role in passing the civil-rights agenda was in no way meant to diminish the Rev. Martin Luther King Jr. But that’s the way Obama’s campaign played it.

Now comes the remark from Clinton fundraiser Geraldine Ferraro to the effect that Obama wouldn’t be in such an advantageous position if he were white — or a woman of any color. The truth of her comment is debatable, but saying such a thing in the first place was sure to offend the Obama camp and lead to the accusation, made by the Rev. Al Sharpton, that Clinton is playing a cagey game of race politics. Ferarro, by the way, resigned “with the grace of a Molotov cocktail.”

Sharpton also criticized Pennsylvania Gov. Ed Rendell, a Clinton supporter, for saying last month that some white voters “are probably not ready to vote for an African-American candidate.” That’s undeniably true, but Sharpton wanted to insinuate that Rendell had a bad motive in saying so.

Both candidates on Thursday tried to step clear of the mess. Clinton apologized to black voters. “I rejected what [Ferarro] said and I certainly do repudiate it,” she told a gathering of African-American newspaper publishers. Her campaign emphasized that she is not giving up on trying to attract black voters, once a key element of her campaign strength.

For his part, Obama called Ferarro’s comment “ridiculous,” but said he didn’t believe she intended it to be racist. The great majority of voters will base their decisions on substantive issues, he said, and he pointed to his victories across the country as proof that he can draw support from all races and regions.

Larry Sabato, a political scientist at the University of Virginia, told Voice of America: “I suppose you could argue that any time race is raised it hurts Obama more, simply because in America the electorate is about 11 to 12 percent African-American and for Obama to win a general election he has to win a very substantial minority of the white vote, and he has to win the majority of the Hispanic vote.”

It is one of the great political ironies that the Democratic Party, which enjoys the support of both whites and racial and ethnic minorities, runs the greatest risk of damage from racial politics, while the Republican Party, made up almost entirely of white voters, gets to smile from the sidelines. At least for now.