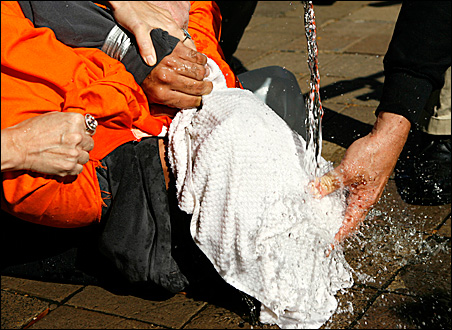 REUTERS/Kevin Lamarque
Demonstrator Maboud Ebrahimzadeh is held down during a simulation of waterboarding outside the Justice Department in Washington, D.C., last year.

The banner issue in the bill President Bush vetoed over the weekend — limiting CIA interrogation tactics — is poised to surface repeatedly this election year.

Minnesota’s Republican Sen. Norm Coleman is already facing questions why he voted against the bill while also saying he opposes harsh interrogation tactics such as waterboarding. Other incumbents will have to answer for their votes one way or another as well.

Meanwhile, the issue is set to take center stage in the cases of foreign men the United States has held for years at Guantanamo Bay, Cuba.

The U.S. Supreme Court is expected to deliver an opinion before July on cases testing whether Guantanamo detainees have a right to challenge their detention in U. S. federal courts. In advance of a Supreme Court decision, the Defense Department is moving on its own to prosecute murder and war-crimes charges against six Guantanamo detainees for alleged involvement in the Sept. 11, 2001, attacks on the United States.

CIA officials have acknowledged that evidence against some of the detainees was obtained through waterboarding and other tactics that the vetoed bill would have banned. Experts at the National Defense Intelligence College (PDF) and elsewhere say such evidence can’t be trusted.

The upshot is that court cases will keep the issue in the headlines while the debate roils in election-year politics.

Limits on interrogation
The intelligence authorization bill Bush vetoed doesn’t speak to the specifics of the Guantanamo cases. More broadly, it would limit interrogators to tactics allowed in the U.S. Army Field Manual, which prohibits waterboarding, mock executions, forced nakedness and sexual acts.

Members of the military were held to the same limits in the Detainee Treatment Act of 2005. But the CIA had been operating under special permission the Bush administration granted in 2002 to use enhanced interrogation techniques.  CIA officials say the techniques were used in 2002 and 2003 on three alleged al-Qaeda members but have not been used since 2006. 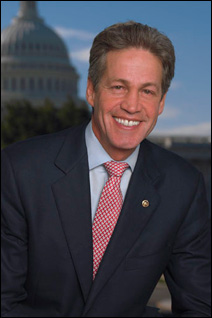 In his radio address announcing the veto Saturday, Bush said the bill would “take away one of the most valuable tools in the war on terror.”

The CIA’s program to detain and question alleged terrorist leaders, he said, “has produced critical intelligence that has helped us prevent a number of attacks.”

Procedures in the Army Field Manual, he said, were designed for soldiers questioning lawful combatants captured on the battlefield.

“They were not intended for intelligence professionals trained to question hardened terrorists,” he said. (To hear the address, go here.)

Coleman voted for the 2005 Detainee Treatment Act. Further, he has said several times that waterboarding is torture and should not be used as an interrogation tactic.

But Coleman voted against the current intelligence bill because he agrees with Bush that the Army Field Manual is not an appropriate handbook for the CIA, he said in a letter to the Star Tribune.

“The Army Field Manual was written for military agents facing military scenarios,” Coleman wrote. “Simply put, the CIA is not the Army and it operates under very different circumstances.  Requiring the CIA to adhere to the requirements of the Army carries with it a host of implications that go far beyond the issue of waterboarding.”

Veto denounced
Human rights groups in Minnesota disagree. The Minneapolis-based Center for Victims of Torture pressured Coleman to join three moderate Senate Republicans who voted against the White House on the intelligence bill.

“The president has not adequately explained why, when it comes to humane treatment, we need two sets of rules: one for the CIA and another for everyone else,” Johnson said in a statement. “Is the act of torture and cruelty immoral only when perpetrated by men and women in uniform… The president’s reasoning may be hazy but our core values remain crystal clear.”

Speaking from experience at the center, which has treated torture survivors from 67 countries, Johnson said harsh tactics yield worthless information because “persons being tortured will tell their torturer anything to end their suffering.” He vowed to continue fighting to establish “one national standard that proudly reflects the universal truths for which America stands.”

Bloggers from the left end of the political spectrum kicked the tone up several notches, signaling they intend to make an issue of Coleman’s track record on harsh interrogation.  Coleman’s vote in 2005 for the Detainee Treatment Act doesn’t tell the full story, said the Big E blog.

“As Chair of the Senate’s Permanent Subcommittee on Investigations Norm could have called hearings, exposed and probably stopped the abuses at Bagram Airbase in Afghanistan, Abu Ghraib, Guantanamo Bay and the extraordinary renditions. The fact is Norm did nothing,” the blog said.

Coleman has plenty of support for his vote. Minnesota’s delegation split along party lines, with all of the Republicans opposing the bill.

It’s unlikely the Democratic-controlled Congress will overturn the president’s veto. It takes a two-thirds majority to override, and the House vote on the bill was 222-199 and 51-45 in the Senate.

The presumed GOP nominee for president, Sen. John McCain of Arizona, also sided with the Bush administration on the bill. McCain, who was tortured himself in North Vietnam, has adamantly opposed torture, and he co-sponsored the Detainee Treatment Act. McCain said that the current bill would go too far by applying military standards to intelligence agencies. He also said waterboarding already is illegal.

Coleman’s office did not respond to a request for comment early Monday, but Coleman told CQ Today that he was taking his cues from McCain.

“I’m standing by my colleague and looking to him for counsel,” Coleman said.

Most members of Congress followed partisan lines in their votes on the bill which would have blocked the CIA from using harsh interrogation tactics such as waterboarding.  But a few Senate Republicans joined Democrats in voting for the bill; a few House Democrats went the other way. Because the votes were close — 222-199 in the House and 51-45 in the Senate — President Bush’s veto is likely to stand.

Here is how Minnesota’s delegation voted

Despite veto, debate on torture won’t go away