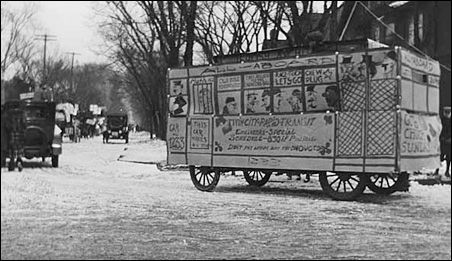 Minnesota Historical Society/Photographer: Henry M. Wilson
A float in the 1920 St. Patrick’s Day Parade on the University of Minnesota campus.

A quick reminder that while the clocks jumped forward last weekend, the St. Patrick’s Day Parade in downtown St. Paul is jumping backward — two days — to noon this Saturday.

But this change in local parade dates only affects St. Paul.

In Minneapolis, the downtown parade goes on as usual: 6 p.m. Monday, March 17, the long-standing feast day of St. Patrick. (Obviously, that’s because there’s not an imposing Catholic Cathedral looking down on the parade route in Minneapolis, as there is in St. Paul.)

The St. Paul change is occurring because of this year’s early Easter (March 23) and the Catholic Church’s preference to keep the usual kind of revelry that occurs amongst the Irish on their saint’s day from taking place during Holy Week, which begins Sunday.

(The date for Easter varies; it’s determined by the full moon and the vernal equinox and rarely comes this early. It’ll be 2160, long after we’re all dead and gone, before the parade has to be moved again because of Holy Week.)

“We had some lengthy discussion about making the change, and it wasn’t only about the directive from the bishop,” said Brian Keenan, president of the St. Patrick’s Association. “But most of our parade-goers are Catholic, and this makes it easier for them, and for non-Catholics, to get to the parade because Saturdays are always our biggest parade days.”

The separate parade days are good news for local Irish bars, such as the Liffey and O’Gara’s. After all, two post-parade rushes are very lucky, indeed, for tavern owners.

In St. Paul this year, the parade has become sort of a Sons’ Affair.

Sons shine for this year’s celebrations
The 2008 Mr. Pat is Tom Barrett, the executive director of the Minnesota Gambling Control Board. His father, Frank Barrett, was part of the group that organized the first modern-day St. Paul parade in 1967.

The planning and organization of that first parade occurred at Gallivan’s Bar on Wabasha Street, the longtime destination for many courthouse officials and other downtown workers. (It’s now Matty B’s, owned by a group that includes Matt Birk of the Vikings.)

Meanwhile, named as Honorary Irishmen for this year’s parade are John and Pat Mancini, sons of legendary West Seventh Street restaurateur Nick Mancini, who died last year. The brothers, who continue to run the famed Mancini’s restaurant, reportedly will refer to themselves as O’Mancinis.