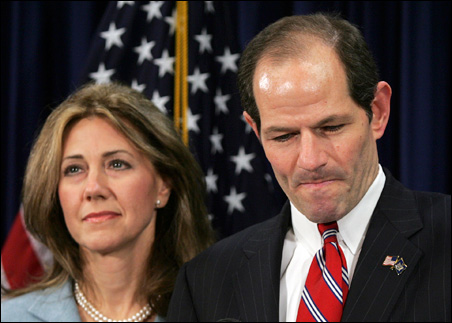 It was a bombshell so unexpected that hours after New York’s governor stood before microphones apologizing for a transgression he couldn’t bring himself to name, people still found themselves in a stunned state of cognitive dissonance.

“The idea that Gov. Eliot Spitzer — the square-jawed crusader who promised to bring ethics to Albany, the former prosecutor who chased corruption on Wall Street so ferociously that people nicknamed him Eliot Ness — was somehow involved in a prostitution scandal was too much,” wrote James Barron in the New York Times on Monday night. “New Yorkers who thought they had heard everything were, for a change, dumbfounded.”

This was, after all, the man who’d cut his teeth on racketeering before moving on to banking and insurance. Business Week laid out the highlights of his years as New York’s attorney general: “His prominence rose in 2002, when he launched an investigation of Wall Street analysts following the collapse of the dot-com boom. He alleged that high-profile analysts at investment banks, including Merrill Lynch’s Henry Blodget and Jack Grubman of Citigroup, issued biased advice to gain investment banking business for their firms.

“His actions led to more than $1 billion in fines against 10 Wall Street firms and new rules governing analysts. In 2003, Spitzer followed up by targeting the mutual fund industry and the practice of giving beneficial treatment to institutional customers. … Then came his campaign against NYSE boss (Dick) Grasso’s supersize compensation. … Spitzer then went after the insurance industry for price fixing.”

That supersized career led to his overwhelming victory in New York’s 2006 governor’s race and an image that was superclean, if hyper-ambitious.

‘From lion to laughingstock’
But what emerged Monday night, once words were found, was not so much the single image of a crusader-turned-fallen-knight in one fell swoop but a longer record of missteps over time. In a piece titled “The tragic fall of Eliot Spitzer,” Salon.com’s Walter Shapiro wrote, “The feeling of tragedy is unavoidable as the intense and wired Spitzer has gone from lion to laughingstock in just 14 short months as governor.”

Michael Powell and Mike McIntire wrote in the Times of Spitzer’s singularly hard-charging ways in the governor’s office: “Reformers chortled at the thought of this young bull with a national reputation stomping about the calcified halls of Albany. Mr. Spitzer cast himself, self-consciously, as the alpha male, with a belief in the clarifying power of confrontation. Long predawn runs, fierce basketball games: He did nothing at half-speed. ‘Listen, I’m a steamroller,’ he told a State Assembly leader in his first days as governor, adding an unprintable adjective into the mix for emphasis.

“Soon enough, his enemies and even admirers and friends came to affix another adjective to his name: reckless. So often the new governor seemed to accumulate enemies for sport, to threaten rivals with destruction when an artful compromise and a disingenuous slap on the back might do just as well. ‘I am not naturally suited to this job,’ he told a reporter recently, and perhaps he knew more than he was letting on.”

He relied, they reported, on a “shiv-in-the-kidney style, which served him so well in facing down skittish bankers and mutual fund executives” but which “met its match in Albany.  … Time and again, Mr. Spitzer began as the hunter and finished as the hunted. He would curse at legislators, who would in turn leak damaging word to reporters or hold up crucial legislation.”

‘Dodgy territory’ before
But his problems — even well before his governorship — included ethical lapses, Powell and McIntire noted. They detailed earlier times when his footsteps fell “in dodgy territory”:

“In 1994, he denied — and later acknowledged — secretly borrowing millions of dollars from his father to finance an unsuccessful run in the Democratic primary for state attorney general. Mr. Spitzer the prosecutor might have pursued this sort of behavior as possibly illegal.” And early in his term as governor it became known that he’d used state troopers to try to link GOP Sen. Joseph Bruno to misuse of a state helicopter.

Then, last, year, William Rashbaum reported in the Times, in the offices of the Internal Revenue Service, “investigators conducting a routine examination of suspicious financial transactions reported to them by banks found several unusual movements of cash involving the governor of New York, several officials said. The investigators working out of the three-story office building … typically review such reports, the officials said. But this was not typical: transactions by a governor who appeared to be trying to conceal the source, destination or purpose of the movement of thousands of dollars in cash, said the officials, who spoke on condition of anonymity.

The money ended up in the bank accounts of what appeared to be shell companies, corporations that essentially had no real business.”

The transactions, officials said, “suggested possible financial crimes — maybe bribery, political corruption, or something inappropriate involving campaign finance. Prostitution, they said, was the furthest thing from the minds of the investigators.”

Now, the public will be examining, in excruciating detail, Spitzer’s secret life as “Client 9” of a worldwide prostitution ring. Douglas Muzzio, a political science professor at Baruch College, typified reactions when he opined in the Washington Post, “This is not even a nail in the coffin — this is a spike. His moral authority is nonexistent.”

The portrait that is beginning to emerge is a picture not of heroism but of hubris.