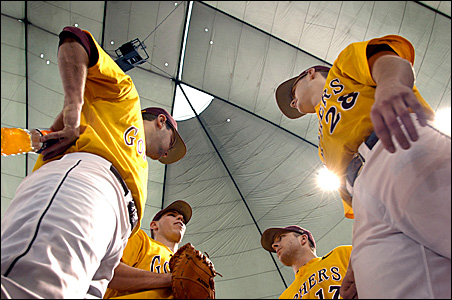 MinnPost photo by Craig Lassig
Gopher players confer Sunday during their 11-9 victory over Northern Iowa at the Metrodome.

The sound of baseballs popping into mitts, like a string of slowly exploding firecrackers, warmed University of Minnesota Coach John Anderson more than the heaviest winter coat.

The Gophers were just starting practice in the Metrodome one recent afternoon, sheltered from the 20-degree cold outside as they prepared for the Dairy Queen Classic, their traditional early-season tournament. (They ended up winning two of the three at that tournament and two of three at the Dome over the weekend for an overall team record of 4-5.)

For the Gophers and other college baseball teams in the greater Twin Cities, the Dome isn’t the gray, dank, charmless dungeon the Minnesota Twins can’t wait to abandon. It’s a godsend.

About 130 college games will be played there this month alone, even with eight days blocked out for AMA Supercross competition. Games begin before dawn and end deep, deep, deep into the night, games that would be impossible to play outside even in a more temperate March than this one.

Coach Anderson, Dome careers coincide
Anderson’s tenure as Gophers coach parallels the life of the Dome. It opened in 1982, his first year as Minnesota’s head coach. Practicing and playing in the Dome in February and March has helped Minnesota reach the Big Ten championship game the last seven years — and extend its stretch of consecutive winning seasons to 45, the fifth-longest active streak in Division I.

“Somebody asked me what I’m going to do when the Dome goes away,” Anderson said as he stood near the first-base dugout, arms folded tightly across his chest. “I said, ‘Retire.’ That’s not too far from the truth.”

And not too far off. The Dome’s uncertain future after the Twins move into their new stadium in 2010 concerns Anderson, who turns 53 in May, and other area coaches whose teams use the facility.

Bill Lester, executive director of the Metropolitan Sports Facilities Commission, said baseball will always have a home in the Dome. “As long as it’s standing,” he said, “we’ll continue to have amateur baseball.”

Vikings situation complicates Dome future
But what if the Vikings, who are bound by lease through the 2011 season, take over the site, demolish the Dome and build their proposed retractable-roof, football-only stadium?

Curiously, Lester said the commission asked the Vikings to accommodate amateur baseball in any new facility on the Dome site. However, nothing in the Vikings preliminary stadium plans indicates that. Lester Bagley, the Vikings’ point man for the stadium push, did not respond to an email query about baseball.

“The thing is, as long as the Vikings are around and stay in the facility, I think we have a chance,” said Hamline University baseball coach Jason Verdugo, whose team plays five doubleheaders in the Dome this season. “I can’t imagine them configuring it without having baseball in there. From a revenue standpoint, it would make sense.”

Teams that use the Dome pay $950 each for doubleheaders, which includes umpiring fees, according to longtime University of St. Thomas baseball coach Dennis Denning. Schools in the Minnesota Intercollegiate Athletic Conference, http://www.miac-online.org/ to which the Tommies and Hamline belong, are scheduled for 59 games in the Dome through the end of this month.

Dome busy this month ’round the clock with ballgames
Walk into the Dome almost any hour of the day or night this month and you’ll probably see a college game, or perhaps a high-school scrimmage. Recently, Hamline started a doubleheader with Central High School at 5 a.m. Two days later, they played Loras at 5 p.m. (The Pipers lost three of the games, and led a fourth that was suspended because of time constraints.) One recent day, St. Thomas players took batting practice at their campus fieldhouse at 5 a.m. before a 6:45 a.m. doubleheader with St. Scholastica, which the Tommies split.

“After five weeks in a fieldhouse, these kids would be willing to play any time,” Denning said. “The Dome is a blessing to us, even if we play at a not-great time. The coaches love it. The kids love it.” 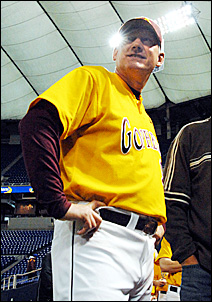 The Dome’s availability allows academic-minded MIAC schools to space out their 40-game schedules (20 in conference) and play most games on weekends, which means fewer missed classes.

Metrodome eases college baseball schedules
Without the Dome, coaches say scheduling becomes trickier. Options included adding more games in midweek, or on spring break trips to warmer climates. St. Thomas, the 2001 Division III national champion and an NCAA tournament team 12 of the last 13 seasons, is already cramming 11 games into a seven-day trip to Florida, including one exhibition against Twins minor-leaguers.

Hamline’s players and coaches struggled to raise $30,000 for this month’s nine-game swing through Arizona. More games would mean longer stays and higher costs. But even so, Verdugo said, “We don’t have the luxury to say we can miss a week of school.” Scheduling fewer nonconference games would be a last resort.

“We would just do what we had to do,” Denning said. “But we would really miss the Metrodome.”

So would Anderson. For him, the Dome’s ticking clock makes building a new baseball stadium on campus a fund-raising priority. With the U’s building moratorium over, athletic director Joel Maturi finally has given Anderson the OK to raise money for a new stadium to replace the cracking steel grandstand at Siebert Field.

A 2002 Star Tribune report that claimed Anderson had enough money pledged for a new stadium, only to run afoul of the moratorium, was inaccurate, Anderson said. Though he had a “vision” of what he wanted — and a favored site (now bulldozed by the U football stadium construction) — Anderson said he never formally raised funds because nothing had been designed, and he couldn’t tell potential donors how much money he needed.

That didn’t stop former Twin and baseball Hall of Famer Paul Molitor, a U product, from giving Anderson a check several years ago. Anderson would not say how much it was for. Molitor, a Twins special instructor in spring training, did not respond to an interview request through the Twins media relations department.

Sharing a renovated Midway Stadium with the St. Paul Saints won’t work, Anderson said, because if the Saints fold, he fears the Gophers will be trapped off-campus forever.

In a perfect world, Anderson will coach until the Gophers are safely ensconced in a new facility. A 1977 U grad, Anderson was the youngest coach in Big Ten history when he took over the program at age 26. He succeeded George Thomas, who himself succeeded the legendary Dick Siebert, for whom the U stadium is named. Anderson’s 950 victories in 27 seasons make him the U’s winningest baseball coach; he passed Siebert’s 754 total in 2002.

Over the years, Anderson said, he has been approached about other jobs, such as at Oregon, which sought a coach to revive its program, and Florida. “I felt like if I left at a certain time, they might drop the program,” he said. “I’m an alum. I care about the program. Maybe that’s crazy, but it entered into my mind.”

He hopes to have a stadium design in hand by midsummer. Maturi, in an interview with MinnPost.com’s Jay Weiner, guessed it would have a price tag of $12 million to $15 million. “Hopefully we can raise the money,” Maturi said, “because we’re not going to the state for any money, and I don’t have the money for debt service.”

Even if the complex is built to Anderson’s specifications, he would love for the Metrodome somehow to be saved for the sake of the local college programs that have come to depend on it.

“I want other people to play baseball in here, not just us,” Anderson said. “I think the people of this state should stand up and fight to keep it, because it’s a real asset.

“It’s an indoor playground, and part of our history. Why wouldn’t you keep the Dome?”

Home at the Dome: U of M, college baseball teams depend on indoor play to beat cold weather