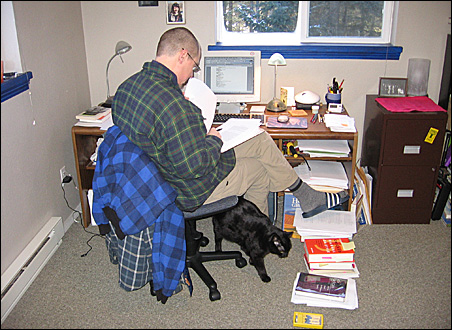 Photo by Amy Goetzman
Chris Dodge, a writer and former librarian, uses pen, paper and perhaps an occasional paw for indexing assignments in his home office.

Their work brings no acclaim, very little in the way of financial rewards and nary an invitation to head out on a book tour.

Yet without the efforts of book indexers, readers and researchers would flounder unguided through dense volumes, and poem seekers who recalled only a topic or a first line might wander as lonely as a cloud, endlessly searching for that half-remembered verse. No, it’s not this one. No, this isn’t the one either.

A well-crafted index may actually yield a bit of accidental poetry of its own. But for the most part, those orderly rows of numbers and notations are purely utilitarian, serving the academic and guiding the curious browser, and possibly even boosting the success of a book.

James Cihlar, managing editor at Minneapolis-based Milkweed Editions, says including an index is a direct investment in the salability of certain books. “If we are planning an index, we send that information to our distributors and sales accounts early on,” he says. Milkweed commissions a handful of indexes for its titles each year. “It can make a real difference to whether or not a book gets picked up by a library collection or gets used by schools.”

Pen and paper still involved
While including an index is a savvy business move in today’s publishing market, it’s also an old-fashioned craft, often practiced with pen and paper, requiring a sharp eye and an organized mind.

It is an art to which few are called.

According to the only professional association for indexers in the country, the Society for Professional Indexers, there are only five professional book indexers in Minnesota, four in Wisconsin, two in Iowa and none in the Dakotas. (Not all indexers are members.)

Software exists that is capable of creating a complete list of references and page numbers, a flat concordance listing every mention of every term in a book. Some indexers use these programs to assist in their work, but it’s no substitute for a human-created index. Such a computerized listing is so exhaustive and imprecise that it’s useless. Worse, it lacks soul.

“A talented indexer comes to a book with previous knowledge [of the subject] and a little sensitivity,” Cihlar says. “They can guide the publisher to an extent, help us know what to throw a light on, and understand how a reader will need to use a book.”

Indexers also act as proofreaders, alerting editors to inconsistencies and errors. Cihlar has commissioned freelance book indexer Chris Dodge to work on titles such as the Edward Abbey letters collection, “Postcards From Ed: Dispatches and Salvos from an American Iconoclast,” and “With Mouths Open Wide,” a book of poetry by John Caddy.

While fiction titles hardly ever have indexes, poetry volumes, particularly collected works, and “new and selected” editions, often have an index of first lines and subjects.

Dodge, a writer and former librarian for Utne Reader and the Minneapolis Public Library, also has a passion for environmental and natural history topics, an asset to a press like Milkweed, whose non-fiction titles tend to emphasize the natural world.

He has indexed 20 books for six different publishers in the past 15 months, and acknowledges he practices a rare craft.

“I think it might be artisanal, like knowing how to make knishes, or silver swords or wooden marionettes, the kind of thing that has gotten some people in Japan named ‘living treasures,’ ” he says.

It can be slow-going, painstaking work. “The time it takes to write an index depends on the book’s complexity, length and design, among other things. Trotsky’s ‘History of the Russian Revolution,’ at 900-plus pages, took me about a month, even though I was just indexing names and classes of people. Another book, at 220 pages or so, has taken less than a week,” Dodge says.

Dodge says he has received a credit in only two of the books he has indexed. “The indexer has no face — and no name, for that matter,” he observes.

And these unsung heroes do not become wealthy. Dodge works as a freelance writer as well as indexer, and Denise Carlson, a Duluth-based indexer who works on about 35 books a year, supplements her income in the summers by working as a tour guide and costumed interpreter at Split Rock Lighthouse Historic Site.

“Indexing is pretty solitary work, so the job at Split Rock gets me outside and interacting with people six months out of the year,” she says.

The inner and outer life of an indexer
The profession grows by attracting compulsively orderly book lovers who desire a career change: namely, librarians. Many, if not most, indexers have spent time in the stacks. Carlson holds a master’s degree in library science and has worked in the James J. Hill Library and at the library at the Minnesota Historical Society. (Her clients include the Minnesota Historical Society Press and the University of Minnesota Press.) She also took indexing courses, offered by  — of all places — the U.S. Department of Agriculture. She estimates that more than 50 percent of indexers have taken USDA courses.

But a class taken is not an indexer made. Much of an indexer’s skill is innate, and a love of books, cover to cover, is essential. While Carlson considers herself to be an extrovert, she finds great satisfaction in creating something “worthwhile,” not to mention expanding her trivia reserves. “I have come to enjoy children’s nonfiction a lot,” she says. “I always learn something, like the secret life of spiders or what makes a rainbow.”

Dodge says that as a reader, he usually looks at a book’s index right after looking at its cover, and sometimes inserts handwritten notations to a published index if he finds it lacking. Memorably bad indexes he has encountered include that of the “Chicago Manual of Style” and Ben Watson’s biography of Frank Zappa, “The Negative Dialectics of Poodle Play,” which he called “too inclusive.”

But a greater problem is an index that is too sparse, he says. He aspires to design precise indexes that mirror the author’s language and serve the reader. But even within the dictates of the form, an index leaves room for some creativity, moments of random joy within hours of absolutism.

“There are occasionally times when a sort of narrative can develop, or ‘poetry,’ that can be further shaped by word choice in the subheads,” he says. Case in point, from “Vietnam: The (Last) War the U.S. Lost,” by Joe Allen (forthcoming from Chicago-based Haymarket Books).

“I chose to arrange subheads alphabetically in this index, though sometimes chronological entries are more effective,” said Dodge. “That said, I intentionally used ‘withdraws’ in the last subhead above, instead of ‘resigns,’ so that it would file last, not only to give chronological closure, but also to complete the narrative with a sort of emphatic full stop.”

There are also opportunities to play jokes on the reader. While reading “Winter: An Ecological Handbook,” by James C. Halfpenny and Roy Douglas Ozanne, Dodge noted a reference to an elephant trap:

There is no mention of an elephant trap on page two. A joke that perhaps only an indexer would get.

Amy Goetzman writes about books, libraries and the literary scene. She can be reached at agoetzman [at] minnpost [dot] com.

The invisible art and craft of indexing