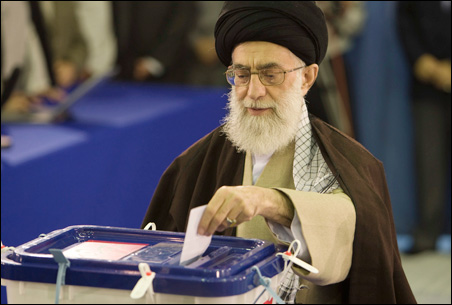 To paraphrase Dorothy Parker, Iranians’ parliamentary election choices this weekend ran the gamut from A to B. There were ultraconservatives loyal to President Mahmoud Ahmadinejad, and so-called “pragmatic conservatives” treading a slightly softer line on Western-antagonizing nuclear ambitions. Only a few voters were allowed Option C, a vestigial bloc of reformers who managed to avoid being kicked off the ballot.

The reformists scored a moral victory — going from 40 to 50 seats in the 290-member body, according to Al Jazeera, although Reuters suggests those gains might not materialize. Still, conservatives won a commanding majority, with at least 163 seats, the news service reports.

Although ruling cleric Ayatollah Ali Khamenei told the state-run Islamic Republic News Agency (IRNA) that “the Islamic Republic of Iran, by holding almost 30 democratic elections in less than 30 years, has shown that it is the most honest democratic governing system in the modern world,” the European Union declared the election “neither fair nor free.” That’s because a cleric-dominated council disqualified 2,000 candidates, mostly reformers.

Former reformist president Mohammad Khatami called the disqualifications a “catastrophe,” and reformers had considered a boycott, only to decide against it. Turnout was 60 percent, up from 54 percent in 2004.

According to IRNA, 68 percent of the voters this weekend were women. “Western hackers tried to disrupt Iran’s parliamentary elections which were for the first time conducted in a computerized way but to no avail,” Irna added.

Although IRNA reports that “principalists” — another name for conservatives — won 71 percent of the vote, they are split into two blocs: the United Front, which consists of Ahmadinejad loyalists, and the Broad Front, the pragmatic conservatives. The Associated Press, quoting state television and Irna, says pro-Ahmadinejad politicians have won about 70 seats, conservative critics of Ahmadinejad about 43, and reformists 31. Approximately 70 elections were so close they will require a second runoff round later this spring.

Many Westerners cling to the hope that voters will oust Ahmadinejad in the 2009 presidential elections — if not for a reformer like Khatami, then a less hawkish conservative. While seasoned observers liken the president’s foreign policy power to that of a hood ornament on an Iranian-made Saipa, the parliamentary returns indicate that even hopes for a new figurehead may be overblown.However, conservative Ahmadinejad critics assert they will have a parliamentary majority.

The BBC observes that “the big winner is the supreme leader, Ayatollah Ali Khamenei. He has managed to help orchestrate a parliament even more loyal to him than its predecessor. And the internal battle within the conservatives may rather suit him. He has always been a leader attached to the principle of ‘divide and rule.'”

Tehran Mayor Mohamed Qalibaf, a 2005 presidential candidate and former head of the national police, has always been among the top pragmatic conservatives mentioned if Ahmadinejad is retired. While Ahmadinejad staged a high-profile trip to Iraq last month, Qaibaf visited Baghdad, which some took as a bit of pre-election maneuvering.

However, the weekend’s elections returned another 2005 presidential also-ran to the spotlight: Ari Larijani, Iran’s former top nuclear negotiator, who triumphed in the holy city of Qom. According to the United Kingdom’s Independent, “Some Iran watchers see the vote in a clerical stronghold like Qom as a sign that the powerful clergy have lost confidence in Ahmadinejad and may rally behind Larijani.”

As nuclear negotiator until last October, Larijani reported directly to Ayatollah Khamenei, rather than Ahmadinejad, who has “no role” in security policy, according to Britain’s conservative Financial Times. The paper reported in 2006 that Larijani had upheld a suspension of uranium enrichment while “at the same time pursued a strategy of whittling away the suspension step by step.” However, French analyst Bernard Hourcade notes that 20 percent inflation threatens Ahmadinejad’s domestic support; he says of Larijani’s bloc, “They know that Iran was wasting petrol money. [And] they didn’t like the Americans, but they knew it was necessary to deal with them.”