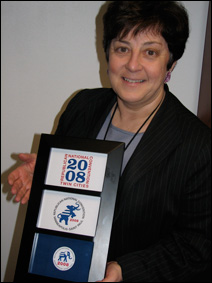 A framed front-page story from the Wall Street Journal hangs on the wall of Maria Cino’s office in downtown St. Paul. The 1995 article analyzes how a team of women leaders in the Republican Party resuscitated the ailing Republic Party and helped fashion its historic 1994 congressional victories.

Prominently featured in the story — and pictured in the Journal’s trademark line-drawing, right below the headline — is Maria Cino.

Thirteen years later, she’s still taking on important Republican Party matters, and that’s why she’s now in St. Paul: She’s the CEO of the Committee on Arrangements for the Republican National Convention, coming to the Xcel Energy Center Sept. 1-4.

She’s running the show for GOP convention
That job puts her in charge of all phases of the party’s once-every-four-years gathering which, it’s all but certain, will select John McCain as the presidential nominee.

And even if some of the drama surrounding the nomination has passed, there certainly will be pomp and festivity to spare as party leaders gather to kick off the campaign and enjoy a heck of a four-day party. Plus, we’ll meet the new vice presidential candidate, who just might be a local fellow.

Making all the arrangements is a big job, requiring a staff that has grown steadily from a handful to 57 people. That number will hit 140 or so by summer.

Hotels, buses, the stage, the program, the parties, the press, the publicity and, eventually, the cleanup all come under her bailiwick. It’s like throwing a party for 45,000 people.

Cino and her team have less than six months to complete preparations for an event she calls the “Super Bowl of Politics.” They’re reserving 16,000 hotel rooms in 101 area hotels and then have to allocate space to each of the state delegations.

They’ve got to set up the arena with a stage, as well as work areas for the delegates and media. They have to find buses to get the delegates from Minneapolis, the suburbs and far-flung hotels to downtown St. Paul for the daily events. Planning routes for all those buses to maneuver through downtown will be quite the logistical puzzle, she says.

In the end, she says, it will prove to be a positive experience for the Twin Cities, particularly because the national and international media who come to town will give their audiences a glimpse of Minnesota attractions.

Cino’s been on the job here since last March, and she moved into a downtown St. Paul apartment last June.

Planning efforts and staff have been steadily growing
“We started out slow and steady; it’s like being a Fortune 500 company, but starting from dust and, eventually, going back to dust,” she says.

One of the first things she did was hire Mel Raines, who’d been Vice President Dick Cheney’s assistant for political affairs. Cino also brought on communications director Matt Burns early in the process, to set up contacts with local and national media, as the planning progressed.

“Right away, we talked to the directors of the past three national conventions, to see what worked and what didn’t,” Cino says. “Based on that, we shrunk the hierarchy of the organization, looking for people who could make decisions on their own.

“And we learned in the past that they’d brought on communications people late in the process, but we wanted to get going earlier in getting the word out, which is why Matt was one of our first employees. It’s been 110 years since the Republican convention was here in the Twin Cities, so we want to let people know not only about the economic value to the area, but also about how the media from around the world will be highlighting these cities with stories throughout the convention.”

Local officials impressed with Cino, organizational skills
Those in St. Paul who work closely with Cino say that she brings an energetic bearing to the job,  and they’ve seen her immerse herself in the Twin Cities.

“The first time the mayor [Chris Coleman] and I met with her, she opened up a big binder, with all these tabs, and we realized she runs a very organized operation. The level of her professionalism just about knocked our socks off,” says Erin Dady, St. Paul’s director of marketing. “Maria brings a positive energy and attitude to every meeting.”

Cyndi Lesher agrees. She’s an Xcel Energy executive on loan to the convention’s Host Committee, a local organization set up to raise money and recruit volunteers for the convention.

“Maria has all the political savvy in the world,” Lesher says. “And you can tell that she loves it; it’s in her blood, and she’s passionate about what she does.

“She and I clicked instantly. She’s all about working hard but having fun and enjoying the experience.”

Cino and Lesher both are counting down the days until the convention starts, and they work the number easily into conversations. It was 173 days when I interviewed Cino on Wednesday, and Lesher knew the number when we talked Friday.

Cino also shows she’s assimilated herself into Twin Cities culture, with off-hand references to Ordway events, restaurants and neighborhoods and, in particular, the Museum of Russian Art in south Minneapolis.

“I’m a big fan of Russian art, and I’ve been to the museum several times,” she says.

She and others on the staff who are living here through the convention have been on field trips to Stillwater and Red Wing. There’s a group of theater fans that goes together to dinner and then to the Ordway. Others, not Cino, have steak-and-scotch nights and then go see the Wild. Some went ice fishing, sans Cino.

She took a group to the State Fair last summer. Twice.

Cino’s cold roots prepared her for Minnesota winter
Cino is a native of  Buffalo, N.Y., so Minnesota’s winter hasn’t fazed her too much.

“It’s not so much the snow — I’m used to way more — it’s the cold. Someone explained that it sometimes gets too cold here to snow,” she says.

Her political career goes way back, to sixth grade. “My teacher was a precinct committee woman, so I worked on campaigns, calling on the old dial phones, writing down names and keeping them in a shoebox; there weren’t computer databases back then,” she says.

Her Catholic parents were Democrats. “I’ve converted them,” she says. From the Democratic Party, not Catholicism.

In college, she studied political science and got an internship in Washington, D.C., with the National Republican Congressional Committee. Fifteen years later, she was running the group.

Her resume also includes appointment by President Bush as deputy secretary of the U.S. Department of Transportation, where she served from 2005 to 2007, and a short stint as acting secretary of transportation during a transition period.

Earlier, Bush had appointed her assistant secretary and director general of the U.S. Foreign Commercial Service, where she supervised 1,700 employees and had a budget of $200 million.

She has a residence in Alexandria, Va., and returns there regularly to pay bills and visit her goddaughters who live across the street.

One of those girls, a 9-year-old, is coming to visit in a few weeks. “We’re going to see the sights and go to the Ordway, and, of course, the Mall of America,” she says.

“I’m going to take the staff to dinner, and when we get it all cleaned up, I hope to spend some time in Italy,” she says.

And after that time for decompression?

“I’m going into the private sector,” she says. She confides that she’s been saying that for years, yet keeps answering the call to take government or political jobs. But this time, she says, maybe it will happen.