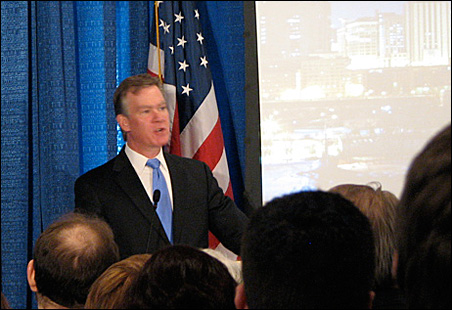 The mayor’s staff was a little nervous today, when Chris Coleman stepped to the podium at the new Wilder Center in St. Paul to begin his annual State of the City speech.

Mayor Coleman was, as they put it, “winging it.”

He spoke with no teleprompter, no written-out speech, just some note cards that he glanced at occasionally to make sure he had a name or place correct.

And he pulled it off just fine.

Except maybe for the reference to “Mayor” Lantry, instead of City Council Member Kathy Lantry.  And even that gaffe, Coleman was able to finesse. It was just a slip of the tongue, he told the gathering, not an announcement or a code or anything.

By the time he’d finished, there were some sighs of relief from the staff, as Communications Director Bob Hume and Chief of Staff Sarah Grewing acknowledged some concerns about how it would all turn out.

One staffer noted: “There might have been a half-dozen people in the audience who are mad they they weren’t acknowledged, but that’s what happens when you don’t write everything down.”

Deputy Mayor Ann Mulholland said she was nervous, but noted that the mayor likes to speak from the heart, not from notes. And although the staff might prefer the certainty of the pre-programmed script, they agreed to let Chris be Chris.

He talked about education and the light rail line. Mayor R.T. Rybak was there, along with four members of the City Council; the three others – Lee Helgen, Dave Thune and Pat Harris — were at a national League of Cities Conference, he said.

Setting was new Wilder Center
Coleman also said he’d tried to persuade his staff to skip the speech and just let people tour the new Wilder Center, which has opened but will be dedicated this spring. It sits at Lexington Parkway and University Avenue, the site of the old Lexington Park, where the St. Paul Saints used to play in mid-century.

The speech was given in what used to be right field of the old ballpark.

Coleman noted that some of the words and short phrases imprinted in stone on the Wilder building’s exterior reveal the real state of the city: “Remove Barriers, Demonstrate Stewardship, Value Elders and Seize Opportunities.”

I walked around the building later, reading the messages, and couldn’t find one that said: “Wing It Sometimes.”

Any minute now Spring will unlock her door,
windows in every corner of this capital city
will be flung wide open to greet her,
and we will celebrate with a noisy parade.

Meanwhile, we wait. Driving north
on Dale Street in the dark of early night,
admiring the new in this old neighborhood,
where promised that required heavy lifting
have been kept, I don’t see the SUV,
big as a bungalow, following me,

Honking. Honking. Road rage? Blinking lights.
What had I done? The driver was resolute
in his honking, blinking, following close.
Finally, crowding me to the curb,
he rolled down his window to shout,
“Turn your lights on. It’s dangerous
to drive without lights,” and so it is,

With lights on bright, we progress
in our livable city, where this sort of initiative
has taken root. We look out for each other.
We don’t forget the endless war,
the broken bridges, the broken veterans
who move as quietly, and with the same
hopeful energy, as undocumented workers.

We do not halt progress.
We meet it like Spring,
and do what must be done
to help it sprout and grow.