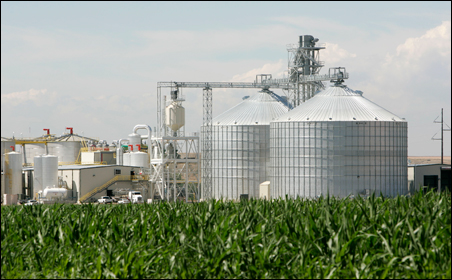 REUTERS/Rick Wilking
A proposed Minnesota corn-ethanol plant, like this one in Colorado, offers both jobs and potential environmental impacts.

The Minnesota Pollution Control Agency (MPCA) has ordered an environmental impact statement on a proposed corn-ethanol plant, Agassiz Energy, near the small northwestern town of Erskine, Minn., a move that’s certain to rile a corn-ethanol industry that has encountered growing concern over the environmental and energy cost of producing the biofuel.

It is the first time that a full review would be completed on any ethanol plant in Minnesota, where 17 plants already are operating and nearly that many are on the planning horizon.

“We are obligated to understand the environmental impacts of proposed facilities,” said MPCA Commissioner Brad Moore. “It’s what the law requires.”

But MPCA watchers said it is the first time in at least a decade that the agency has shown such regulatory spunk, especially involving an agricultural industry that enjoys unusual political support.

“I’ve been in my job for eight years, and this is the first time that the MPCA did anything that we’ve requested,” said an elated Janette Brimmer, an attorney with the Minnesota Center for Environmental Advocacy. Environmental advocates, some legislators, and even by some members of the MPCA’s own Citizens’ Board, openly question why so many ethanol plants have been approved without fully understanding groundwater effects. The plants consume from 4 to 10 gallons of water for each gallon of ethanol produced.

Groundwater use is growing fast
This year the combined production of all plants in Minnesota will surpass a billion gallons of the biofuel and nearly twice that in the next five years. That means that up to 7 billion gallons of water would be drawn in 2008 for ethanol production, most of it in drier parts of the state where water supply is little known or limited.

In January, Moore asked the state’s multiagency Environmental Quality Board to undertake a broad review of the groundwater implications of ethanol production, a study that could take a year or more to complete. Further study of controversial issues is generally viewed as a politically safe way to show “progress,” but the MPCA action taken earlier this week is the kind of assertiveness that attracts attention. 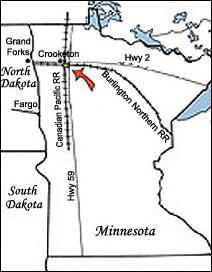 It also involves political risk. Already there’s concern over the economic impact of the MPCA action to order a full environmental review of Agassiz Energy‘s $130 million, 70 million-gallon capacity plant to be built near Erskine (pop. 425), located a few miles east of Crookston in Polk County.

“We don’t have a budget to pay for an environmental impact statement,” said Don Sargeant, board chair of Agassiz Energy, which has been planning its plant since 2004. He estimated it could take about 18 months and at least $500,000 to complete the review ordered Tuesday by a 6-0 vote of the MPCA’s Citizens’ Board.

Erskine looks forward to new jobs
“This could force us to cancel the plant,” Sargeant said. Erskine city officials testified at the MPCA Board meeting earlier this week that the ethanol plant would be the city’s largest-ever economic project that would provide hundreds of construction jobs to build the plant and up to 40 full-time jobs to operate it.

Sargeant said the entire ethanol industry in Minnesota and elsewhere will be put on notice by the MPCA action, suggesting it could have a chilling effect on future corn-ethanol development.

“Even if we go through with a full environmental review, we have no assurance that the plant would be approved,” Sargeant said.

The action comes on the heels of a study by the University of Minnesota and other researchers that ethanol production from corn consumes more energy as it saves and produces much more carbon than it reduces if new land is tilled to produce the corn. That study irked the ethanol industry and some of its leaders criticized the university for its involvement.

Another key issue: coal-plant emissions
Among the key issues with the Agassiz plant are emissions from a coal-fired power plant that would produce energy for the facility. Most other plants in the state use natural gas, which produces far fewer and less toxic emissions than coal.

The Agassiz plant would daily burn 375 tons of coal for a plant designed to operate around the clock. Carbon emissions would be significant, but so would fine particulates and mercury — which, MPCA officials said, constitute significant effects that by law must be analyzed with a full environmental review.

Sargeant said that Agassiz officials are huddling to consider substituting a gas-fired energy plant in hopes of getting the MPCA to order a less-costly review.

Mike Rafferty, a program manager in MPCA’s environmental-review section, said that a new energy source would constitute a new application by Agassiz Energy, something that would trigger another review that could take up to six months to complete.

But air emissions are just one of several potential impacts of the facility.

As proposed, the Agassiz plant would draw about four gallons of water for every gallon of ethanol produced, or about 280 million gallons per year.

“This is a best case scenario from a supply standpoint,” said Jim Japs of the DNR’s waters division.

However, another resource agency, the U.S. Fish and Wildlife Service (FWS), said that much more information is needed to understand how tapping into the groundwater will affect surface waters. Laurie Fairchild of the FWS area office in Bloomington said that if the aquifer is “fractured” it could disrupt the many surface wetlands and lakes that dot the area of the plant. Many of the wetlands, she said, are federally protected Waterfowl Production Areas.

Fairchild said her agency is also concerned about the air emissions — especially mercury, in view of the rising levels of mercury in fish throughout the state. As well, there is concern about lights and noise at an industrial facility in a rich wetland area, and the impacts of that on waterfowl and other wildlife.