The guy with no name is making a name for himself in the race for the DFL endorsement in the 3rd Congressional District, which covers the western suburbs. 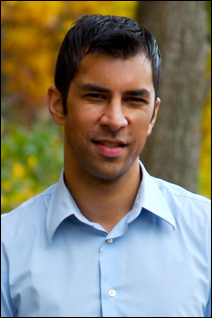 Ashwin Madia, a first-generation American and a first-time politician, is leading in the delegate count as the final round of district conventions open this weekend. So effective has the 30-year-old Madia been in gaining delegate strength that Edina Mayor Jim Hovland surprised most by “suspending” his race Thursday for the endorsement.

Hovland, 60, is the man who received big hugs from so many DFLers, including Rep. Betty McCollum, when he announced in September that he was leaving the Republican Party to become a DFLer.

He was encouraged by many in the DFL to run for the 3rd District seat, which was owned by Jim Ramstad, who has announced plans to retire after nine terms. In January, Hovland decided that he’d do just that — he’d run for Congress as a DFLer, believing that he fit the district’s moderate politics perfectly.

Hovland a good fit for district but apparently not for delegates
In fact, he may be a perfect fit for the district.

But he’s not a perfect fit with the activists who take the time to involve themselves in party conventions.

At every convention he attended, he received warm applause and ZERO delegate support. He left the race, saying in a brief e-mail to reporters that he’d support whomever wins endorsement but would “re-evaluate my options” if there is no endorsement at the April 12 Congressional District Convention. In other words, he left the door open to participate in a September primary race.

And for the moment, endorsement is not a sure thing.

The race is down to two:  the outsider, Madia, versus state Sen. Terri Bonoff, who has the support of a long list of current and former elected officials.  By most counts, Madia has about 49 delegates and Bonoff, 46. There are six more district conventions — where 53 delegates will be selected — to be held Saturday. It seems unlikely that either candidate can pick up enough delegates to hit 93, the number needed for endorsement.

Update: Madia continued his relentless drive to endorsement over the weekend, winning the majority of delegates in five of the six district conventions. Although he built his lead over  Bonoff, he remains a handful of delegates short of the 60 percent needed for endorsement, meaning he will have to garner support of the 22 superdelegates (elected officials in the congressional district) who so far have leaned heavily to Bonoff.

According to Madia’s campaign, Madia won 32 delegates Saturday, giving him 81 of the delegates from district conventions. Bonoff picked up 17 delegates, giving her the support of 63 for the April 12 Congressional District Convention.

What Madia is showing is that Minnesota’s endorsing process offers no guarantees to big names and all sorts of opportunities for unknowns. Critics of the system might say it rewards those with little chance of winning a general election and punishes those who could win. 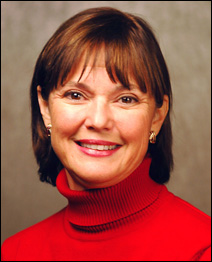 But that’s a debate for another day.

And since announcing his candidacy Oct. 23 — “who’s he?” was the most common reaction — he’s not stopped working on this race, a fact that Bonoff acknowledges with some frustration.

She’s often tied up in the legislative session. He’s free to campaign.

“He quit his job to run,” she said. (That’s true. He quit his job as an attorney with Robins, Kaplan, Miller & Ciresi). “He’s not married (true). He lives in an apartment (true) and, well, he has no other responsibilities. He’s on the phone night and day with delegates” (also true).

Bonoff, 50, has caught considerable heat from some of the DFL’s older women activists in the district because she’s been a longtime supporter of Obama. In a way, she says, that support dates to the 2004 Democratic National Convention, when she and one of her sons watched his convention speech on TV and were moved.

“We both said, ‘That’s the future of the party,’ ” she recalled.

He now works for the Obama campaign. She takes heat from some for not standing by a “sister.”

“They’re both great candidates,” said Bonoff of the presidential race. “But I can hardly switch now.”

As a candidate, she talks about reaching across the aisle, as Obama does. But mostly, her campaign sounds like Clinton’s. She points out her experience — as a businesswoman, mother and successful politician in the district. She also said that her campaign decided to invest in a poll, which showed that she is capable of beating Erik Paulsen, the state representative from Eden Prairie and the only Republican candidate for the Ramstad seat.

“I can beat Ramstad; the poll shows he can’t,” said Bonoff.

The Madia campaign says the poll numbers are too flimsy to have any meaning.

Candidates square off over experience issue
Implicit in Bonoff’s campaign is that Madia doesn’t have enough experience to represent the district. Sound familiar?

Madia, who graduated from Osseo High, the University of Minnesota and law school at New York University, has quick responses to those who question whether he has enough experience to represent the 3rd District.

He joined in part because of the deep sense of gratitude his parents instilled in him for the United States. They immigrated to the country from India with virtually nothing. His father became a successful microbiologist, and his parents raised three highly motivated, now-grown kids, including the candidate.

Like so many other pols in the state, the word that Ramstad was giving up his safe seat intrigued Madia.

“I always complained about Democrats not having the guts to stand up for what they say they believe in,” Madia said. “When Ramstad retired, I decided I’d better show some guts. I knew I was starting from zero. I knew I had no base. No money. So I told myself that if I was getting in, I couldn’t do it halfway or I’d get killed.”

The basic positions of Bonoff and Madia don’t seem much different. Perhaps the most noticeable difference is on Iraq, where she shows more insistence on getting out as quickly as possible. He talks about getting most troops out, but with the understanding that 10,000 to 20,000 troops may need to stay for a long time while the United States tries “to move away from a highly complicated situation.”

Debate is as much about passion as political stands
His surprising strength does not seem to be so much about his political positions as his passion. Sound familiar?

When he is at a district convention, he has his supporters round up any delegates who aren’t wearing somebody’s campaign button. Then, he meets with the group, speaking well and earnestly. By the time he’s done, at least a few more folks typically are wearing “Madia” buttons.

Despite his delegate lead, Madia is pushing the idea that he’s the underdog.
“I try to fire up my team every day,” he said. “I tell them she’s a great candidate with a great team, so we have to work harder. We have to be up an hour earlier and go to bed an hour later. That’s the only way we can win.”

The difference between these two might best be summed up in their answers to the question: What happens if you lose?

“All I’m thinking about is winning this endorsement,” said Madia. “I’m putting everything I have into that.”

“I’m giving this everything I’ve got,” she said. “But no matter what, I have a wonderful life, with wonderful kids and a wonderful husband.”

But into every wonderful life a little rain must fall. In her case, the rain is this unknown who, delegate by delegate, is becoming known.