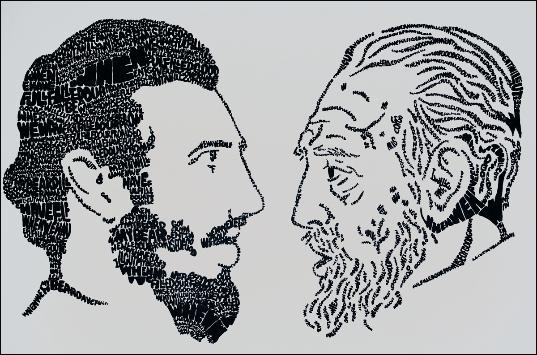 Image courtesy of the artist
Phil Hansen painted this image of Fidel Castro, when he was young and old, with a quotation from a 1959 interview.

It makes sense that artist Phil Hansen spends half his week taking pictures of a steady stream of broken ankles, bent backs and cracked ribs as an X-ray technician for Regions Hospital.

One glance at Hansen’s large-scale artwork reveals he is obsessed with layers and the fragments that lie beneath them.

In fact, everything the 28-year-old Hansen creates is like a conceptual X-ray that requires further inspection. His 9-foot-tall paintings often appear as perfectly formed images from far away. Up close, they become a bundle of new compositions. One, for example, has the names of dead soldiers filling up the face of President George W. Bush.

When I tell him that X-raying seems like a good fit for an artist preoccupied with images emerging from something else, he seems confounded. “I never thought of that,” he says, looking away from his computer in his brother’s Eden Prairie home. “I just wanted to find a job I knew could help me pay the bills while I did my artwork.”

Web celeb
When Hansen isn’t X-raying or creating see-through art, he spends the remaining of his 60 or so waking hours behind a video camera. Hansen is one of the first artists to use YouTube as an art gallery. Hansen’s high-speed videos for the Text Generation offer a behind-the-scenes glimpse of his obsessions with magnitude and minute details.

That ability to entertain with art — and the curious impermanence of the pieces — has turned Hansen into a web celebrity (er, a web-e-lebrity?) of sorts. His more than 60 videos on YouTube have racked up tens of millions of hits, including a fascinating one where he creates Chuck Close, the king of self-portraits, on an expansive piece of asphalt from more than 2,000 tiny chalk stick-figures. Another popular one has rocker Jimi Hendrix made of matches. 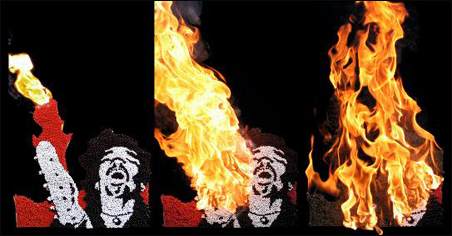 Image courtesy of the artist
Hansen created this triptych of Jimi Hendrix with matches — and then lit it on fire.

And in recent weeks, Hansen has become a sort of viral phenomenon. He is being courted by “The Late Show with David Letterman.” In an email with the show’s researcher, he is asked if he can spend a 35-minute segment creating a “karate-chop” art piece of Biff Henderson — Letterman’s dry-humored stage manager. Hansen first used this technique to create an image of Bruce Lee. That video has drawn more than 2.1 million YouTube views.

In a profile on Yahoo! News last summer, writer Kevin Sites called Hansen an artist who gives pointillism a modern twist. “You might call it ‘kinetic fragmentism’— pointillism in motion,” Sites wrote about Hansen’s technique. That story received more than 3,000 comments, and Hansen’s website was ping-ponged with constant hits for weeks.

As an art-school dropout who moved here from Seattle in 2006 (he grew up in western Washington) so that he could pursue art full time, real-world details like paying the bills are part of Hansen’s meticulous plan. Hansen is determined to become a successful painter, illustrator and multimedia artist. So much so, he spends nearly 30 hours a week carving out his goal. Right now, he helps pay his bills by selling photos and leftover pieces of his destroyed “Goodbye Art” online. Sometimes he can make as much as a couple hundred dollars a week; other times nothing but bills roll in.

For Hansen, the ultimate success would be scoring gallery showings for his über-detailed political pieces: that portrait of George W. Bush made from the names of dead soldiers (“As of April 30, 2005”);  civil rights advocate Rosa Parks made from Bible verses (“Bible Interpretation Number 1”);  North Korean dictator Kim Jong Il made from bandages dipped in Hansen’s blood (“Value of Blood”).

But getting into galleries often requires crackerjack kowtowing and acrobatic hobnobbing, skills an introverted Hansen has yet to unearth. Instead, he gravitates toward the solo sanctuary of cyberspace, where he spends tireless hours making “Goodbye Art,” a weekly video-art project he posts on YouTube and his website, philinthecircle.com.

In MTV-style time-lapsed videos, Hansen creates — and sometimes destroys — 24-hour projects, like a recent image of Saddam Hussein he made from a bunch of sponge-starred T-shirts.

Lost in his art
Life as a busy solo artist can become isolating. Since moving to the Twin Cities nearly two years ago, Hansen admits he has gone on only two or three social outings. He says he doesn’t really know anyone in town, and confides he is totally in the dark about the local art world. Instead, he spends most of his time creating, and connecting with his fans — and his detractors — online.

While he turned down the Letterman gig at first, Hansen now says he wants to do it to expose more people to his art. Yet in what is revealing itself to be typical Hansen fashion — an itch to see what’s underneath — he also wants to understand more about Biff before he creates his likeness by karate-chopping a canvas.

“Do you know anything about Biff Henderson?” he asks me in earnest. “I mean, what he was like when he was younger? What else has he done?”

I have nothing for him, other than the fact that I think he wears a headset.

Hansen also recently received a request to create an image on “The Today Show.” This time, the show’s producers didn’t detail any design specifics; the email just asks if he’s willing to do something live on air. So Hansen has decided he’s going to create a portrait using food he chews up and spits out. (My vote is to see Matt Lauer get remade as Cheetos gob.)

All of the producers found Hansen the same way millions of others have: through the Internet. Hansen’s ascent to YouTube stardom began last summer, when he turned the garage of his brother and sister-and-law’s home into a six-day art studio.

With help from more than 600 people from all over the world, Hansen created “A Moment.”  He began by posting a video online asking people to call him with their tales, to distill their life into a single phrase or turning point. He received more than 600 calls in six days, all while living in the two-car garage.

The result is a circular image of Hansen wrapped by a series of hands. Every detail of his face was created from callers’ stories, single words or moments that changed their lives forever: “Leukemia;” “Harry Potter;” “My three girls;” “Being diagnosed with bipolar, because it made life make sense.” There’s something melancholy and beautiful about every one of them.

Close-up, Hansen’s face disappears from “Moments,” and only the stories remain. It’s hard to turn away from them. It almost feels like prying.

When asked what, besides his own skin, connected Hansen to the stories of the 600 people — what single story was beneath the outermost layers of himself on the canvas — Hansen grimaces. “I don’t like to talk about that,” he says. “I don’t talk about that with anyone, really.”

Creativity and cruelty in cyberspace
To be sure, Hansen comes off differently in person than he does online. In cyberspace, he is big. Secure. In real life, he seems smaller, though still as affable and humble. And it was that misconception — the idea that he wasn’t really understood by many online viewers — that led Hansen to temporarily yank “Goodbye Art” back in October.

“You won’t believe the stuff people say online,” he says. “They say things they would never say in reality. They say horrible, racist things. And they pretend they know me, when they know nothing about me,” he says, shaking his head.

“I wanted to do this because I like the idea of exposing people to art outside of galleries,” he says. “So I can’t read comments like I used to, or else I wouldn’t be able to do this anymore.”

While Hansen’s diligence and skill are apparent in his video shorts, his deeper, pointillism-inspired technique and talent are in his permanent pieces. For the image of Kim Jong II, for example, Hansen’s sister-in-law, a doctor, did two blood draws on Hansen just to get enough red fluid to make the image.

“I knew that unless I did it in something like blood, it wouldn’t have the same impact,” Hansen says. “People weren’t looking at North Korea as a real threat. It was mostly ignored. And I wanted to do something so that people would maybe stop and think about it, even a little bit.”

It worked: After he posted the creation in a time-lapsed online video, he got a call for an interview from a South Korean radio station, which also broadcast the interview in North Korea.

“I know I can’t do the ‘Goodbye Art’ stuff forever,” Hansen says. “But if it exposes people to my other pieces, if people start to ask questions, then I know I’ve done something. And ultimately, that’s all I want to do.”

In other words, they form the skeleton of Hansen’s art. It’s the layers beneath — the bits that make up the anatomical whole — that Hansen hopes his viewers see.

Molly Priesmeyer, who writes about visual art, can be reached at mpriesmeyer [at] minnpost [dot] com.