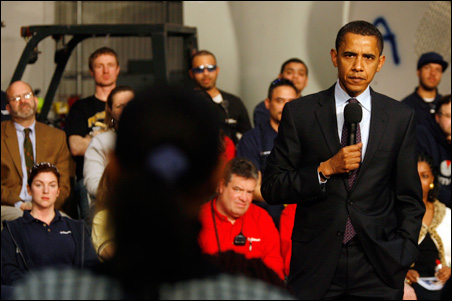 Sen. Barack Obama’s victories Tuesday in the Mississippi primary and over the weekend in the Wyoming caucuses settled little in the Democratic presidential race with Sen. Hillary Rodham Clinton. Obama still leads in the delegate count, but neither candidate has enough delegates now to claim the nomination.

With six weeks to go before the Pennsylvania primary, the race promises to become even more heated, posing a problem for the candidates, particularly Obama: How tough and personal should they get?

Jeff Zeleny writes in The New York Times that “there is frustration and anger among his [Obama’s] supporters, advisers and contributors about the Clinton campaign’s attacks on him — and still-unresolved tension about how far he can go in striking back without sacrificing his claim to be practicing a new brand of politics.

“The conflict was given new life on Friday [March 7] when Samantha Power, a close friend and a senior foreign-policy adviser to Mr. Obama, resigned after referring to Mrs. Clinton as ‘a monster.’ ” Power, an upaid adviser to Obama, apologized. According to the Times, Obama “admonished” his staff not to get caught up in a “negative back-and-forth” with the Clinton campaign.

The dilemma for Obama is that if he doesn’t respond, he risks looking weak or worse, losing elections (for example the Texas and Ohio primaries). But if he responds too strongly or harshly he risks tarnishing his image as the new, visionary politician.

“The Democratic campaign may be providing [Sen. John] McCain with a plan for the fall no matter who wins,” writes Mike Madden in Salon.com.

“To the GOP, the lesson of Clinton’s comeback is simple: attack, attack, attack.” Madden quotes McCain adviser Charlie Black as saying about Clinton that “she went on the attack on about three fronts and got him on the defensive. What you’re gonna find out now, we’re gonna find out how tough Obama is. If he has a glass jaw, she just broke it.”

The Clinton campaign’s criticisms of Obama picked up steam before the March 4 Ohio and Texas primary with the famous phone-call TV ad asking who would be better qualified to handle a crisis in the middle of the night. Clinton has also questioned Obama about advisers soft-pedaling his stands on free trade and when to pull out troops from Iraq. And she has basically argued that he gives a great speech, but offers little policy substance to back it up.

“Embroiled in an increasingly tough fight and frustrated at Mr. Obama’s success and what the Clinton campaign claimed was coddling of him by the media, she began launching the very kind of attacks that will almost certainly be raised in a fall campaign should Mr. Obama win the nomination,” explains Adam Nagourney in The New York Times. “She attacked his ethics and suggested that Mr. McCain would do a better job of protecting the country in a time of danger.”

Nagourney goes on to suggest that the timing of the attacks is based on a strategy to win over superdelegates. “These are Democrats who are going to think about electability and are going to consider just how vulnerable Mr. Obama is to these kind of attacks — and more than that, whether he has the fortitude to withstand them. It is a high-risk strategy for Mrs. Clinton — one that might come to define her legacy as much as anything else. But it may be the only choice she has.”

While he seems to be leaving some of the heavy lifting in responding to attacks to his staff, Obama made no bones about what he thought of the idea of  his becoming Clinton’s running mate.

“I don’t know how somebody who is in second place is offering the vice presidency to the person who is first place,” Obama said, drawing cheers and a long standing ovation from about 1,700 people in Columbus, Miss., according to the Associate Press.

“I am not running for vice president,” Obama said. “I am running for president of the United States of America.”

No matter what Obama and his followers think of the Clinton campaign criticisms, they seem to be working, at least in the short-term. The latest Newsweek national poll among Democrats shows that “Clinton has erased the once-commanding lead that Obama held in most national polls following his 11 straight victories in February’s primaries and caucuses. Obama is the favored nominee among 45 percent of Democrats, compared with 44 percent for Clinton, according to the poll, which was based on telephone interviews with 1,215 registered voters March 5-6.

The poll found that Clinton’s phone-call ad benefited her campaign. Forty-five percent of Democrats “said they would trust Clinton to answer the red phone in the wee hours, while only a third felt that way about Obama,” according to Newsweek.

Obama is likely getting more advice than he needs from advisers, other politicians and columnists. Caille Millner, an editorial writer for the San Francisco Chronicle, offered some interesting tips of her own: “If he attacks the Clintons using gutter politics, he’ll lose — those are the tactics that they excel at, and he can’t beat them at their own game. More importantly, he risks losing his message and his base by stooping to their level.” She says Obama should ignore McCain and focus solely on Clinton. “Be an iron fist in a velvet glove. There’s no need to be impolite to Clinton. Let your surrogates be nastier than you are — up to a point. … Obama should have a couple of his supporters who worked in the Clinton White House remind people that Hillary Clinton has no experience with foreign-policy crises, no experience with economic policy, and that her one experience with health care was a disaster from start to finish.

“Get on the bus. Town hall meetings in endless succession. Photo ops with his sleeves rolled up while in conference with working-class voters about their fears and wishes. … Obama’s got to show the skittish undecideds that he works as hard as Clinton does.”