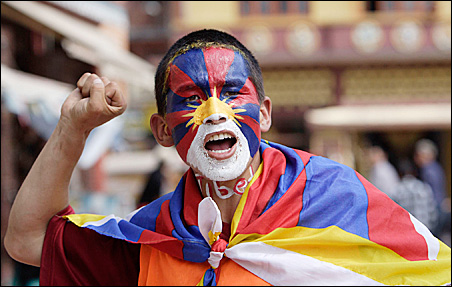 REUTERS/Gopal Chitrakar
A Tibetan shouts “Free Tibet” during anti-China rallies Sunday in Kathmandu. The capital of Nepal is home to about 20,000 Tibetan refugees, who were forced into exile in 1959.

There are 145 days to go until the first athletic event of the 2008 Beijing Olympics. But the political activity that was expected to swirl around the global extravaganza has ripened sooner than anyone could have imagined.

“If China is willing to use the Olympics as a tool for international recognition, we are going to be more than happy to showcase to the world the violations of human rights in Tibet,” Kalsang Phuntsok, the president of the Minnesota Tibetan Youth Congress, told MinnPost. The demonstration in Chicago comes a week after the 49th anniversary of the Dalai Lama’s exile from Tibet and amid allegations in the Chinese media that the spiritual leader and his followers are personally fomenting riots in the capital of Lhasa timed to the Olympics. But there is, according to most reports, a crackdown by Chinese troops in Tibet and a neighboring province, with some Tibetans dead, perhaps as many as 80, as ethnic violence has spread.

Meanwhile, last week, Human Rights Watch issued a report about the working conditions of the more than 1 million migrant workers on Olympic facilities in Beijing. The report spoke of squalid housing, poor or no pay and no health care.

Olympic officials quickly work to quash boycott threat
The Tibet events forced the president of the International Olympic Committee to declare once more that a boycott of the Games was folly.

“We believe that the boycott doesn’t solve anything,” Jacques Rogge, the Belgian surgeon who heads the IOC, told reporters last week. “On the contrary, it is penalizing innocent athletes …”

Rogge better get used to answering the boycott question.

Later this month, the group “Dream for Darfur,” which has been pressuring the Chinese government for its support of the Sudan government, will release a report card on the progress it’s made pushing Olympic corporate sponsors to denounce China’s Africa policy. This strategy is making official Olympic sponsors nervous and even Advertising Age, the industry weekly, has urged Olympic sponsors to make noise about China’s human rights policies.

On April 9, when the Beijing Olympic Torch Relay lands in San Francisco, a coalition of activists plan to greet it and demonstrate against — you name it — human rights violations, Darfur, the exile of the Dalai Lama.

The pace is astonishing, fueled by an active Internet, a roiling YouTube and a deep fascination for how Chinese authorities will respond to criticism and violent protest.

Chinese leaders have responded, and head on. They understand the need for damage control.

Darfur issue also sore spot for Chinese leaders
On the Darfur issue — in which China relies on Sudanese oil and reportedly has supplied weapons to Sudan in its war against rebels — China’s special envoy on the matter held a March 7 news conference in Beijing. The first question from a journalist was about an Olympic boycott.

Ambassador Liu Guijin said, according to an official translation from the Chinese Ministry of Foreign Affairs: “More and more political leaders as well as people in the sport and other communities around the world have realized it goes against the Olympic spirit to politicize the Beijing Olympic Games and it is fiddle-faddle to link the Beijing Olympic Games with the Darfur issue. China has made active and constructive efforts on the Darfur issue, which has been widely recognized by the international community. A tiny number of people who want to bring shame on China with the Darfur issue are doomed to fail.”

On the migrant worker matter, a Foreign Affairs Ministry spokesman was quoted by international news services as saying: “I believe that everybody is well aware that Human Rights Watch has some problem with its sight. It is biased. It has some problems with its eyes. It has weakness in seeing things properly.”

Xinhua, the official China news service, said Sunday of the Tibet riots: “In an effort to fan up the international community to link the ‘Tibet issue’ with the Beijing Olympics, [the Dalai Lama] repeatedly preached during his frequent international trips that the year 2008 is of key importance and the Olympic Games would be the ‘last chance’ for the Tibetans. …

“After the riot broke out in Lhasa, the Dalai clique maintained real-time contacts through varied channels with the rioters and dictated instructions to his hard-core devotees and synchronized their moves, police sources say. Evidence again mounted against the Dalai coterie’s trumpet for ‘nonviolence,’ exposing them as a deceitful bunch.”

Chinese news service tries to separate sports, politics
For Xinhua, sports and politics are somewhat separate. There isn’t any mention of Tibet or calls for boycotts on the news agency’s official Olympics page, which, otherwise, is a marvelous prism into how the Chinese view the Games.

This turbulence, of course, is exactly what the Chinese government does not want as the world turns its eyes to the booming economy, the thick pollution and the incalculable investment in infrastructure driven by the Olympic project.

Boilerplate paragraphs in international dispatches linking the Olympics with political unrest or human rights controversy are now commonplace, with the New York Times, for instance, almost word-for-word, repeating this phrase in its Saturday and Sunday stories: The Tibet riots have “created a major political and public relations challenge for the ruling Communist Party as Beijing prepares to play host to the Olympic Games in August.”

Prof says China intent on turning Games into ‘public diplomacy’
For many Chinese, the Games are an effort of “public diplomacy,” that is, a chance to show in a person-to-person way that China can be “a perfect host” and allow visitors to “have a better understanding” of China and its people. The Olympics are, according to surveys of Beijing residents conducted by Chinese research organizations, a sincere effort on China’s part to show how far the nation has come.

So says Zhong Xin, an associate professor of journalism and communication at Renmin University in Beijing and currently a research fellow at the University of Maryland.  Zhong spoke earlier this month to a conference of Olympic journalists (including me) and a group of University of Iowa students.

A skeptic can easily question the validity of a survey conducted under the auspices of the Chinese government and the Beijing Olympic Organizing Committee, and a survey that showed overwhelming support for the Games. But Zhong is a scholar of Chinese news dissemination and she believes that, in the end, the Olympics will “open a wider space for the domestic coverage” of news.

She is working with the group called OGGI, or “Olympic Games Global Impact,” which will measure the Games’ effects on China.

Sunday, in an email to MinnPost.com, Zhong said she wasn’t surprised by the current riots in Tibet. Besides the anniversary of the Dalai Lama’s exile, the riots also have occurred as the National People’s Congress has been under way in Beijing.

The Congress is “sometimes used by pressure groups to raise their issues via protests,” Zhong wrote from College Park, Md.

“The Tibet issue is an old issue, though the riots will make China look bad and might make some people worry about the Games,” she said. “However, the world is watching how the Chinese government will deal with and handle the issues, which might be new to the world. If the Chinese government can manage the issues successfully and show its capability in dealing with difficult situations, this crisis can turn into positive opportunities for public diplomacy for China, in my opinion … All the pressures and challenges are also chances for the Chinese government and China to show its wisdom in dealing with tough issues.”

Said Twin Cities Tibetan leader Phuntsok: “I think the world needs to pressure China to see independently what is going on in Tibet. China needs to be put under a microscope.”

Wrote Zhong, the Beijing scholar: “Media event experts in the West indicated that the bigger the media event, the more possible it will be hijacked by different forces. I would like to see more supportive efforts to make the world’s Olympic event come true and become a happy party of the world.”

But as busloads of Minnesota’s Tibetans prepare to go to Chicago, it’s clear the tough issues will only get tougher for the Chinese government. As Aug. 8 approaches, the political heat around the Olympic Flame will only get hotter.