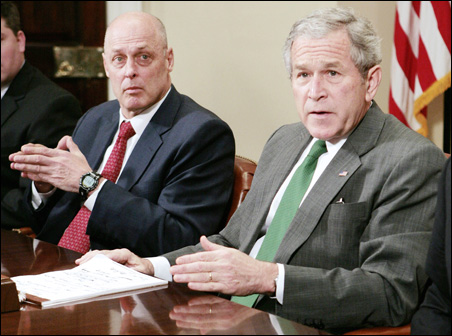 Although the Federal Reserve’s emergency actions over the weekend averted a financial plunge, uneasiness over the U.S. economy was palpable Monday as both President Bush and Treasury Secretary Henry Paulson took to television in an effort to calm the public.

Today, Asian markets rose for the first time in four days, the New York Times reported, while “nervousness pervaded Wall Street despite efforts by the Fed and the Bush administration to soothe investors and assure them that Washington will do everything in its power to restore order to the financial system.”

Though there was some grumbling about the wisdom of bailing out bad actors, most experts suggest that the Fed did what it had to do in engineering a fire sale of rapidly failing Bear Stearns. Washington Post business columnist Steven Pearlstein wrote, for example, “With the Fed’s decision to put $30 billion behind the rescue of Bear Stearns and open its lending window to investment banks, we’re deep into bailout territory. Considering the alternative — a global financial market meltdown that takes the global economy down with it — this was probably the right thing to do.”

A little breathing room
While the Bear Stearns rescue got the headlines, other Fed actions are expected to give the markets breathing room for larger remedies to take place. Maria Godoy of National Public Radio wrote, “Perhaps the Fed’s most significant move over the weekend was the creation of a new program to give emergency loans directly to the 20 largest so-called ‘primary dealers.’ These are investment banks that do business directly with the Fed and which purchase the majority of Treasury securities. In addition, the Fed lowered the discount-lending rate — that’s the rate which it charges banks for very short-term loans — by a quarter-point, to 3.25, on Sunday.”

What was at stake? Professor Charles Calomiris of Columbia University told NPR, “I think that we were really on the brink of a financial collapse, and I think the Fed saw it coming.”

Severe crisis averted for the moment, the question has turned to broader questions: What can be done to stabilize the U.S. financial system? Is it time for other entities — including the Treasury Department and Congress — to do more?

In its editorial this morning the New York Times said, “The Fed’s huge loans and interest rate cuts can buy time for flagging banks. They can also help prevent specific problems, like last weekend’s near collapse of Bear Stearns, from causing a chain reaction. They cannot save defaulting homeowners, transform bad mortgage loans into good ones, or do the same for hundreds of billions of dollars of securities tied to those loans. …”

Bailout seems ‘all but inevitable’
The editorial continued, “This week several Wall Street firms will release their latest results, and they will probably be ugly. The drive to raise capital will very likely get more intense. So the Bush administration should work with Congress now to prepare the taxpayer-financed bailout that seems all but inevitable. If Washington stopped acting as if it had no role to play, it might seem less desperate to foreign investors, and Mr. Bush might have another chance to persuade them to provide more transparency.”

The Times was not alone in urging more action from the administration and Congress. Princeton economist Alan Blinder put it succinctly in an op-ed piece in the Washington Post: “Earth to the White House and Congress: The Fed cannot do this job alone.”

In answer to his own question, “So what can be done now?” Blinder wrote, “First, everyone should take a deep breath. To those living far from the canyons of Manhattan, the sky is not falling. If you don’t want to sell your home, forget about falling house prices. Even on paper, it’s unlikely that you’ve ‘lost’ anything near what you ‘gained’ in the run-up. Yes, the economy is limping, but it’s not collapsing. And the effects of the Fed’s interest rate cuts and the stimulus package that Congress enacted last month are still to come.”

Among his prescriptions: Some “patient investors” should step up to the plate, and the nation’s financial houses “need to use the breathing space the Fed is providing to put themselves in order — post haste. They need to come clean, book the losses and, in many cases, raise new capital. If the capital must come from abroad, Americans must set aside their pride and/or xenophobia.”  And “we need leadership from political Washington. Forget the president. We need the Treasury secretary to take charge, not just to ‘support the Fed.’ While Paulson repeats his ‘strong dollar’ mantra, confidence in the dollar ebbs. How about doing something about it — such as a dramatic currency market intervention in concert with other nations?”

Looking to Congress
Blinder thinks, however, that the “best hope for leadership from Washington may now be in Congress.” He favors a bill being put forward by Rep. Barney Frank, D-Mass., and Sen. Christopher Dodd, D-Conn., that “by easing some of the stresses in the mortgage market, could do some real good.”

At a conference Friday hosted by the Hamilton Project at the Brookings Institution, University of Michigan Law School professor Michael Barr described the proposal this way: “The key features of this plan are threefold. One, a process to arrange for the bulk transfer of mortgages that are potentially in distress from their existing holders that face immense conflicts of interest and legal and tax barriers to the prompt and efficient restructuring of these loans to arrange an auction process for those assets to be transferred to new holders, to new lenders.

“That auction process would permit the loans to be transferred at a steep discount to current investors if there’s no bail-out and would be allowed to be transferred in a way that opens up the space for the second key element, which is a restructuring of these loans on affordable terms to borrowers, terms that make it much less likely that there’ll be default and foreclosures. And the third key element is a proposal to get funds into the hands — through state and local governments — into the hands of local nonprofits and others that can help deal with the very real crisis in neighborhoods in foreclosures…”

Others are beginning to show interest in such a plan. Matthew Benjamin and Alison Fitzgerald of Bloomberg News quoted Laurence Meyer, a former Fed governor, as saying “The Treasury and Congress have left the ball in the Fed’s lap.” But, Bloomberg said, “That may be changing. Yesterday U.S. Senate Banking Committee Chairman Christopher Dodd said Paulson is now more receptive to his plan to allow the government to insure ‘distressed’ mortgages. ‘I think there’s a greater receptivity to this idea than there was 48 hours ago,’ Dodd said.”

The article noted that on March 3 Paulson called the plan a “non-starter.” Today, it said, “he called such proposals ‘interesting.’ ”

Susan Albright is a managing editor at MinnPost who writes about national and international subjects. She can be reached at salbright [at] Minnpost.com.