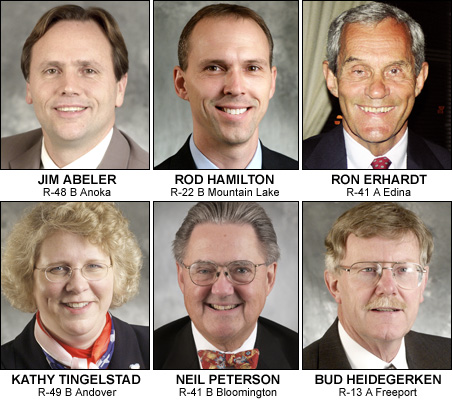 The last couple weeks, the fifth-term Republican state representative from Anoka was rebuked by his party’s leadership on the House floor, pilloried by local conservative talk-radio host Jason Lewis, eviscerated by right-wing bloggers and unable to garner the GOP endorsement for his re-election bid. But Abeler is unperturbed.

“Hey, I made it on YouTube,” he said last week, chuckling to himself. “I think about 14 people have watched it.”

The clip posted was of Abeler’s speech on the House floor during the Feb. 25 session to override Gov. Tim Pawlenty’s veto of the massive transportation bill that had passed just a few days before. Abeler defended his original vote for the bill, and made plain his intention to do the same with a charming, self-deprecating humor not often seen in Capitol debates. It’s a documentation of the votes that got him into so much hot water in the first place.

“I’m glad I did it more every day,” Abeler insisted. “Jason Lewis has had me for dinner every night, but I was out in my home district last night, and nobody cursed me out.”

In fact, much has been made about the so-called “override six” — Abeler, Rod Hamilton of Mountain Lake, Ron Erhardt of Edina, Kathy Tingelstad of Andover, Neil Peterson of Bloomington and Bud Heidegerken of Freeport — all Republican House members who disregarded their caucus’ wishes and the GOP governor’s veto stamp. Minority leader Marty Seifert, R-Marshall, made a show of stripping the six of their respective party leadership positions, and many angry Republicans have warned that the wrath will come election time in November.

But the members of the group, collectively or individually, have expressed little to no regret in helping pass the state’s first gas-tax increase in 20 years. Interviews with each of them in the Politics in Minnesota newsletter were tagged “Five ‘No Regrets’ and one ‘Water Under the Bridge,'” and that seems to sum up the attitude, according to Abeler.

“Half my caucus isn’t speaking to me, but I think we all feel we went with our conscience,” he said.

In fact, in a state where lawmakers are just as often elected because of who they are, rather than under what party banner they fall, the six legislators may be sitting just fine in November. True, the same weekend that Republicans did not endorse Abeler in his district, both Peterson and Erhardt actually lost their endorsements to rival Republicans, Jan Schneider and Keith Downey, respectively.

Erhardt, for one, believes he can attract more moderate votes down the line, and some observers are inclined to agree with him. And he even hints he might jump parties.

More to the point, if Republican die-hards look at their own districts, they might find that working against the gang of six might have an unintended consequence: flipping those seats to Democrats.

“Personally I think stripping them of their leadership was a mistake,” offered state Sen. Paul Koering, a Republican from Fort Ripley.

‘Party process is local control’
According to GOP state chairman Ron Carey, the party will not actively work against the overriders in their districts, at least as far as endorsements are concerned.

“The party process is local control, a guiding Republican principle,” Carey said. “We totally respect the right of the voters to make their decisions on their candidates.”

Still, Carey worked against Tingelstad at her endorsing convention, successfully getting local Republicans to postpone endorsing. But he points out that Tingelstad’s district is in his home Senate district.

Carey acknowledges that finding stronger conservatives — those who would not be incumbents — in these House districts could backfire. “There’s always a concern that you’re going to risk alienating some Republicans, those who would say, ‘I’m not going to vote for that person,'” Carey continued. “We’re serious about winning back a significant chunk of seats this year.”

But Carey made his feelings on the override clear. “Virtually all Republicans in the state believe it was a mistake to override the governor’s veto,” he said. “Our internal polling shows that most Minnesota Republicans are opposed to the gas tax.”

Erhardt said his endorsement loss to Downey had less to do with the gas tax than the campaign against him that’s been brewing for some time. “It’s because I’m not always voting the Republican platform on social issues, I’m not with the Christian coalition,” said Erhardt, who compared Downey unfavorably to U.S. Rep. Michele Bachmann, R-Minn. “[The loss] was not unexpected, by the way.”

Erhardt added that he believes Peterson’s loss did have more to do with the transportation vote.

Still, Erhardt said there are enough moderate voters in Edina that he can still win re-election come November, whether he runs against Downey in the primary, runs as an independent or flips to the DFL. “I haven’t decided, but those are my three options,” he said.

Erhardt, like Abeler, still exudes a sort of “bring it on” attitude, adding that he’s been the second-highest vote getter in his district, more than Pawlenty, more than President Bush.

“Most moderates will say, ‘I didn’t leave the party,'” Erhardt concluded, “but, ‘My party left me.'”

DFL eyes some seats
If the Republicans are left to lick some wounds, some in the DFL Party are licking their chops. With the current fracture in GOP circles on the gas-tax vote, there could be more than a small opening for the DFL to pick up House seats and win a veto-proof majority in November. (Democrats need to pick up five seats.)

That might be wishful thinking. But party leaders are certainly aware of what’s going on across the aisle.

“The Marty Seifert retribution might lead to ‘I’m disgusted with my party,” said state DFL chair Brian Melendez. “They might think, ‘I’m a moderate Republican, and they’re fielding a guy I can’t stand.'”

Still, Melendez knows that it takes more than just disgust to get voters to switch parties — the opposition has to come up with viable candidates. “I’m not one to commend Republicans, but it’s unfortunate, because those six folks did the right thing in the override,” Melendez said, adding that DFLers winning all those seats is “unrealistic.” “We’re not going to pick up all six. There were three or four other seats that we were targeting.”

Another prospect is getting any one of the gang to switch parties, something that might sound far-fetched, but Melendez doesn’t it  rule out. “We are in talks with at least one of them right now,” Melendez said, declining to name names. “If Ron Erhardt wants to come to our side, I would love to have him or anyone who switches.”

Abeler, for his part, isn’t talking about jumping ship, but he is buoyed by his non-endorsement endorsement, where he fell just 2 percentage points shy of the 60 percent needed for the party seal of approval. And the way he figures, if he loses 200 votes on the right, he might pick up 1,000 in the middle.

“I got 58 percent against my toughest audience, the people in my district,” Abeler said, adding that people told them they appreciated his vote even if they didn’t agree with it. “I told the 42 percent that I appreciated their case, and that it was a good day for conscience.”

G.R. Anderson Jr. writes about politics and the Legislature. He can be reached at granderson [at] minnpost [dot] com.

Click on map to view outstate districts 13A and 22B