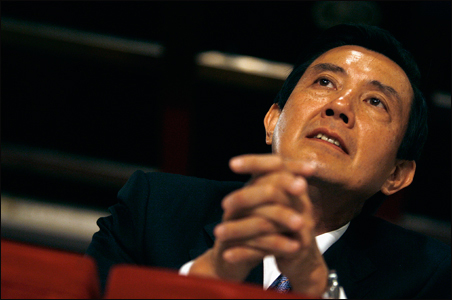 It is fair to say that the United States did not want to see big news coming out of Taiwan last weekend. Its wish came true with the Saturday election of Ma Ying-jeou as president. The former Taipei mayor, a Harvard Law grad and a pragmatic politician, will work to quiet the waters in the never-ending China cross-straits debate.

While the U.S. has been Taiwan’s strongest ally, to the point of pretty well guaranteeing the island’s defense should China ever invade, Washington had become exasperated with President Chen Shui-bian’s constant pushing of status-quo boundaries.

Tom Omestad wrote in U.S. News and World Report, “As Chen’s tenure went on, the Washington-Taipei relationship grew seriously strained, with some U.S. officials implying on background that Chen was acting recklessly. … The Bush administration took no position in the race, as is customary. But even in the world of muted diplomatic rhetoric, the collective sigh of relief in Washington was fairly clear — and immediate. President Bush said the result offers ‘a fresh opportunity for both sides to reach out and engage one another in peacefully resolving their differences.’ Bush’s remarks essentially endorsed the approach advocated by Ma, calling on both sides to pursue dialogue ‘and refraining from unilateral steps that would alter the cross-strait situation.'”

The situation he referred to is one of the strangest political realities on the planet. Taiwan is in a perpetual sort of political no-man’s land: It dare not declare independence from China, but it acts in practical, day-to-day terms as a separate entity that has become, beginning in this decade, a democracy.

‘A beacon of democracy’
This reality, however, cannot be acknowledged — although as Omestad pointed out, it can be referred to subtly: “… reflecting an unstated contrast with China, Bush commended the election as showing the island of 23 million people to be ‘a beacon of democracy to Asia and the world.’ “

For his part, Ma said he wanted to restore “mutual trust” with the U.S. and expand economic and tourism ties with Beijing. Restoring mutual trust means he will avoid the aggressive talk of independence aspirations that was Chen’s specialty. He will, however, brook no talk of unification with the mainland.

Simon Montlake wrote in the Christian Science Monitor, “Ma’s supporters say that his conciliatory approach to Beijing isn’t a sellout of Taiwanese sovereignty, as opponents have claimed, and won’t prevent Ma from criticizing China’s human-rights abuses such as the crackdown in Tibet. Speaking during a noisy victory celebration Saturday at his campaign headquarters, Ma told reporters that any future peace treaty between the two countries must remove Chinese missiles pointed at Taiwan, currently estimated at 1,000. He also repeated a campaign pledge to maintain defense spending above 3 percent of Taiwanese gross domestic product.”

Ma — unlike Chen, who is not fluent in English and has been a cipher to Americans — is an urbane man of international presence and background. He studied at New York University and Harvard Law School before rising in the Nationalist Party (KMT) and serving as Teipei’s mayor. His election, which followed his party’s wins in January parliamentary elections, had been predicted for several years; there were layers of reasons for people’s desire to turn away from Chen’s Democratic Progressive Party (DPP) despite its leadership role in breaking the KMT’s long (and undemocratic) hold on power.

A choice for practicality over ideology
Political scientist Liao Kun-jung observed in the Taipei Times, “In the past, the public made a ‘social choice’ to let the DPP rule the country to pull itself out of the KMT’s dominance, resulting in divided government for the first time. However, more than eight years of treading water politically, the DPP has been devoted to such ideological issues as removing the Chinese inscription on the gate to the National Taiwan Democracy Memorial Hall square and removing Chinese symbolism from Taiwan, while muddling important public policies on the economy, social security, education, natural resources and employment … .”

So what will Ma do? Several analysts note that he will certainly focus on those important internal issues as he works to increase interaction with Beijing. Philip Bowring predicts in the International Herald Tribune,
“Direct transport links, access for mainland tourists and fewer restrictions on two-way capital flows are now likely to go forward. Otherwise, Taipei’s relations with the mainland are unlikely to change fundamentally. The mainland’s economic appeal is strong, but it may have peaked, and recent events in Tibet have reinforced Taiwan’s determination not to become another ‘autonomous’ region.

“Ma’s mainland ancestry makes him suspect in the eyes of many islanders, and he will need to prove his own Taiwan identity by not being seen as soft on Beijing or covertly yearning for reunification.”

Bowring also noted that “Ma, who was born in Hong Kong and educated at Harvard, is more internationally minded than the Taiwan-centric Chen and should be able to see that Taiwan needs to do more than expand its dealings with China. Cross-strait links will help the island’s economy but they are no panacea. It is just as important to remove the barriers that prevent Taiwan from becoming a regional trading and service hub. While the island’s expertise in IT manufacturing is undoubted, other sectors of its economy have lagged, partly because of cross-straits tensions, but also due to petty restrictions aimed at protecting local commercial interests, bureaucratic power centers and long-redundant ‘security considerations.’ “

Despite both Taiwanese and international hopes for Ma’s success in keeping the delicate balance of relations with China, cautions abound. The Christian Science Monitor’s Montlake, after explaining the reasons for China’s relief at his election, wrote:

“But the road to détente with Beijing, a key plank of Ma’s program, is still lined with speed bumps. One unexpected hurdle may emerge from Ma’s own popularity, both in Taiwan and in Hong Kong and other parts of China, says Christopher McNally, a research fellow at the East-West Center in Hawaii. As Ma begins to reach out to China, and his international profile rises, hard-liners in Beijing may think twice about giving a platform to a photogenic leader whose legitimacy is based on a free vote.

” ‘It was easy to demonize Chen and portray Taiwan democracy as an aberration, something that wasn’t natural and didn’t function well,’ says Mr. McNally. By contrast, Ma may prompt more Chinese “to become aware of Taiwan as a working democracy with a well-spoken leader, and to ask why they can’t elect a leader like that?”

Still, as Bowring observed, “Chen’s vision was narrow. Ma now has four years to prove that he can exploit a window of opportunity to use closer cross-strait links to underpin, not undermine, Taiwan’s status.” Most observers predict he will do just that.