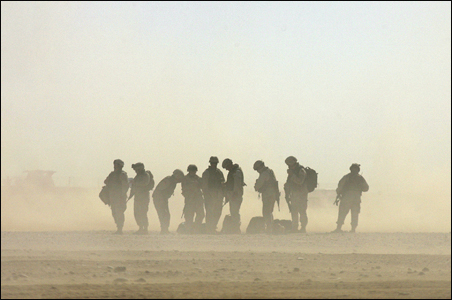 REUTERS/Jorge Silva
Troops wait for a helicopter in the desert in Tikrit, Iraq.

FARGO, N.D. — You see it in their eyes, hear it in their voices: The war in Iraq continues to be a deeply personal affair for soldiers of the North Dakota National Guard’s 141st Engineer Combat Battalion, who returned to the United States three years ago.

It’s still very personal because they brought part of the war back with them: a woman they call Mrs. M and her seven children, whose father was killed by Iraqi insurgents for helping the Americans.

However you may feel about the war, there is no denying the depth or sincerity of the bond established between these soldiers and the family of the man who welcomed their patrols into his home and tried to keep the soldiers safe by telling them where roadside bombs were planted.

His friendship and his children’s smiles reassured the soldiers, who wanted desperately to believe that they were right to be there, that their mission was a just and honorable one.

“We’re doing good in Iraq,” Sgt. 1st Class Shayne Beckert said, softly but with conviction, when he spoke recently at the blessing of a new home in West Fargo, N.D., built for the family by Habitat for Humanity and a small army of volunteers, including many of the soldiers and their commanders. “We care about the Iraqi people.”

Flanked by Gov. John Hoeven, a Republican, and Rep. Earl Pomeroy, D-N.D., Beckert choked up as he looked at the children ranging in front of him. He recalled that the 141st lost four soldiers in Iraq. There could have been more.

“This family here saved a lot of American lives,” he said. “If it hadn’t been for their father, there would have been more parents in North Dakota with hurt in their hearts.”

Majid Ali was his name.

In conversation and written reports, the soldiers had called him M, thinking that might protect him from reprisals. They warned him to be careful. He would smile and discount the danger to himself, saying it was nothing compared to the risks they faced on patrol near Tikrit in north-central Iraq during the worst days of the insurgency.

He asked only one thing: If something did happen to him, could they take care of his family?

M was killed in January 2005, pulled from his truck and shot as an 11-year-old son was made to watch. The boy reported that the men told him, “This is what happens when you help the Americans.”

Capt. Grant Wilz and Beckert went to console Fatima Ali, the woman they called Mrs. M, shortly before their deployment was to end. Terrified, she asked, “We go America?”

“We looked at each other,” Wilz recalled later. “Then we looked at her and said, ‘Yes.’ “

With Pomeroy’s help, the soldiers launched a determined assault on bureaucracies in Baghdad and Washington, and brought Mrs. M and her children to North Dakota. With Lutheran Social Services as sponsors, they helped arrange for housing, schools and other support. They mustered again to help build the house and, at the blessing ceremony late last month, present the keys to Fatima Ali.

“This is the house that Majid built,” said an emotional Pomeroy, who has taken criticism both for supporting the war and not supporting it enough.

The 141st was deployed to Iraq in early 2004 and assigned to clear roads of IEDs, improvised explosive devices. They happened upon Majid Ali while on patrol, and they soon were making regular stops at his home. “We’d set up security, provide them with some food and water,” Wilz said. “Some of the soldiers played soccer with the kids.”

Wilz said he thought about his three children when he watched M’s children at play with his soldiers. “I saw him as a father and a friend,” he said. “He liked us very much, and they were our family away from home.”

You hear such stories from Beckert and the other soldiers, too. This was how it was supposed to be, they thought. Every child’s smile told them they were doing good in Iraq. It was worth the risks, the separation from their own families, the hostility they encountered from other Iraqis.

When M was killed, Wilz told Mrs. M to take the children and move around the desert in case the insurgents targeted the family. They lobbied superiors to move the family into the secure Green Zone in Baghdad. Pomeroy worked with the State, Defense and Homeland Security departments to obtain a rare “significant public benefit parole,” allowing the family to come to the United States.

As they were about to leave Iraq, one of the children was struck by shrapnel from a car bomb in Baghdad. She later required surgery at a Twin Cities hospital.

The family was flown to New York. Wilz and Beckert met Mrs. M and the children there and accompanied them to Fargo, where a dozen other soldiers were waiting.

At the Fargo airport, one groggy Iraqi boy stepped off the plane, saw the familiar faces and waved. “Hi, guys,” he said. Specialist April Rohr – a medic who cared for Mrs. M when she was pregnant with her seventh child – cried as she held the baby for the first time. The baby’s name, Mrs. M told her, is April.

In the three years since, the children have adjusted to snow and cold. Mrs. M is working, cleaning houses. “The whole family is learning English, and the kids are doing well in school,” Pomeroy said.

Hoeven, who grilled hot dogs at a Bismarck fundraiser to help the family with settling-in expenses, joined in the West Fargo home dedication. “Today is a triumph of spirit,” the governor said, praising the family and his National Guard troops: “They are outstanding soldiers, the best soldiers in the world. They also have huge hearts.”

Zuher, 13, showed off his room to the governor and other visiting dignitaries. He had asked that it be painted green to match the uniforms of his favorite teams: the Iraqi national soccer team and the University of North Dakota hockey team.

Nour, 15, who said she “only knew how to say ‘Hi’ ” when she arrived in America, told of being on her school’s track team, liking math and science best and hoping to become a doctor.

Battalion’s bond is rooted — and safe