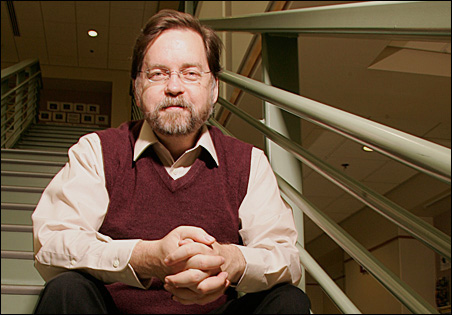 Photo by Allen Beaulieu
PZ Myers was barred from a screening of the movie “Expelled.” His reaction: “I’d be rolling around on the floor right now, if I weren’t so dang dignified.”

You’ve heard of carbon offsets, the scheme to compensate for greenhouse gases you cause to be released into the atmosphere.

How about stupidity offsets?

“Let’s say you’re going to do something that will increase the net amount of stupidity in the universe, like, say, paying to watch some inane creationist propaganda film because you’re curious about just how bad it can be,” PZ Myers wrote last week on his award-winning science blog, Pharyngula.

You can go without guilt, he went on, if “for every dollar you spend on the dumb movie you also invest an equivalent amount in something that increases intelligence.”

It was the latest broadside in America’s long-running battle over evolution. And Myers — a biology professor at University of Minnesota, Morris — is leading the forces for Charles Darwin’s landmark theory.  His weapons: a bitingly irreverent wit, an audacious blog and a driving passion for science.

On the other side are the creators of the film Myers impaled: “Expelled: No Intelligence Allowed.” It opens today in Minnesota and around the country.

Beginning with dark images of the Berlin Wall, the film attacks evolution linking it to the horrors of Nazi Germany, communism and fascism. Alternatively, it promotes intelligent design, the claim that there is evidence of some supernatural force in nature.

The film features Ben Stein, the former Nixon speechwriter turned actor, game-show host and conservative commentator. It has been cleverly peddled by Motive Marketing, which also promoted “The Passion of Christ” and “The Chronicles of Narnia.” And it has been lauded by conservative radio commentator Rush Limbaugh, the Discovery Institute and some Christian groups.

The film’s central point is to blast “Big Science” for persecuting champions of intelligent design and hounding them out of science labs and teaching posts. 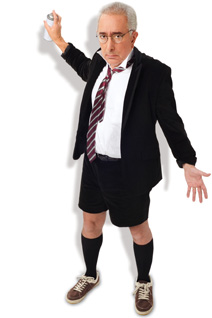 Myers is blasting back. He has taken on Stein and the Expelled promoters in a blogosphere battle that also has made the pages of the New York Times, and a raft of other papers around the world.

A small public university on Minnesota’s prairie is not the first place most people would look for the leader of this cause. Myers, 51, grew up in a working-class, Christian family in Kent, Wash., near Seattle. He was named Paul Zachary for his grandfather but goes by the initials PZ.

At the University of Oregon, where Myers got his Ph.D. in biology, he focused on questions of how organisms assemble themselves, especially in the formation of the nervous system.

Along the way, Myers also became an outspoken atheist.

Misfit in Morris?
Myers acknowledged that he is something of a curiosity in a Minnesota community of church-goers, many of them deeply committed social and political conservatives.

Still, Myers has created no big buzz in town, said the Rev. Tom Fangmeier, an Assemblies of God pastor who chairs the Stevens County Ministerial Board. One Lutheran pastor complained to the board about Myers, Fangmeier said, but “I haven’t heard about him in the cafes or anywhere else around town.”

Fangmeier holds “strong views about creation” as it is described in the book of Genesis, he said, and he disagrees wholeheartedly with Myers’ athiesm. But that’s as far as it goes.

Myers said debates over religion have no place in his classroom: “I’m teaching biology, so we keep that out of there.” But his students clearly think about it. A few have written “I love God” on their reviews of his course.

Creationism is fair game in the class. Myers debunks it. He stresses evolutionary development — called evo-devo in science circles — which explores the ancestral relationships between organisms and how their development evolved.

His blog is named after the pharyngula stage in embryonic development. It speaks to science with enough rigor to have been named the top science blog of 2006 by the prestigious journal Nature.

But don’t look to this blog for a professorial voice. Just the opposite. The blog — one of Minnesota’s most popular — is a cheeky and irreverent mix of commentary on politics, science and culture.

One recent entry, for example, lit into Minnesota Gov. Tim Pawlenty for vetoing funding for a new Bell Museum of Natural History: “This kind of dimbulb thinking annoys me beyond measure … over and over again we see an intentional deprivation of the most basic tools of a civilized society.”

Lately, though, the blog has been a polemic against “Expelled.”

The fight erupted last month after Myers tried to attend an advance screening of the film at the Mall of America in Bloomington. He was expelled. The film’s producer recognized him in line and sent security guards to oust him.

That set off a battle that has raged for weeks.

Says Myers
It took only minutes for Myers’ gleeful version of the incident to hit the blogosphere: “I’m blogging this from the Apple store in the Mall of America, because I’m too amused to want to wait until I get back to my hotel room.”

“I was standing in line, hadn’t even gotten to the point where I had to sign in and show ID, and a policeman pulled me out of line and told me I could not go in… . The officer also told me that if I tried to go in, I would be arrested,” Myers wrote.

“Deep, belly laugh funny,” he continued. “I’d be rolling around on the floor right now, if I weren’t so dang dignified.”

What tickled Myers was this: Richard Dawkins, the famous Oxford University biologist — author of “The God Delusion” and one of the world’s most prominent critics of intelligent design theory — had been with Myers in line. He got in.

“He is in the theater right now, watching their movie,” Myers blogged. “Tell me, are you laughing as hard as I am?”

Both Myers and Dawkins appear in the film. Myers said the producers had told him he was going on camera for a film called “Crossroads” which would examine the intersection of science and religion.

Only later, he said, did he learn it was an attack on scientists who reject the teaching of intelligent design.

The film’s assertion that evolution leads to Nazism is completely backwards from the truth, Myers said.

“Diversity is part of evolutionary biology, part of Darwin’s principle,” he said. “You have a population with various forms and selection works on variation. What Hitler and others did was try to reduce variation.”

Says ‘Expelled’ creators
Myers got caught trying to sneak into a private, invitation-only screening, the producers said in a teleconference with reporters.

Motive Marketing sent invitations to people in certain religious, education and science groups, providing an RSVP link, they said. Myers got access to the RSVP site and signed up.

They knew he was coming and decided in advance to expel him, said producer Logan Craft.

Associate producer Mark Mathis said he watched the line for Myers: “I see him … I go over to a security guard and say we don’t want him in the film… . We knew what PZ would do. He would go out and blog about it. He has spent months attacking the film.”

The producers denied that they had used false premises to entice Myers, Dawkins and others to be interviewed for the film.

Mathis said he told everyone in advance that the film would focus on a “cultural flashpoint” that has unleashed intense passion on both sides.

Stein insisted the film accurately portrays the scientists’ point of view: “They were never misquoted. So end of story.”

Stein defended the attack on evolution: “Darwinism is basically politics masquerading as science.”

“We are saying the Nazis themselves thought they were carrying out Darwinian ideas in the sense of eliminating inferior races, making mankind healthy and so forth,” Stein said.

Butts in the seats
On one point there is no dispute: Myers’ expulsion brought a lot of free publicity to Stein’s controversial film.

“I definitely think it’s going to put more butts in the seats,” Myers said. “There are people who are opposed to the message who now are curious.”