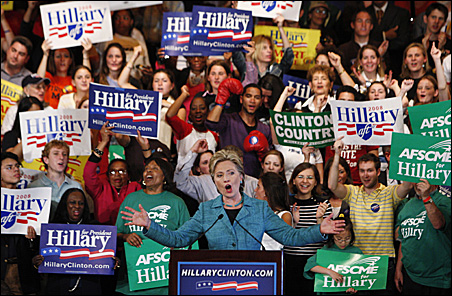 More than keeping her campaign alive with a solid victory in the Pennsylvania primary Tuesday, Sen. Hillary Rodham Clinton also shook the party and the pundits with her firm grip on the Democratic base of industrial states and working-class voters.

Added to Clinton’s recent win with the same crowd in Ohio, those voters give her standing to scare superdelegates with nightmares from the 1980s about Reagan Democrats and Michael Dukakis’ come-from-ahead loss.

Even after winning the Pennsylvania primary with 55 percent of the vote over 45 percent for Obama, Clinton still trails him in elected delegates, popular votes and cash. She has no chance of catching him in the primary elections with just nine races and six weeks to go.

Her only hope is that her claim in her Pennsylvania victory speech, “the tide is turning,” will resonate with superdelegates as they watch Obama’s popularity level off while the presumed Republican nominee Sen. John McCain of Arizona gains in the polls.

Clinton beat Obama by 58-42 percent among voters who decided in the last few days, the sixth primary in a row in which she won late-choosing voters, ABC News reported.

Clinton and church voters
Clinton’s campaign chairman, Terry McAuliffe, seemed to speak directly to superdelegates Tuesday night when he declared on CNN: “Don’t write her off. This was a big, important state … crucial to the electoral college victory.”

Translation: Clinton wins states the party must capture to take the White House next year.

President Bush’s unpopularity, opposition to the Iraq War and the lagging economy may drive those states to the Democrats no matter who wins that party’s nomination. But exit polls in Pennsylvania threw that assumption into question. For example, only half of the Democratic Catholic voters who attend church weekly said they would vote for Obama in a general election, The New York Times reported. One in four said they would vote for McCain.

In that light, Pennsylvania gave Clinton a new story to tell superdelegates who still are trying to decide which candidate to back, John Dickerson wrote in Slate.com:

“The only way Clinton can actually reverse the tide is if she can convince those superdelegates that the Pennsylvania victory proved that Barack Obama is fundamentally flawed,” he said. “This is more than an academic exercise. She needs to equip them with a set of arguments so strong that they can weather the violent uproar that will erupt in the base if superdelegates put her over the top.”

Now, Clinton has useful data to mine in the exit polls.

Despite winning a respectable share of blue-collar voters in Wisconsin and a few other states, “Obama just can’t get to them,” Dickerson said. “He’s tried everything: policy changes, bowling, drinking beer, and shelving all talk of arugula.”

Can’t close the deal
Clinton’s campaign is pushing the point further, raising questions of why Obama can’t “close the deal” with voters.

In the wake of the Pennsylvania vote, it’s a question Obama will need to address forcefully, the Associated Press said Wednesday morning.

“The loss, despite a massive cash infusion and robust campaign presence in the state, underscores the persistent problems he’s had winning over many of the voters who form the traditional Democratic Party base,” the AP said. “While the Illinois senator remains overwhelmingly popular among blacks, affluent voters and young people, other groups key to building the Democratic coalition remain elusive.”

Now, Clinton’s campaign claims that her win is pulling in cash she urgently needs to underscore the points she made in Pennsylvania with another victory in Indiana on May 6. Obama is expected to win the primary in North Carolina that same day. After that, key states for Clinton will be West Virginia on May 13 and Kentucky on May 20.

No matter what happens in those states, the decision almost surely will fall to superdelegates, almost 800 party officials and elected office holders who have an individual vote at the party’s convention in August. About one-third of them have yet to declare their choices and 70 of them are yet to be named.

Pity them. Their choices are, if anything, more muddled as the primaries roll on. If they heed signals sent from Pennsylvania and tilt toward Clinton, they buck the wishes of millions of the party faithful who placed Obama ahead of Clinton in the popular and elected delegate votes.

The reality is that they need both Clinton and Obama supporters to reach the goal of strengthening the Democratic majority in Congress while also winning back the White House.

The only thing Pennsylvania made clear for them is that Clinton will not erase their dilemma by bowing out.

“I might stumble and I might get knocked down but as long as you’ll stand with me I will always get back up,” she vowed in her victory speech.

More than toughness keeps her going as she and Obama bloody each other in state after state.

Lessons from Minnesota
She also is following a strategy that David Carr of The New York Times explained by drawing on a classic tale from Minnesota politics.

“In 1990, I was covering politics in Minnesota and Paul Wellstone was down double digits in the polls in the waning weeks of the Senate race,” Carr wrote. “I watched in amazement as Mr. Wellstone’s campaign staff continued to fight tooth and nail for every vote, something I wrote off to a civic reflex that I didn’t possess.”

Wellstone’s camp explained that there was more than just blind loyalty at work. They would keep going in hopes something would break in the media — the equivalent of a lightning storm “and then head out to the golf course and wave a 9-iron around.”

The week before the election, supporters of Rudy Boschwitz, then the incumbent, sent out a letter asserting that while both candidates were Jewish, Mr. Wellstone “has no connection with the Jewish community” and his “children were brought up as non-Jews.”