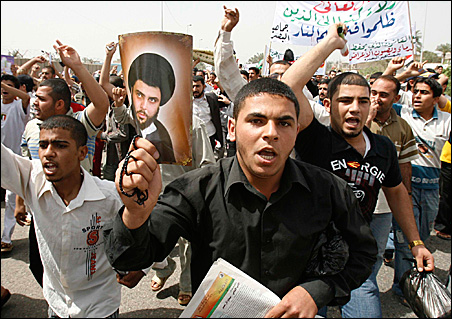 REUTERS/Atef Hassan
Supporters of Shi’ite cleric Moqtada al-Sadr took to the streets of Basra on April 4 to protest the arrest of Mehdi army fighters by Iraqi and U.S. forces.

Stretch your mind across the years to encompass all of the news you’ve seen and read of violence committed in the name of religion.

Your mind would visit the Middle East, of course, and New York on Sept. 11, 2001. It very likely would stop also in Northern Ireland, Indonesia, India, several places in Africa, Spain, London, Tokyo, Oklahoma City and other blood-stained sites in America. The list goes on and on. 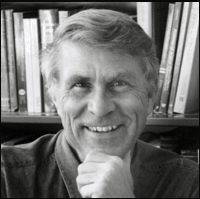 Here’s the sad sum of it: religious violence has become a routine subject in the daily news of the post-Cold War era, as banal as breakfast cereal.

Even so, it shocks and perplexes us, partly because so many millions of people from so many different faiths were taught that religion calls us to love one another.

How can it also trigger violence?

Mark Juergensmeyer turns the question around.

Eruptions of violence we are seeing today did not start with faith that spurred deadly political action, he argues. Instead, the reverse is true. Religion was tossed into already simmering political stews to legitimize violence and attract warriors who otherwise could not live with the blood on their hands.

Juergensmeyer is bringing his respected thoughts on the puzzle of religion and violence to Minnesota this week. He is to speak at the University of Minnesota’s Humphrey Institute at 4 p.m. Wednesday (April 9).  The lecture is free and open to the public.

Juergensmeyer’s book, “Terror in the Mind of God: The Global Rise of Religious Violence,” is based on his interviews with violent religious activists in the United States, Northern Ireland, the Middle East, India and Japan, where Aum Shinrikyo activists released nerve gas in the Tokyo subway system.

Cosmic war
He found common elements in the dark alliance between religion and violence.

First, religious terrorism typically is mind-numbing, mesmerizing theater, not true military action. It is “performance violence,” intended to illustrate a grander conquest beyond the immediate target.

When Osama bin Laden issued a fatwa proclaiming that the world is at war and when abortion clinic bomber Eric Robert Rudolph called himself a soldier at war, they were relating to “metaphysical conflicts between good and evil,” Juergensmeyer said in his book.

“What makes religious violence particularly savage and relentless is that its perpetrators have placed such religious images of divine struggle — cosmic war — in the service of worldly political battles,” he said.

Once cast as a “cosmic war,” a conflict conveys a sense of importance and destiny to those who find the modern world to be stifling, chaotic and dangerously out of control.

Like bin Laden, many terrorist leaders have been privileged and wealthy. But they have used religion to attract followers from the margins of life. Often poor and without prospects, the warriors for faith were frustrated and frightened over a world that seemed to passed them by.

Some, such as the 19 Muslim men who carried out the suicide assault on the World Trade Center and the Pentagon in 2001, were alienated from their native lands but out of place in the countries where they had moved.

The root of the anger may have been secular — such as Palestinians’ claims their land was taken. But define the struggle in religious terms, and the support base expands while violence is justified or even required. The suicide bomber who straps on plastic explosives and blows up a shopping mall becomes a martyr, not a crazed killer.

In short, Juergensmeyer argues that religion is a tool that can be used by violent activists who are driven by political or personal reasons. With bin Laden, some say it is megalomania.

“I don’t think that these are battles over religion in a narrow sense, not over your belief or trying to force somebody to accept your belief,” Juergensmeyer said in a telephone interview from Santa Barbara where he directs global and international studies at the University of California.

Instead, he said, “religion provides an expression of revolt and appears to provide a kind of solution,” for those who are frustrated or twisted enough to kill and destroy.

Provocative religious symbols
Still, Juergensmeyer, who calls himself religious, does not let religion entirely off the hook.

Religion provides precisely the symbols and imagery that are needed in the script for cosmic war. Worshippers who sit in Midwestern churches singing “Onward, Christian Soldiers” rarely expect to take up arms. They understand the hymn in metaphorical terms.

But, think about it. Scripture and religious rituals across many faiths abound in symbols of war, violence and martyrdom. Christ, of course, was a martyr, as was the founder of the Shi’a Muslim tradition, Husain, Juergensmeyer wrote.

Martyrdom links to sacrifice, which transforms killing — an animal or, even, a human — into something positive. Much as it is sanitized on Sunday mornings, the act of eating the body of Christ and drinking his blood celebrates a sacrifice that came under violent circumstances.

Ancient rituals honoring gory sacrifice are not limited to Christians.

“In the Hebrew Bible, which is sacred to Jews, Christians, and Muslims, the book of Leviticus gives a detailed guide for preparing animals for sacrificial slaughter,” Juergensmeyer wrote in his book. “The very architecture of ancient Israeli temples reflected the centrality of the sacrificial event.”

Further, faith is sanctified as a palpable presence on the battlefield.

A few hours before the invasion of Iraq in 2003, U.S. Marines knelt in a tent chapel on the Kuwaiti desert where a Catholic priest opened his Bible to read the story of Abraham offering God the sacrifice of his son Isaac.

The Marines’ rifles and machine guns were propped next to their folding chairs as they sang with gusto, “Shepherd me, Oh Lord, beyond my wants, beyond my fears from death unto life . . . . I will go, Lord, if you lead me.”

Later, the same Marines opened fire on Iraqis who were equally devout and equally committed to sacrifice in the name of faith.

It was not unusual to see a wounded Iraqi prisoner pray under the barrel of an M-16 rifle and later see the Marine who held the rifle say his own prayers.

The enemy as devil
Most of us respect and even honor the battlefield reach for solace in religion.

Still, the Iraq War and the broader war against terrorism have ignited intense debates over how the enemy is defined. Religion plays controversially into the arguments as violence in its name increases.

“In 1980, the U.S. State Dept. roster of international terrorist groups listed scarcely a single religious organization. . . . At the end of the twentieth century, over half were religious,” Juergensmeyer wrote.

Could the official increase be explained by the fact that the government is more alert to religious groups? Juergensmeyer doesn’t think so.

“Religion has become the ideology of protest in a variety of settings,” he said in the interview. “It is related to forces of globalization and the weakening of the nation state.”

Those developments have created voids around the world in terms of identity and moral authority, he said, and “religion provides both.”

A key question now is how the broader population responds to bloody attacks in the name of religion. Muslims in the United States, Britain and other countries are rightly concerned that they will be targeted in the backlash. Christians and Jews also feel they are hated, especially in the Arab world.

A psychological key to a cosmic war is to identify or invent an enemy. Most effective is the enemy who can be dehumanized into some amorphous and collective devil.

“In the eyes of those who planned the Hamas bombings in the buses of Jerusalem and Tel Aviv, the schoolchildren on their way to class and the housewives on their way to the shopping mall were not innocent: they were representatives of a collectivity — Israeli society — that was corporately the foe,” Juergensmeyer wrote. “An Israeli on the other side of the struggle confirmed that he regarded innocent Arabs as the enemy as well.”

In the face of such collective hatred, some Christian theologians have called for a new reformation – among other reasons, to erase religious justification for hatred. Scriptural passages have created “a world where adherents of one religion feel compelled to kill adherents of another,” John Shelby Spong, a controversial Episcopalian bishop, said in a website adaptation from his book “The Sins of Scripture: Exposing the Bible’s Texts of Hate to Discover the God of Love.”

Juergensmeyer agrees that worshippers who participate in the nonviolent stages of demonizing an “enemy” must take some responsibility for the acts of the few who actually blow people up.

“Where does a terrorist culture or a culture of violence begin and end?” he asked in the interview. “Where do you make the distinction between those who carry out the act and those who support it? Organizations like Aal-Qaida would vanish overnight if they didn’t feel there was a sea of supporters. That is true of a lot of organizations.”

An epidemic of bloodshed in the name of religion has prompted deep soul-searching in Minnesota.

Hundreds of people representing the world's major religions have gathered recently in Twin Cities area mosques, churches and synagogues to examine their own traditions and learn from one another about misunderstandings that give rise to violence.

"We took seriously the willingness to be self-critical," said the Rev. Tom Duke, former executive director of the St. Paul Area Council of Churches and now a voluntary convener for the interfaith dialogs.

The local meetings have been organized by a variety of groups. Some plugged into a national conference organized in January through the Trinity Institute in New York. Webcasts of the Interfaith Dialog on Religion and Violence are available online.

No one, of course, has a simple solution to the global crisis.

"That's very complicated," Duke said. "It's easy sometimes to attribute violence to extremists or to identify it as the outgrowth of deprivation or injustice. But that doesn't always hold true. . . Often it is a matter of exploitation by the powerful."

On the other hand, he said, extremist factions probably prevent the more peaceful majorities from interacting.

"In the Palestinian-Israeli conflict, the violence in the extreme elements seems to prevent the more modest or centrist elements from prevailing and coming up with more peaceful solutions — although that did happen in Northern Ireland," he said.

On the local front, many participants worried about stereotyping that leads to hate, especially targeted at Muslims living in the post-9/11 climate. Friction erupted in Minnesota last year after some Muslims refused to handle pork in their cashier jobs or drive taxis with passengers carrying alcohol.

"Thankfully, that has not been violent, although some interpret it that way," Duke said.