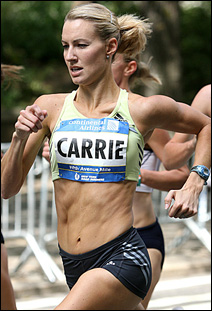 It was Gilda Radner’s Roseanne Roseannadanna who, many years ago on “Saturday Night Live,” regularly and philosophically said, “If it’s not one thing, it’s another.”

Enter Carrie Tollefson — perhaps Minnesota’s greatest-ever middle-distance female runner and a 2004 Olympian. Tollefson, the high school champ from Dawson and then the NCAA champ at Villanova, was too young then to watch “SNL.”

And, now, it’s another thing.

Saturday race scratched because of bronchitis
Tollefson was set to race hard Saturday in the 1,500 meters at the Drake Relays in Des Moines and solidify her march to the U.S. Olympic Trials. She still isn’t sure if her focus at the trials will be the 1,500, her event in Athens four years ago, or the 5,000 meters.

But this week, acute bronchitis forced her to drop out at Drake, the marquee Midwest season-opening meet that launched her toward the Olympics in ’04. This breathing problem follows the revelation recently that she is suffering from anemia.

And then there are the two fender benders she’s been involved in since November, leaving her 2002 Ford Escape dented all over.

“I don’t want to sound like Debbie Downer,” Tollefson told MinnPost the other day. “But …”

And — in a previous life at the vaunted Star Tribune — we chronicled Tollefson’s bumpy but exhilarating road to Athens in 2004, fighting pain, qualifying times and European travel to get to Greece.

Olympic trials only two months away
Now, a bit more than two months before the Olympic trials in late June in Eugene, Ore., Tollefson has yet to run a quality race … last year or this year.  She finished last in a 1,500-meter race in February. She ran a disappointing 8K in New York in March. That’s why Saturday’s 1,500-meter invitational at Drake was key.

“I wanted to go and have a good race and feel good,” Tollefson said. “It was very important for me the last Olympic year.” She won at Drake. It created her roll to those Olympic trials, despite injuries. “I was hoping I could mimic 2004. That’s almost an athlete’s worst nightmare when you try to mimic the past. If it doesn’t work, you go, ‘What’s wrong?’ “

So, she hopes to be recovered from the bronchial issue in time for the Stanford Cardinal Invitational on May 4. She’ll know soon if her health will allow that.

“People don’t understand how hard it is to make our Olympic team,” she said. “You have one day every four years. You have a cold or an allergy or a strained lower back, that could be it.”

It leads to this critical question: Is Tollefson — she of the multiple high school, college and national championships — running out of time to be ready to make her second Olympic team?

First, because she won the 1,500-meter race at the 2004 trials, she has a bye into this year’s trials. That gives her some comfort. Second, that means she can concentrate on the 5,000-meter event, in hopes of gaining the qualifying time.

“There’s enough time for me,” she said. “I’ve put in so much work. I rise to the occasion. When the Olympic team is on the line, I’m going to be there.”

She had vowed that this Olympic year she didn’t again want to be “The Comeback Kid.”

But, alas, Carrie Tollefson is.