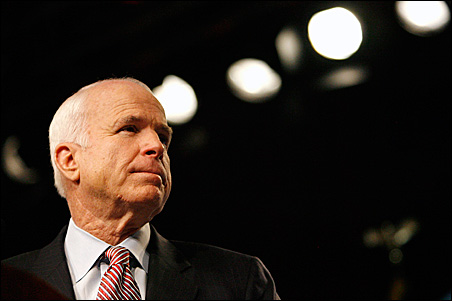 Little Richard, at age 75, rocked the recent Grammy Awards. Thousands of leading-edge baby boomers turning 62 this year say they plan to work into their 70s. And the Beatles’ Paul McCartney is 65, not much younger than John McCain at 71.

Many older folks would like to believe it. But an NBC-Wall Street Journal poll released last week tells us four in 10 adult Americans aren’t buying in. While 72 percent of potential voters in the poll said Americans are ready to elect an African-American and 71 percent ready for a woman as U.S. president, a smaller number — 61 percent — said fellow voters are ready to elect a candidate older than 70.

Still, the poll shows John McCain running virtually neck-and-neck with whichever candidate wins the Democratic nomination. He barely leads when paired with Hillary Clinton (46 to 44 percent) and barely lags when paired with Barack Obama (42 to 44 percent). (Both results are within the poll’s margin of error.) The question of whether Americans will elect a septuagenarian as our next president appears very much alive.

If he wins in November, McCain — by then age 72 — would become the oldest person elected to the job in U.S. history. That gives late-night talk-show hosts grist for plenty of quips. From David Letterman’s running string of “Old Man McCain” jokes: “John McCain looks like a guy who picks up the TV remote when the phone rings.”(No youngster himself, the graying Letterman will turn 60 next month.) And comments targeting McCain’s age run rampant in the blogosphere, where this appeared on an opinion board at the Huffington Post: “I just wonder at his age if he’d even hear the phone at 3 a.m.”

Ageism isn’t dead yet. But it seems fair to ask a few questions about how much age really matters in choosing a president. What practical matters should voters consider when voting for a person in his 70s to run our country? What has history taught us along that line? And how much will we let the three “isms” in the race — ageism, sexism and racism — influence Americans’ choice of a president in this race?

‘Old ideas’
McCain’s age will be a major variable in this presidential race, said Kevin Sauter, a professor at the University of St. Thomas who specializes in political communication. But it’s likely to surface only by implication. His Democratic opponent isn’t going to say McCain’s too old to be president, he said. “Instead, we’ll see comments from the Democrats that he has ‘old ideas.’ In a way, he has a one-note campaign that echoes back to he’s a veteran and he’s been through the (Vietnam) war. And that already pushes him back 45 years.” Sauter wonders whether the Republican candidate will continue to push that notion.

While he thinks McCain looks good for his age, at times he appears weary, Sauter said. His opponent in the general election likely will seize on that as a campaign tactic, too. “I bet we’ll see some images in Democratic camp ads that will portray him as looking very old and tired.”

If McCain runs against Obama, the younger candidate will use his energy and vigor to his advantage, Sauter said. “You see it with the way Obama jumps up on the stage. He represents youth, and he’s going to try and play that.” The professor isn’t sure whether Clinton can play a youthful card, he said, but if she’s her party’s candidate, a gender card could surface as well. “It will be important for John McCain to try to get people not to think about his age,” he said.

He expects the sexism, racism and ageism to be silent among the candidates, but he hears them from potential voters, sometimes very subtly. “I heard a guy in Florida on the radio say, ‘We just couldn’t vote for a black man down here.’ And I heard somebody say, ‘We just can’t vote for Hillary.’ I think those sorts of comments are born of ‘isms.’ “

‘Isms’ may be fading
In line with the NBC-Wall Street Journal poll, Dr. Steve Miles sees those “isms” fading in America. A Twin Cities geriatrician who ran for a seat in the U.S. Senate in 2000, Miles believes the vision of “Obama as the face of America” is truly what America has become. “Even the pundits on CNN have moved to a post-racial position. They really don’t care,” he said.

“The kids get it,” he added, referring to some who are old enough to vote. “And one could make the argument it’s a post-feminist election. Hillary is just making a flat-out claim that’s she’s capable. Each of the candidates is a face of the fact there are no minorities.”

That includes McCain, the white-haired candidate. Any voter’s rejection of McCain merely because he’s almost 72 is “ageist on the face of it,” Miles said. But he considers McCain’s history of melanoma, a potentially fatal skin cancer, a reason for concern. Miles is among those who insist a comprehensive report of the candidate’s medical records should be made available to the public. While officials in McCain’s campaign have said three times they would provide such a report to the New York Times, the newspaper has not yet received it, according to a story in the Times in March.

It’s a fact that incidence of Alzheimer’s and some other diseases increases after age 65, Miles said. And despite a constitutional amendment ratified in 1967 to ensure public disclosure of a U.S. president’s medical tests, results of Ronald Reagan’s cognitive tests were not released during his tenure in office. Along with that, there is nothing in place to force a president’s Cabinet to act when medical results of concern are reported, he said. Before Reagan’s second term in office ended, he had undergone colon and prostate surgery and showed signs of forgetfulness that later led to a diagnosis of Alzheimer’s disease.

McCain’s relatively youthful appearance for his age is a plus, said Steve Schier, a Carleton College political science professor. With a younger wife at his side, McCain plays the aging card well. “He and his son hiked the Grand Canyon last year,” he said. “His mother’s 95, and she’s out there campaigning with him.”

As a 68-year-old candidate, Ronald Reagan looked good, too, Schier said. His medical records looked good. And George H.W. Bush appeared to be a vice presidential candidate who could take over. “Those are the things McCain has to satisfy in coming months,” he said. But Schier believes growing longevity and vitality have changed the way many people evaluate “old.” “People look at a 71-year-old very differently than they did even 20 years ago.”

He hears little talk about McCain among his young students at Carleton College, who tend to favor Obama, he said. “They view Hillary and McCain as being on one side of the political divide” — the old school or the establishment, he said.

An upsurge in youth engagement
If large numbers of young voters show up at the polls in November, they could bring surprises, said Harry “Rick” Moody, director of AARP’s Office of Academic Affairs. Older people tend to be over-represented in polls, and voting tends to increase as people age. He predicts young people may be voting in greater numbers this year. “There’s been an enormous upsurge in young people’s engagement,” he said. “And there’s an age division in this election. Young people are for Obama.”

Moody is among those who believe McCain should choose a vice-presidential candidate who brings youthfulness to his ticket in a way he cannot. “I don’t think I’m guilty of ageism when I say the odds of dying and getting Alzheimer’s increase every year,” he said. “The question is, to what extent should a voter take account of that when looking at a presidential candidate?” On the flip side, he cites the legacy of respected elder statesmen and women. “Conrad Adenauer was in office until he was 86. Golda Meir is another example.”

But he expects an “old” factor will influence the way many people vote this year in a way unrelated to any candidate’s age. A promise of change that has fueled excitement about the election has become a driving force, he said. He considers it linked to a mindset rooted in the founding of America. “Take a look at the back of a $1 bill to find the words ‘novus ordo seclorum,’ ” he suggests. “It’s Latin for ‘the new order of the ages’ ” and reflects the same message as the “new and improved” label on a box of breakfast cereal.

“There’s a definite prejudice not against the elderly but against the past,” he said. “It’s the idea that we can do it over.”