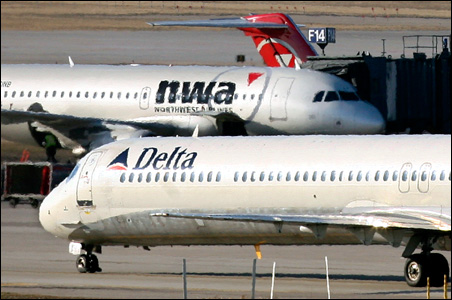 REUTERS/Eric Miller
A Delta Air Lines jet taxis past a Northwest Airlines jet parked at a gate at the Minneapolis-St.Paul International Airport Monday. The pending Delta-Northwest merger would create the world’s biggest airline.

The boards of Delta and Northwest agreed Monday to join forces to become the world’s largest airline. The new carrier will be called Delta and be headquartered in Atlanta, though it will retain some executive positions in the Twin Cities. “This merger will deliver unprecedented benefits to all stakeholders in the communities we serve,” said Delta CEO Richard Anderson, who will lead the company after the merger, which is still pending approval from federal anti-trust regulators. Here’s a look at how the changes could affect everyone from passengers to shareholders:

PASSENGERS
Whether the merger makes flying from the Twin Cities more or less convenient might depend on your destination. Airlines consultant Ernest Arvai predicted Monday afternoon that some domestic flights would be canceled or changed following a merger. Unprofitable or less profitable routes would be abandoned and left for regional carriers to pick up. On the other hand, international travelers might benefit from Delta’s expansive range of trans-Atlantic flights, he said.

“You’ve got a tremendous number of options for passengers from a convenience standpoint, and similar for Delta passengers going to the Far East through Northwest’s route structure in Asia,” Arvai said.

The airlines made the same claim in their announcement Monday night. Customers will be able to fly to more destinations with more scheduling options, according to airlines officials. That’s probably an overstatement, though, said Myles Shaver, a University of Minnesota Carlson School of Management professor who specializes in mergers and acquisitions. “I’m not a big believer in all the benefits that they say are going to accrue,” Shaver said. Delta and Northwest already give their customers easy access to each other’s flights through their partnership in the SkyTeam Alliance.

When it comes to customer service, the, er, good news might be that both airlines are already at the bottom of the pack with little room to decline further. Twin Cities travelers are familiar with our hometown carrier being dogged by its “Northworst” nickname. Delta was once considered a leader in customer service, but that reputation nosedived over the last couple of decades, Arvai said. In fact, when Delta introduced Song, its low-fare carrier, in 2003 some reviewers noted the service was better than on Delta’s main carrier.

“Combining the two together, I’m not sure you’ve got much of a change,” Arvai said. One customer service variable is how labor would respond to the merger.

EMPLOYEES
Much attention has been paid to negotiations with the two pilots’ unions involved in the merger. The greatest job loss, however, is likely to come among white-collar workers.

“The headquarters out of Eagan could be minus quite a few employees after the transition period,” Arvai said.

Until a merger plan is released, it’s not known whether that transition period will last two years or two weeks, but in the end, Arvai expects significant reductions in Minnesota. Once the airlines’ websites and technology were integrated, the carrier would have no incentive to retain two IT departments, so those workers would also be at risk. Delta and Northwest both use the same booking platform, which should ease the technology transfer.

Seniority is the big issue with the pilots’ unions. Each airline’s union has a ranked seniority list that determines, among other things, which pilot sits in the left seat. The lower-ranked pilot on each flight is paid less and gets stuck riding shotgun. An early retirement plan offered at Delta a couple of years ago allowed many younger pilots to move up the seniority list more quickly than they would have at Northwest.

“A lot of the Northwest guys in the right seat would probably qualify, experience-wise, for the left seat at Delta, forcing those guys back into a lower pay scale,” Arvai said. “That’s a difficult one, and that’s where management almost threw up their hands and said unions, you guys take care of that.”

Mechanic and flight attendant unions have not been as vocal during the merger talks. Neither appears to have the complicated seniority questions hanging up the pilots’ unions, Arvai said. The flight attendants seem to recognize the dire situation of the industry and be willing to make some concessions if needed. Mechanics are probably safe in their jobs for the foreseeable future because Delta and Northwest own different fleet types and a merged carrier would still need mechanics for each type of plane. Arvai said the new company would desperately want to consolidate the variety of planes it operates, though. Besides mechanics, it’s also expensive to stock spare parts and maintenance equipment.

“The problem you have is that neither of these carriers is in a position to buy new aircraft,” Arvai said.

SHAREHOLDERS
Delta and Northwest shareholders have “taken it in the shorts” over the past year, Arvai said. When Northwest emerged from bankruptcy last summer its shares started trading for around $25, while at the same time Delta’s were going for around $19. At the end of the day Monday both were hovering around $11 a share.

Under the merger terms, Northwest shareholders will get a small premium for their shares. For each Northwest share they’ll receive 1.25 shares of the new combined carrier’s stock. Whether that new stock will be worth hanging onto is another question. Shaver said a merger won’t solve some of the underlining problems hurting the airlines industry right now, namely rising fuel costs and a slumping economy.

MINNEAPOLIS-ST. PAUL INTERNATIONAL AIRPORT
Airlines officials said in their announcement Monday there will be no reduction in the number of hubs. Northwest has hubs in the Twin Cities, Detroit and Memphis. Delta’s hubs include Atlanta, Cincinnati and Salt Lake City. But Arvai, who wrote an economics study of Northwest Airlines for the state in 1991, speculated the merger will set up long-term competition.

“Three hubs in the Upper Midwest aren’t sustainable,” Arvai said. “I think the Twin Cities are a strong enough business market that certainly a lot of flights will be there. The question is the connecting flights. I think in the short term it’ll remain a fairly viable hub. In the longer term, it depends on how traffic flows work.”

Metropolitan Airports Commission spokesman Patrick Hogan said they considered Minneapolis-St. Paul International one of the major assets Northwest brought to the table in the merger talks. It’s the commission’s expectation that the airport will remain a central hub for the new airline, he said.

Detroit and Cincinnati’s close proximity to one another make it more likely one of those hubs would be eliminated first, Shaver said. A more important factor is that Twin Cities travelers pay high airfares.

LOCAL ECONOMY
The new airline will be headquartered in Atlanta, but it intends to keep “executive offices” in the Twin Cities and is “committed to retaining significant jobs, operations and facilities in Minnesota,” according to its announcement. Still, job cuts are anticipated by some as the merger progresses.

“Losing a bunch of high-paying jobs in Eagan certainly isn’t going to help the local economy. I think it’ll take some time for that transition to occur, but you’ll see a number of positions leaving,” Arvai said.

Kirsten Morell, spokeswoman for the Minnesota Department of Employment and Economic Development, said officials there were waiting for details on Monday afternoon, but were most concerned about the approximately 1,000 jobs at Northwest headquarters in Eagan. Another roughly 1,300 employees work at a Northwest data center and training facility, also in Eagan, and Morell said state officials are optimistic job opportunities at those workplaces could grow if the merger is successful.

She pointed to the 1998 banking merger between Norwest and Wells Fargo, which resulted in the loss of a corporate headquarters but has since spawned a growth in local jobs. Shaver noted another analogy, looking at the Northwest-Republic merger. Detroit lost a headquarters in that merger, but still has lots of Northwest jobs.

The airports commission believes it has some pull for protecting as many jobs as possible in Minnesota. Northwest Airlines still owes the state $245 million from a 1992 financing agreement, Hogan said. The loan isn’t due until 2022, unless the airline stops maintaining a hub and headquarters in Minnesota, in which case the money is due immediately.

“We do believe it provides some financial leverage for trying to protect jobs and air service,” Hogan said.

Dan Haugen is a Minneapolis-based freelance writer. He can be reached at dan [at] danhaugen [dot] com.

The Daily Glean: A merger of unequals

In Tuesday’s local news roundup, we straddle the nation to bring you Delta-Northwest: Glean Edition. Also, just in time for Tax Day: how much slumping home values slam local tax bases. And why gas stations don’t much care if you buy gas.

Here are comments made at a news conference by Rep. Jim Oberstar, D-Minn., on how the proposed Delta-NWA merger could affect Minnesota. (Click on the icon below)

Delta-NWA merger: What it means for you, our economy and the airlines