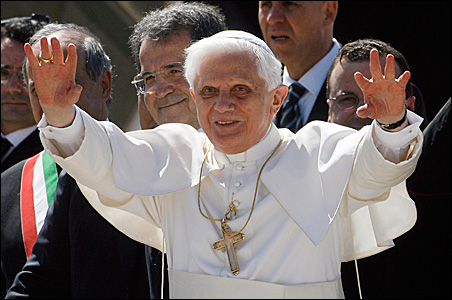 When Pope Benedict XVI lands at Andrews Air Force Base today, he will be welcomed by a nation that is teeming with religious intensity surpassing anything he could hope to find in Europe.

But this pope already has taken bold strides into broader issues that are roiling America in its pews and in its streets. Catholics and non-Catholics alike will be listening for his message on the Iraq war, the environment and the moral state of the nation.

‘Lift up your heads’
In what seemed a rebuke to the United States’ insistence on planting democracy in Iraq, he said the Iraqi people “for five years have endured the consequences of a war that has provoked upheaval in its civil and social life.” Speaking directly to the Iraqis, he exorted them to “lift up your heads and let it be you yourselves who, in the first place, rebuild your national life!”

The pope’s main reason for visiting the United States is to speak before the United Nations on Friday, said the National Catholic Register.

“Expect him to continue a theme that has developed since before he became Pope: War cannot solve problems,” the Register said. “The truth of that proposition isn’t clear to Americans, who experienced World War II as victors who then got to go home. But in a German TV interview, Benedict explained what he means: ‘War is the worst solution for all sides. It brings no good to anyone, not even to the apparent victors.’ “

Still, pundits don’t expect to see the pope launch a direct broadside against President Bush’s foreign policy or to comment on the U.S. election, said the Associated Press.

Common ground
Indeed, Bush and the pope share common ground — opposing abortion, gay marriage and the destruction of embryos. And Bush is pulling out all of the stops to welcome the pope for a ceremonial visit to the White House.

”One, he speaks for millions. Two, he doesn’t come as a politician; he comes as a man of faith,” Bush told the EWTN Global Catholic Network in an interview aired Friday and reported by the Associated Press.

Bush added that he wanted to honor Benedict’s conviction that ”there’s right and wrong in life, that moral relativism has a danger of undermining the capacity to have more hopeful and free societies.”

They also share an appreciation for the vibrancy of religion in America. Although the Catholic Church has been shaken by clergy sex abuse, it remains the nation’s largest denomination with more than 64 million members, the Associated Press reported. A recent survey by the Pew Forum on Religion and Public Life found that many U.S.-born Catholics are leaving the church, but Hispanic immigrants have made up for some of the loss.

The pope’s itinerary also calls for him to address leaders in Roman Catholic higher education, pray at Ground Zero and hold Masses in the new Nationals Park in Washington and Yankee Stadium in New York. His 81st birthday is Wednesday, and a party is planned in Washington.

The environment
At the United Nations, the pope also is expected to deliver a powerful warning over climate change in a move to adopt protection of the environment as a moral cause for Catholics, The Independent of London reported.

Benedict has earned the title “green pope” for his emphasis on a duty to “protect creation” and safeguard the poorest on the planet from the effects of global warming.

“Before it is too late, it is necessary to make courageous decisions that reflect knowing how to re-create a strong alliance between man and the earth,” he told a youth audience in September.

Vatican City recently became the world’s first carbon-neutral state, offsetting its carbon footprint by planting a forest in Hungary and installing solar panels on the roof of St. Peter’s Basilica in Rome.

“For the Pope to take his climate-change message to the high-profile UN platform will be considered hugely influential to the fifth of the world’s population who are Catholics, and will act as a rallying call for action in Africa and Asia,” the Independent said.

Clergy sex abuse
Some Catholics are disappointed that the pope isn’t visiting the Archdiocese of Boston, where the clergy sex-abuse crisis erupted in 2002 and then spread nationwide, the AP said.

However, Cardinal Tarcisio Bertone — the Vatican secretary of state — told the AP that Benedict will address the scandal during his trip and “will try to open the path of healing and reconciliation.” A likely forum could be when Benedict speaks to priests during a Saturday morning Mass at St. Patrick’s Cathedral in New York.

Diverse voices
By several measures, the United States is one of the most devout nations in the developed world. But the faithful often disagree vehemently. And, whether or not he sees it, the full flavor of that diversity will greet the pope. Groups advocating a stronger role for women, gay marriage and peace are prepared to demonstrate along the papal route.

Some Catholics also will urge the pope to remonstrate against mass consumerism, rampant free enterprise, and the neoconservative agenda for global democratic revolution, said the feisty American Conservative magazine.

They may not be disappointed. The Conservative predicted the pope will speak to such issues, reflecting themes of a forthcoming social encyclical, which is expected to be published on May 1.

“The document may touch on subjects that make many conservatives blush,” the Conservative said.