Among the 130-odd films screening over the next two weeks as part of the 26th annual Minneapolis-St. Paul International Film Festival is “Young @ Heart,” a crowd-pleasing documentary about a senior-citizen choir whose members belt out hipster tunes by the likes of Talking Heads and Sonic Youth. 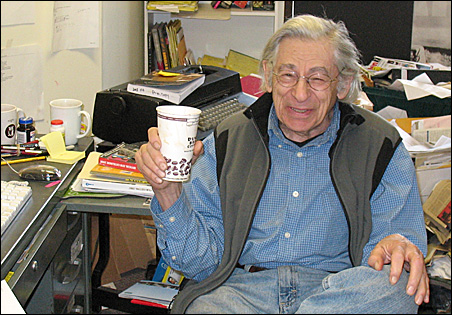 MinnPost photo by Rob Nelson
Al Milgrom in his office.

Fully aware of the risks involved, I can’t resist asking mercurial Al Milgrom — 80-something director of the festival colloquially known as the M-SPIFF — whether “Young at Heart” (screening Saturday) could be reasonably regarded by festivalgoers as “The Al Milgrom Story.”

“Oh, I don’t know,” says Milgrom, who has likely forgotten more alleged M-SPIFF allegories in his quarter-century of running the fest than any number of civilian cinéastes could ever remember.

“Are you asking whether ‘Young @ Heart’ is a metaphor for me?” he says with a shrug. “It’s too hard for me to apply my daily frustrations and resentments to a positive movie about opening your old throat and singing, ‘Oh, what a beautiful morning/Everything’s going my way.’ I mean, I would love to be in a senior chorus crooning a few songs for fun instead of having to deal with this mundane stuff.”

“Well, right now I’ve got to run off and finish two big ads,” he says with roughly 48 hours to go before showtime on Opening Night. “We’ve got to worry about posters for the Somali-American community. We’ve got to get fliers to the thousand kids taking German at the U [of M]. I’ve got to worry about passing out fliers at the lecture that someone is giving on Vaclav Havel” — former Czech president and star of “Citizen Havel” (April 27 and 30 at St. Anthony Main).

Despite how his glass-is-three-quarters-empty style of humor might read on a computer screen, Milgrom — young at heart or no — has been, I’d say, in a downright playful mood in the typically frenzied run-up to this year’s fest.

Last week, as I entered his paper-strewn Stadium Village office for an interview and happened to mention that I hadn’t eaten lunch, he did the sweetest thing I’ve seen him do in our 15-year association: He went immediately to his dorm-style fridge and offered his very own Hungry Man meal for this critic’s nourishment. Soon after the offer he said he was only joking (“sort of joking,” he then clarified), but it was too late: I was charmed. No way would I dream of taking a Hungry Man away from this insatiable cinephile.

Afghanistan to Uruguay represented
There’s a high-profile documentary in the M-SPIFF this year called “American Teen,” about high-school kids in small-town Indiana, but, as in years past, the fest is most distinguished by grown-up fare from beyond our borders. Represented in the latest M-SPIFF are roughly 40 countries — including Afghanistan (“Cabal in Kabul“), Iran (“The Willow Tree“), Israel (“Circumcise Me!“), Hungary (“Just Sex and Nothing Else“), and Uruguay (“The Pope’s Toilet“).

So, too, a variety of filmmakers will be coming to Minneapolis from far and wide. Genius cinematographer Ellen Kuras will be traveling from New York to screen her debut documentary “Nerakhoon (The Betrayal),” shot in Laos over the course of 23 years (almost as long as Milgrom has been running the M-SPIFF!); former Minneapolitan Mirek Janek, now working in the Czech Republic, will be coming to introduce “Citizen Havel”; Jian Li is winging in from Beijing with “Bamboo Shoots” in tow; and Mahatma-Saleh Haroun is bringing “Dry Season” from Chad.

Appropriately enough, “The Visitor” — whose writer-director, Tom McCarthy, will himself be visiting from New York — is this year’s opening night film. (It screens Thursday, 7 p.m., at the Block E multiplex.) Whatever its faults as drama, “The Visitor” — about an uptight Caucasian professor (Richard Jenkins) who begins grooving to the global beats in New York’s Washington Square Park, even pounding his own drum — has been perfectly chosen to represent the festival’s horizon-broadening allure.

Again I dare to ask Milgrom the “M question”: Is “The Visitor” a metaphor for the M-SPIFF?

“Yeah,” he says, surprising me a little. ” ‘The Visitor’ is like the festival in that it’s about the discovery of another sensibility, another world out there.”

As a preview of Milgrom’s coming attractions, let me quote the clichéd tagline of an old sequel’s poster: “This time, it’s personal.”

Milgrom: “The whole world has changed so much since I grew up. I’m a Minnesotan, you know, I grew up in a small town. What was considered ‘exotic’ back then were Swedes, Norwegians, and Finns. Now those groups have been supplanted — I don’t know by whom — not to mention the carpetbaggers from all over the world who’ve landed in Minnesota. Minneapolis has become more multicultural and diverse. I’m hardly able to keep up with it myself.”

On one of my recent afternoon visits, I hear Milgrom on the phone, lamenting that his staff is even shorter than usual for the time being.

“Food poisoning?” he asks publicity assistant Dan Murphy, who’s on the other end of the phone and apparently down for the count.

Milgrom gently persists. “Can you take Alka Seltzer? We could really use you in here.”

Seems Murphy won’t be persuaded, but Milgrom will at least press for some vital information. “What’s the name of the restaurant where you got sick?” he asks. “I want to make sure not to go there.”

Milgrom proceeds from the phone to one of many file folders. He’s listening to a classical station on his transistor radio —”just carpet music,” he says, “good for avoiding anxiety, neurosis.”

I suspect it may be working. Milgrom’s demeanor is impressively calm despite the fact that amid looming deadlines there’s scarcely a square inch of free space anywhere in his office. An evidently favored spot for Milgrom’s coffee cups is a corner of his desk that once held a full-page list of phone numbers. Coffee stains have compromised the legibility of some names — which may be just as well, since at least some of those people, unlike Milgrom, have likely moved on.

Clash’s classic question
I’m reminded of the opening scene in “Young @ Heart,” wherein the movie’s cane-toting octogenarian heroine performs a spoken-word rendition of the Clash’s classic “Should I Stay or Should I Go?”

The alt-film guru has asked that hard-rockin’ question himself over the years (“One day it’s fine, the next it’s black,” as per the Clash). But, despite all manner of adversity, including what he calls the “decline of culture” (and tsuris, his fondly used Yiddish word, meaning “pain in the ass”), Milgrom has remained at the M-SPIFF helm.

What about next year?

Following the news that the venerable Bell Auditorium will not be employed for the ’08 fest, as well as reports that Oak Street Cinema is up for sale and could conceivably meet the wrecking ball (in the meantime, it has been relegated to weekend-only screenings of M-SPIFF titles), does Milgrom figure he’ll continue to stay rather than go?

“The thing is, the festival is tsuris, yes,” he says. “But what isn’t a pain in the ass? Taxes, the recession, your car insurance, your health — all of life is tsuris.”

Then why is he laughing?

“Well, what choice do you have? It’s like having a tiger by the tail,” he says. “Once you’ve grabbed it, you’ve just got to hang on.”

What: Opening Night Gala
Where: Bellanotte, 900 Hennepin Ave.
When: Thursday, 9 p.m. to 1 a.m.
Tickets: $10 at the door, free with opening night film ticket.