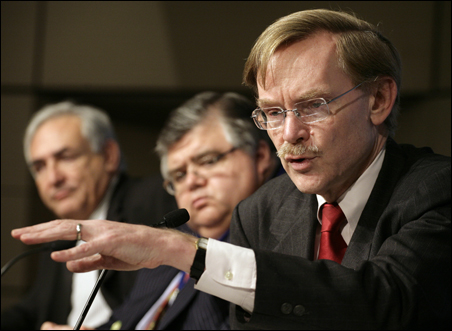 As expected, roiling financial markets and the troubled U.S. economy dominated much of the world’s finance ministers’ agenda when they met in Washington over the weekend. But the talks ended Sunday with alarm over another worldwide crisis: the fast-rising cost of food and the resulting likelihood of increased hunger and instability in developing nations.

The ministers even declared “that shortages and skyrocketing prices for food posed a potentially greater threat to economic and political stability than the turmoil in capital markets,” the New York Times reported.

So far, “emerging and developing economies “have seemed less affected by the financial market developments,” said Agustin Carstens, chairman of the World Bank’s Development Committee at a press briefing. “The current high price of energy, food, and other commodities create opportunities for those countries that are net producers,” he said. “But these prices also create pressures on net importing countries and for great many poor people around the world who are net consumers of food and energy. We have encouraged the World Bank and the [International Monetary Fund] to be ready to provide the analytical support to countries in both categories, and financial support to those countries that are suffering from shocks from import prices.”

Robert B. Zoellick, president of the World Bank, said in the briefing, “Based on a very rough analysis, we estimate that a doubling of food prices over the last three years could potentially push 100 million people in low-income countries deeper into poverty. This is not just a question of short-term needs, as important as those are; this is ensuring that future generations don’t pay a price, too.”

A worldwide New Deal
He called for a New Deal for Global Food Policy — an effort that would include short-term help for those facing the shock of exploding food costs, as well as longer-term help in helping developing nations increase agricultural productivity. He mentioned Malawi as an example of one country that has dramatically increased productivity.

Zoellick “called on governments to rapidly carry out commitments to provide the U.N. World Food Program with $500 million in emergency aid it needs by May 1,” the Associated Press reported.

“Throughout the weekend we have heard again and again from ministers in developing countries and emerging economies that this is a priority issue,” Zoellick said. “We have to put our money where our mouth is now, so that we can put food into hungry mouths. It is as stark as that.”

He and others made it clear that increased starvation — reason enough to act — is only part of their worry.

“Zoellick said that the fall of the government in Haiti over the weekend after a wave of deadly rioting and looting over food prices underscores the importance of quick international action,” the AP reported. Zoellick said “that international finance meetings are ‘often about talk,’ but he noted a ‘greater sense of intensity and focus’ among ministers; now, he said, they have to ‘translate it into greater action.’ “

Dominique Strauss-Kahn, managing director of the IMF, underscored that need. He said “the food crisis posed questions about the survivability of democracy and political regimes,” the Times reported.

Shortage as an agent of conflict
” ‘As we know in the past, sometimes those questions lead to war,’ he said. ‘We now need to devote 100 percent of our time to these questions.’ World Bank and I.M.F. officials noted that political instability had already hit countries as disparate as Haiti, Egypt, the Philippines and Indonesia because of food shortages, forcing some countries to limit food exports.”

According to the BBC, “factors contributing to the price rise include:

• A rise in demand in some rice-importing countries, where populations and incomes are growing.

• The expectation of further price increases — resulting in hoarding.

• Low stockpiles and a long term lack of agricultural investment.”

But another suspected culprit was named — in highly emotional terms — as well: the increased growing of crops for use in making fuel. It is a subject that should interest Minnesotans, who’ve gotten into the corn-ethanol business in a big way; it poses a dilemma for those seeking to harness new fuel alternatives.

“In a world where there is hunger and poverty, there is no justification for diverting food crops to biofuels,” Indian Finance Minister Palaniappan Chidambaram said. Saudi Arabian Finance Minister Ibrahim Al-Assaf, without directly naming the U.S. government’s support for the corn-based ethanol industry, called on countries to “withdraw subsidies for the production of commercially unviable biofuels.”

The Times report said, “Some ministers from poor countries … are growing impatient with the way the West is addressing global warming by subsidizing and encouraging conversion of corn, sugar cane and other food products into substitutes for oil. The shift is helping to drive up prices, they say.

“Mr. Strauss-Kahn said he had heard from many financial officials this weekend that the West’s focus on fuel, at the expense of food, was a ‘crime against humanity.’ “

As Zoellick cajoles developing nations to cough up more money for international aid, the same countries will increasingly be asked to develop means of curbing global warming that have fewer unintended consequences.