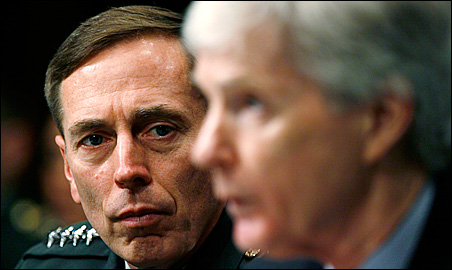 Despite all his detailed charts and articulate statements, Gen. David Petraeus’ testimony Tuesday before two Senate committees failed to answer the questions most Americans are asking and the ones at the heart of this year’s presidential campaign: When will American involvement in Iraq be over and what’s the best way to exit?

Petraeus was facing three presidential candidates, one of whom will be his future boss (assuming he stays in his post in Iraq after the election). Sen. John McCain, the presumptive Republican nominee, and Sen. Hillary Rodham Clinton, one of two Democratic candidates, are members of the Armed Services Committee. Sen. Barack Obama is on the Foreign Relations Committee.

Their presence helped shape the hearings and the media attention.

Elisabeth Bumiller describes the scene in The New York Times. “For the most part, the daylong hearings were a fugue of caution as the three struck somber, respectful stances with General Petraeus in his appearances before the Senate Armed Services and Foreign Relations Committees alongside Ryan C. Crocker, the American ambassador to Baghdad. Although the candidates repeated their main arguments — Mr. McCain said there was significant progress in Iraq, Mrs. Clinton said there was not, Mr. Obama called the war a ‘massive, strategic blunder’ — none used the occasion to grandstand.

“Mr. McCain, who has been under fire from Democrats for his unwavering support of the war, asked a series of skeptical questions, while Mrs. Clinton and Mr. Obama, whose calls for troop withdrawals have been criticized by Republicans as naïve, cross-examined General Petraeus in academic, lawyerly fashion.”

Progress ‘fragile and reversible’
As expected, the general told the senators that after the withdrawal of the “surge” troops, the number of troops in Iraq would level off at 140,000 this summer and that there would be a pause to assess the situation, “saying further withdrawals could be delayed for months after the pause has ended, based on the security situation at that time,” reported the Congressional Quarterly. CQ quoted Petraeus as saying that “significant but uneven progress” was being made in Iraq, that the pause in withdrawals was needed to consolidate security gains and that the progress was “fragile and reversible.”

McCain, as expected, supported that position, saying that if troops are withdrawn prematurely, “Iraq could become a failed state; it could become a haven for terrorist groups to expand their influence.”

“‘What conditions would have to exist for you to recommend to the president that the current strategy is not working?’ Mrs. Clinton asked General Petraeus, with only a slight edge of exasperation in her voice. The conditions, she added ‘are unclear, they lack specificity.’ ”

Trying for an endpoint
For his part, Obama said, “I’m not suggesting that we yank all our troops out all the way; I’m trying to get to an endpoint,” then suggested the United States might define success downward toward a “messy, sloppy status quo.”

The questions and the answers left some observers fatigued.

Gerard Baker writes in the London-based Times that “the hallmark of this entire debate is its continuing unreality. Republicans seem to suggest that the war is going so well that the US should simply stay indefinitely. But senior strategists close to Mr. McCain acknowledge what many in the Pentagon are saying with increasing alarm — that the strains the war is placing on US military capabilities are so great that some significant reduction in the American role is essential some time soon. At the same time, Democratic foreign policy advisers also admit that the chances that their candidate will be able to meet campaign promises and pull US forces out quickly next year — whatever the situation on the ground in Iraq — is equally absurd.

“The reality is that, once the posturing is done and the election is over, whoever wins is going to have to sit down with General Petraeus or his successor — without the television cameras — and figure out a pragmatic resolution to this messy and prolonged American engagement.”

A sense of exhaustion
Newsweek’s Michael Hirsh puts it this way: “Perhaps what was most in evidence on Tuesday — at the beginning of a two-day marathon of hearings before the Senate and House — was the nation’s sense of exhaustion over Iraq. It was on the faces of every legislator, even those who have been most avidly supportive of the president. It was on the faces of Petraeus and Crocker, the military-diplomatic ‘dream team.’ No one seemed to have the fight in them — even Clinton — to take the two of them on. McCain, who had the most at stake in the lack of good news, wore an even grimmer visage than Petraeus’s. Scratching for good news, he settled on the most positive note he could muster. ‘We’re no longer staring into the abyss,’ he said before launching into detailed questioning. Mission accomplished.”

Perhaps as interesting as the main show taking place on live television were some of the side stories of people affected by the hearings and the war.

In a real time blog, Ariel Aleovich of the New York Times introduces us to M.J. Kesterson, who “came all the way to Washington from Twin Falls, Idaho, to show her support for General Petraeus, even though she says her life has been devastated by the war. Her son, Erik C. Kesterson, was killed in Iraq in 2003. ‘None of us like war,’ she said, ‘and when they call us pro-war, it sends chills up our spines. None of us are pro-war. Pro-freedom? Pro-American? That’s what we are.’ “

And Aleovich quotes Michael Marceau, 59, a Vietnam veteran and vice president of the Washington, D.C., chapter of Veterans for Peace, as saying, “We think that General Petraeus and Ambassador Crocker are spouting the administration line. And if they really wanted to get the truth out on the war, the situation in Iraq, the operations there and in Afghanistan, then they need to talk to people who are still on the ground over there and who have just come back.”