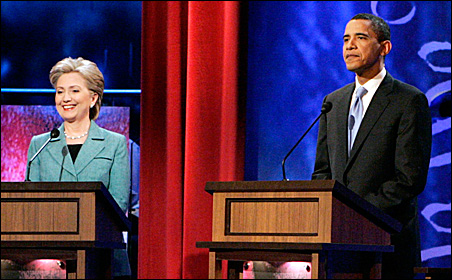 REUTERS/Tim Shaffer
Sens. Hillary Rodham Clinton and Barack Obama get ready for their debate in Philadelphia on Wednesday.

Wednesday night’s debate — the Democrats’ umpteenth, but the first in seven weeks — served up a microcosm of this long contest’s lows and highs: a 45-minute starter of testy back-and-forths on “gotcha moments,” followed by a meaty main course: ultracogent presentations that delineated their views and highlighted policy differences on Social Security, taxes, Iran and Iraq. When it was all over and the judging began, the moderators came out the losers.

“In perhaps the most embarrassing performance by the media in a major presidential debate in years, ABC News hosts Charles Gibson and George Stephanopolous focused mainly on trivial issues as Hillary Clinton and Barack Obama faced off in Philadelphia,” wrote Greg Mitchell of Editor & Publisher. “Wars in Iraq and Afghanistan, the health care and mortgage crises, the overall state of the economy and dozens of other pressing issues had to wait for their few moments in the sun as Obama was pressed to explain his recent ‘bitter’ gaffe and relationship with Rev. Wright (seemingly a dead issue) and not wearing a flag pin while Clinton had to answer again for her Bosnia trip exaggerations. …

“Yet neither candidate had the courage to ask the moderators to turn to those far more important issues. But some in the crowd did — booing Gibson as he exited.”

The two hosts had put Obama on the defensive in the early going. “The encounter, particularly in the early stages, seemed more like a grilling of Obama on a Sunday-morning talk show than a debate between the two candidates,” wrote Anne E. Kornblut and Dan Balz in the Washington Post. “Obama fielded most of the questions calmly, although at times he appeared to choose his words with extreme care as he faced perhaps the toughest series of questions he has encountered since taking the lead in delegates in the nomination battle.”

Indeed, “The first 45 minutes were Barack Obama’s toughest time in any debate,” wrote Chris Cillizza on the Washington Post’s political blog, The Fix.

‘Withering assault’
“He came under withering assault from the moderators (and Hillary Clinton) on a whole host of issues from the comments of the Rev. Jeremiah Wright, Obama’s former pastor, to his decision not to wear a flag lapel to his connections with a one-time member of the Weather Underground. Time and again, Obama dismissed the questions as part of the politics of the past, something that he was running to change. Given both the number and nature of the questions he fielded, it would have been impossible for him to shine in those first 45 minutes. He survived — at least as of this writing — without making any more adverse news, which is an accomplishment in and of itself.”

And, the New York Times’ John M. Broder noted, “The debate capped a day that saw more successes in Mr. Obama’s drive to secure the nomination. Earlier Wednesday, the Obama campaign trumpeted the endorsements of three more superdelegates, a propitious and probably not coincidentally timed boost after a rough five days in which he came under fierce attack for his comments about small-town residents.”

For prospective voters, the Post’s Cillizza saw a silver lining to the opening fracas. “The choice between the candidates crystallized tonight. It is not, fundamentally, a choice about issues or even ideology — it is a choice about approach. Obama is an idealist, using nearly every question to appeal to the better angels in people; Obama sees the world as he wants it to be and believes he can make it. Clinton, on the other hand, is an unapologetic pragmatist; she has been through the wringer that is national politics before and knows how to play the game.”

Peter S. Canellos, in a Boston Globe analysis, made a similar point. “Barack Obama tonight staked his presidential campaign on the idea that the American people will look beyond the inevitable gaffes and errors and character attacks of a 24-hour campaign cycle to meet the challenges of a “defining moment” in American history,” he wrote. “Hillary Clinton staked her campaign on the idea that Americans won’t — and that her tougher, more strategic approach to countering Republican attacks is a better way for Democrats to reclaim the White House.”

Eventually, substance
Midway into the 90-minute encounter, the two got into one of the most substantive exchanges to date, distinguishing their varied positions on everything from Social Security fixes to how to deal with Iran. Within the range of Democratic positions, they truly are not two peas in a pod, and that came out. Clinton would want a bipartisan commission to take on the long-term Social Security fix; Obama would look to raising the salary on which payroll taxes are taken out. Clinton signaled a “massive retaliation” message to Iran in case it thought of ever attacking Israel; Obama sent a less dramatic message of solidarity with Israel — and so on.

Overall, the evening wasn’t likely pivotal. As John Whitesides, political correspondent for Reuters, put it, “The debate, which featured few heated confrontations but plenty of probing and positioning, seemed unlikely to dramatically alter the race six days before the next Democratic showdown in Pennsylvania.”

As for all the brouhaha over what Obama called “manufactured issues” — Clinton’s misstatements on her Bosnia visit, the meaning of the word “bitter” and the like — Whitesides wrote, “Obama seemed to speak for both of them when he chimed in, “For us to be obsessed with these kind of errors, I think, is a mistake.”

To wit, let’s give the BBC’s Matt Frei the last word. In an amusing and insightful riff on last night’s relentless teasing out of perceived verbal missteps, he pleaded for some breathing room out there on the trail, noting that President Bush had turned his own struggles for articulateness into a sort of linguistic charm: “George Bush brilliantly realised the benefit of inarticulacy — if you make a habit of botching language, how can anyone hold a single misspoken word against you?”

No, he wasn’t “arguing for the triumph of botched language,” Frei wrote. “If anything, this drawn-out election campaign has dished up some of the best speeches given on any campaign trail in recent years, from both Democratic candidates. But with our culture of instant blogs and excessive scrutiny, where no candidate can utter a single word without it being recorded and dissected, we are in real danger of scaring our politicians into inoffensive blandness. Then we really wouldn’t know who they really are.

“So let’s cut Hillary and Barack some slack. Let them misspeak without fear of recrimination or persecution — long live ineloquenceness!”