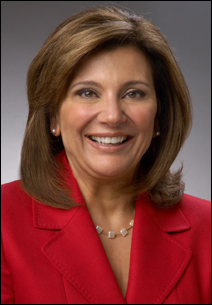 When Kathie Lee Gifford announced her new gig on the “Today” show last week, she quipped, “I’m 8 years older, 10 pounds heavier and half an inch shorter — just in time for HD television.”

KSTP anchor Cyndy Brucato, 57, chuckled when she heard it. Her producers tested out high-definition cameras in their Minneapolis station a month ago, and Brucato served as their guinea pig. “I had to laugh,” she said. “I was thinking, ‘If I look OK, everyone else will.'”

High-def TV brings every detail into stunning clarity. It’s awesome for viewing the pine needles in a forest or the white caps of an ocean, but it’s awful for viewing the pores of an anchor’s face — especially if you’re the anchor.

“It’s scary,” admitted KARE anchor Julie Nelson, 36. “Every bump on your face, every line on your face — you have to let it all hang out. There’s no hiding. With the old format, it was almost like having a bit of a gauze filter. To know that that’s gone is daunting.”

The thought has hurled some anchors into a HD-induced panic. “I know people have kind of gone nuts about [the transition], saying you’ve got to get more makeup,” Brucato said.

‘A shake-down period’
KARE has led the transition locally, switching to high-def cameras one year ago. KMSP is in the process of the making the change, while KSTP and WCCO are preparing to produce HD newscasts in the coming months.

But KARE possesses one element the other stations lack: a makeup artist.

When it came time to convert to HD, Nelson said, “having someone who specializes in makeup made a difference.” KARE uses airbrush makeup, which is lighter and therefore required less tweaking, but standard cosmetics will be trickier, Nelson said. “For traditional makeup, you’d have to be very careful of lines. If you stopped applying foundation at your chin, everybody at home would see exactly where you stopped.”

Brucato anticipates a few bumps along the way. “I’m sure there will be a shake-down period [with makeup application] where you look and realize, ‘Well, this doesn’t work,’ ” she said. “I use a blush that has a red tone in it, so I’ll have to be more careful.”

The imminent conversion has WCCO anchor Frank Vascellaro, 45, lamenting the way economics have trumped cosmetics. “I wish that TV stations still had makeup artists,” he said. “To me, the great irony is that TV stations don’t want to pay for makeup artists for their talent as a cost-saving measure; nonetheless we’re totally perceived by the public based on how we look. With high definition, makeup is an even more important element — maybe even crucial to how we look.”

That’s why Vascellaro is considering seeking outside cosmetic consultation. “I’ve given some thoughts as to ways to do it on my own, to have some people consult with me as to how to do makeup for high-def TV,” he said. “But at the end of the day, I’m not overly concerned. You are who you are, and if you’ve been in this market for a while, hopefully people are watching you because they appreciate your abilities, not just how you look.”

Double standard?
Vascellaro said his wife and co-anchor, Amelia Santaniello, is less relaxed about the HD transition. “She thinks about it and is much more concerned about it than I am. And I think that’s a cultural thing. We’re easier on men. We’re more forgiving of a man with some freckles or a little bit of a scar over his lip. For some reason, our culture sees guys who might not be perfect as rugged, whereas women who aren’t perfect are kind of looked at as worn.

“Robert Redford looks like a sun-dried tomato and women still swoon over him,” Vascellaro added. “The playing field isn’t fair.”

KSTP’s longtime meteorologist Dave Dahl, 53, said he readily dismisses the cosmetic pressure HD elicits. “I know this is kind of a superficial business sometimes, that people do worry a lot about appearances, and I know we have to appear in a professional manner, but as far as wrinkles on your face go, I’ve got enough for a road map, so it can’t bother me that much.”

Brucato, on the other hand, takes some cosmetic measures. “I use Botox,” she said. “It smooths out the eye area. I don’t know how many people would admit it, but it’s very common — more common than you’d think.”

That’s not to say she bows to every aesthetic stress. “It’s not an overwhelming pressure, because I’ve always paid attention to how I’ve taken care of myself. You have to be groomed.”

Nelson weighed in on Botox, saying: “Everybody has to do what they can to feel and look their best. But I think it’s a real fine line. You have to be careful. If you go too far, you cease to look like yourself. I know that can happen. I’ve seen other markets where it’s like, ‘Whoa!’ ”

Uncertain times
The thought of magnifying every facial blemish can make an anchor feel insecure, compounding the timidity triggered by recent layoffs of such well-established broadcasters as WCCO meteorologist Paul Douglas and weekend anchor John Reger.

“I don’t know how [the layoffs] can’t” spur insecurity, Vascellaro said. “It doesn’t matter if you’re working at a factory that makes glass or at a TV station; when people around you start losing their jobs, it affects you.”

In the face of that pressure, he said, some anchors cling to cosmetic factors for a shot of confidence. “Some people get weird about it. They’re like, ‘Oh my god, I better cut my hair and lose four pounds; I don’t want to lose my job.’ ”

WCCO News Director Scott Libin said physical appearance is not part of the hiring or firing process. “I really can’t boil it down for you,” he said when asked about reasons for the recent layoffs, “but I can tell you it’s not about appearance. It’s much more complex than that.”

“Appearance is pretty important to a visual medium,” Libin acknowledged. “But it’s pretty easy to find good-looking people. It’s a lot harder to find the kind of talent and skill set that we require.”

For as much as the industry has evolved and cosmetic pressures have mounted, Libin said he believes someone like Bud Kraeling, WCCO’s former meteorologist, could still forge a successful broadcast career were he to begin today. “I don’t think it was ever his good looks that made people watch him. What he had to offer people went much deeper than that.”

Looks don’t drive viewing habits, Libin said. “I really believe we’ve matured a bit beyond the point where everybody has to be a matinee idol. Frankly, as a viewer, I find it a little alienating to watch a newscast in which everyone looks like some superhuman species.”

The enduring desire for the natural, a quality that seems to distinguish Midwesterners, helps explain what Vascellaro considers an unexpected upside to the HD conversion. “For years, I’ve received a ton of e-mails telling me, ‘Please don’t dye your hair so dark,’ ” he said. “I don’t, and now, with the advent of HD, I’m hoping people will see I do have some grays coming in.”