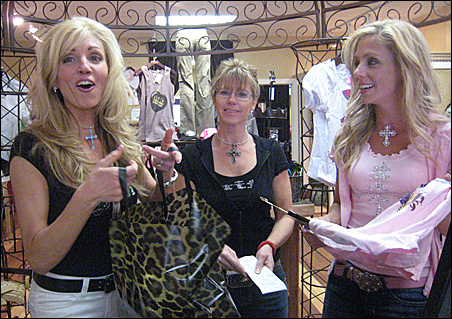 Yes, times are tough. We know that.

We’re reminded of it every day with each disconcerting story on the weak economy, the crisis-ridden housing market, the steady march toward $4-a-gallon gas, billion-dollar airline losses and news of the worst decline in retail sales in over a decade.

Why then, given such a gloomy view, would any retailer give away 100 percent of net profits from one of its product lines?

“We’re not going to do one more thing in life that doesn’t have a bigger purpose,” says Lisa Soldo-Johnson, 40, co-owner of The House of Amore and Fede, a trendy women’s apparel store in Excelsior.

The store is awash in leopard print — on everything from 3-inch stilettos to faux-fur-trimmed jeans. There are pink-and-lime-green cotton hoodies and shorts, and rhinestone-encrusted T-shirts, which bespeak of Soldo-Johnson’s background as a costume designer for ballroom dancers.

Her business partner, Kim Parmater Pederson, 43, invents fitness equipment and has worked as a TV personality for the QVC home shopping network.

Soldo-Johnson and Pederson gave up their former careers to open their store six months ago, along with a third business partner, Debbie Slusar, 47, who handles the books.

‘Faith doesn’t have to look frumpy’
“This had a better, greater purpose, said Pederson, “and we all shifted what we were doing to this.”

The store’s name, House of Amore and Fede, means house of love and faith in Italian. Pederson designs the store’s Faithwear line, which includes T-shirts and accessories sporting huge rhinestone crosses, a testament to the owners’ strong faith belief.

“Faith doesn’t have to look frumpy,” says Pederson, who is also a child ambassador for World Vision, a worldwide Christian humanitarian organization, which was recently featured on America Idol’s charity television special, “Idol Gives Back.” The House of Amore and Fede has partnered with World Vision to help dig deep water wells to provide clean drinking water to villages in parts of Africa. On the store’s walls, among the displays, and on the counter near the register are pictures of children in Zambia.

“When I see an image of these children, I just lose it, because God truly puts the pain right on your heart and you feel that compassion that’s so deep,” says Pederson.

When the store relaunches its website in the next few weeks, 100 percent of the net profits from its web-based Global Missions line will go to World Vision. The line will include Faithwear clothing as well as CDs and books.

“We’re going to start out with just a few items, but we want to be able to add more,” says Slusar.

Well-water parties
“As a child ambassador,” says Pederson, “I want to find ways to really encourage people to sponsor children. You can use any creative way to raise awareness and money.”

Which is exactly what Pederson has been doing for the last five years.

She started out hosting several “well-water parties” at her home, where scores of women were invited and asked to bring a gently used item they no longer wanted. During the party those items were auctioned off and all the proceeds went to World Vision. Pederson recalls making off with a lamp shade trimmed in ostrich feathers for $25 at one such auction.

“We raised enough for three deep water wells,” says Pederson. “And we figured now we can take that to the next level and get even more women involved with the retail store.”

“This is a start,” she says, “We have a whole new group of people who are getting involved.”

And she’s undeterred. For the third year in a row, Pederson and Soldo-Johnson have organized World Vision 29000STEPS, a walk taking place this Saturday inside the Mall of America. According to World Vision, the number 29,000 represents the number of children who die every day worldwide from preventable causes – such as diseases contracted from dirty water. The goal of the walk is to raise $12,000, which is what Pederson says it costs to dig one well. Turnout for the walk the past two years has been a disappointment, with fewer than 100 participants showing up. This year, they hope for better, driven by the cause that has given them a reason for being.

“I gave up my other work because we want our everyday work to have purpose,” says Pederson. “We’re not even making a teeny tiny fraction of what my other business use to make, but there is purpose to it. You know you need to do something when you feel pain.”

The House of Amore and Fede: Doing good during bad times