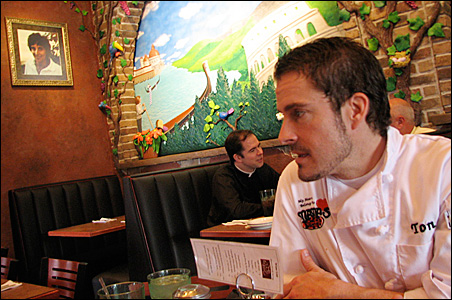 MinnPost photo by Joe Kimball
Tony Mudzinski has worked 80-hour weeks since the re-opening of Mama’s Pizza in St. Paul’s North End neighborhood. The restaurant, which closed in January 2007 because of flooding from a burst pipe, has been extensively renovated, including new murals.

There might have been a brief moment, Tony Mudzinski admits, when he wasn’t 100 percent sure that he’d reopen his Mama’s Pizza restaurant at Rice Street and Front Avenue in St. Paul.

A broken pipe in the upstairs apartment burst in January 2007, completely flooding the popular neighborhood eatery and requiring a top-to-bottom renovation. Sheetrock, flooring, refrigerators, booths, black-and-white television sets in the booths – everything had to go.

The Rice Street area, on St. Paul’s North End, is a neighborhood that’s been going through tough times; its working-class roots are being challenged with foreclosures and business closings. Would he be better off starting over somewhere else? Mudzinski wondered.

But in the end, he felt he owed it to the neighborhood and to the memory of his mother, Peachie, who ran the place from 1973 until her death in 1999.  The restaurant passed to him and his two sisters, who once again got those pizzas back in the oven and started the spaghetti sauce simmering.

The renovation took 11 months, but Mama’s is open again and doing booming business as regulars stream back.

More than just the local lasagna lovers are glad he’s back.

Restaurant re-opening one key to Rice Street revival
The reopening of Mama’s was an important part of an effort to revive Rice Street, say local boosters.  As they welcome a nearby major development, city officials and neighbors know that it’s equally important to retain well-run local businesses. The Winnipeg project, with street-level stores and 56 units of rental housing, is under way on Rice just a few blocks south of the restaurant.

“The neighborhood is thrilled that Tony and his sisters re-opened on Rice Street. Tony has been very dedicated to his customers over the years, and the neighborhood has been loyal to him as well,” said Allison Sharkey of Sparc, a nonprofit that generates investment in the North End, South Como and Hamline Midway neighborhoods of St. Paul.

“People come from downtown, the Capitol, and other parts of the city to eat at Mama’s, which makes the restaurant an important anchor for the North End,” Sharkey said.

Sparc, the city and other groups also have improved sidewalks in the area and started a landscaping program to make the area more attractive to residents and businesses.

About half of Mudzinski’s business comes from take-out pizzas, and the other half from the sit-down fare in the dining room.

He’s kept prices the same: $5.75 for a large-enough plate of spaghetti or ravioli with a meatball, despite the huge jump in food prices over the past year. He’s working 80-hour weeks because he believes it’s important that customers see him there, cooking, greeting and cleaning, so everyone knows he’s in it for the long haul.

Mudzinski’s had one day off since the Jan. 5 reopening: Easter Sunday.

“I’ve lost about 20 pounds, and customers say they’re worried about me,” he said. “Sometimes there just isn’t time to eat. But I don’t mind the long hours — my customers are my family. And I learned from my mom, when you give, you get twice as much back.”

He had the working/casual look going on Monday, wearing his white chef’s jacket with jean shorts and tennis shoes.

He’s still dealing with the insurance people to resolve payment for all the damages. Even some of the equipment that wasn’t ruined by the flood had to be moved out for renovation, and then replaced, because city codes have changed so much over the years.

The upstairs apartment — where the pipe burst — has been remodeled, too. The restaurant manager is living up there — and will keep a good eye on the plumbing.

Mudzinski’s relief at finally being back in business and continuing the family tradition is evident, as he floats from table to table in the restaurant. He accepts congratulations on the renovated dining room, which features higher ceilings, bright wall murals with scenes from Italy, and the large framed portrait on his mother. The tables and booths can hold 45 diners, about the same as before the deluge, but the new configuration seems larger and more open.

“Some people say it’s now way too nice for Rice Street,” he said of the redesigned space. “No, it’s not. The people here deserve the best.”

Tracking another tradition: It’s ice-out time
Speaking of area traditions, details of a closely watched annual event are now official: The ice is finally gone on White Bear Lake. And on Lake Minnetonka.

The ice-out date for both big metro lakes occurred Wednesday. The end of the annual ice age — a traditional harbinger of warm-weather days — seemed to take forever this year.

In fact, although it is slightly later than usual, it’s by no means a record.

According to lake historian and real estate agent Jan Holtz Kraemer, the modern-day record for ice-out on White Bear Lake is May 4. That happened in 1950. Last year, White Bear was ice-free on March 31; the year before, it was April 9.

Mama’s is back, a good sign for pizza lovers and the city’s North End