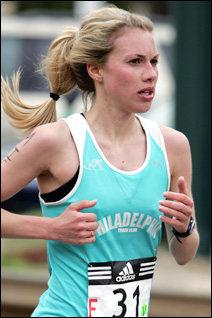 The last time Michelle Lilienthal ran seriously in a race, Johan Santana was still pitching for the Twins, the Dow Jones index was over 13,300, “sub-prime mortgage crisis” wasn’t part of our vocabulary and a guy named Obama was just another junior U.S. senator with audacity and hope.

That was the spring of 2007. So long ago, Lilienthal didn’t even live yet in the Uptown neighborhood of Minneapolis and hadn’t yet joined the stable of Olympic distance running hopefuls called Team USA Minnesota, coached by Dennis Barker.

So, that’s why her first real competition in 11 months, which will come Sunday, is noteworthy for the former University of Wisconsin All-Big Ten track and cross-country runner.

But this race, it’s not some little old country jog. It’s the U.S. women’s Olympic marathon trials in Boston, and Lilienthal is the fastest qualifier from Minnesota and the nation’s sixth fastest qualifier to take to the starting line.

She won’t be in Boston to casually traverse the 26 miles and protect her troublesome left foot.

“Our interest is to go out and compete for a spot on the team,” said Barker, who also coaches at Augsburg College in Minneapolis. That means top three. If she gets there, it will be not because of the miles she ran on the road — as most marathoners have — but because of the workouts she completed on machines or underwater.

The cause of Lilienthal’s competitive break is dastardly plantar fascitiis, that nasty foot ailment that strikes runners, basketball players and weekend warriors. It started last year when Lilienthal, an Iowa high school phenom, was in graduate school in Philadelphia.

She will be one of the youngest, 26, and least experienced contenders in Boston. This will be only her fourth marathon, with each of the other three revealing steep dips in her time. At her first marathon in Philadelphia in 2005 “on a whim” she ran 2:49.22. Six months later, at the Boston Marathon, she was the No. 2 American finisher, with a time of 2:40.23. Later that fall, before she moved to Minnesota, she posted a very fast 2:35.51 at the Twin Cities Marathon, finishing fourth and making the “A,” or top-level, Olympic qualifying time.

But then the foot injury attacked. And, seeking a running community and a return to the Midwest, Lilienthal, masters degree in higher education administration in hand, moved to Minnesota, injured but eager.

She’s been preparing for this mega-race in an extremely unorthodox way. By not really running.

Five, six days a week, three to five hours a day, using the facilities of Lifetime Fitness, a sponsor of Team USA Minnesota, Lilienthal has put in the equivalent of up to 100 miles a week on bikes, in pools, on elliptical machines.

Newfangled machine
In March, when she was really cranking up her fitness, she was on the machines at Lifetime so much she became an NCAA basketball tournament freak, watching and predicting every game.

“I got really good at ‘bracketology,'” she said, meaning that important science of picking NCAA winners. Anything to pass the time for the 5-foot-5, 105 pound wisp of a runner.

She also developed a passion for a newfangled machine housed at the Savage headquarters of ACCUA, another Team USA Minnesota sponsor. It’s an underwater treadmill, which makes a runner’s body more buoyant while allowing her to run, thereby limiting the strain on that left heel. Channel 4’s Mark Rosen did a nice piece on the contraption and it’s at YouTube.

Recently, back on the roads as her foot improved, Lilienthal calculates she had run and exercised in various forms in March up to an equivalent of 170 miles per week.

“I’m really tired,” she said two weeks ago, with a wry laugh, but she has tapered down since then. Her heel still requires treatment. It’s an “X” factor, to be sure.

Now comes the race. It’s will start where the hallowed Boston Marathon does, but the course is very different. No hills, and it’s five loops that will bring the runners around the city and past spectators numerous times. Remember, in a trials race, the field is only 162 women, not one of those mass events. It’s lonely out there.

Olympic marathon trials are traditionally “strategic.” Time isn’t necessarily of the essence. Placement is. Top three go to the Games and the right to breath Beijing’s air for 26 miles on Aug. 17. In Boston, Lilienthal plans to find her pace, see where she stands halfway, and if everything feels fine, to go with the leaders. She needs to be patient and run smart.

“We’re just not sure how it’s going to go after 18 miles,” said Barker. “She could be going great guns.”

“I really don’t know what to expect,” Lilienthal said. “I’m just really excited to race. It’s been way too long since I’ve been able to race.”


Other Minnesota women listed as starting Sunday are Nicole Cueno of Minneapolis, Jenna Boren of St. Paul, Melissa Gacek of White Bear Lake, Erin Ward of St. Paul and Marie Sample of Marshall . .  .  Live coverage of the Trials Marathon will be available on Sunday.