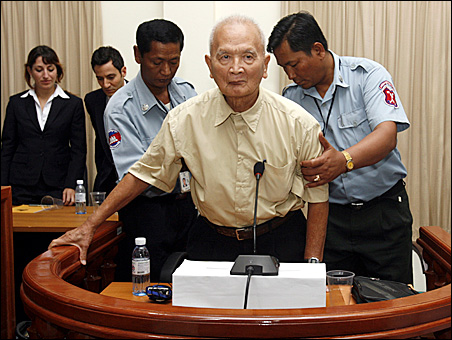 REUTERS/Chor Sokunthea
The most senior surviving leader of the Khmer Rouge, “Brother Number Two” Nuon Chea, is assisted by police officers last month at the Extraordinary Chambers in the Court of Cambodia.

Two of Pengsan Ou’s children were victims of genocide in Cambodia when an estimated 1.7 million people succumbed to starvation and executions at the hands of the Khmer Rouge some 30 years ago.

But Ou of Hampton, Minn., has little hope those responsible for the deaths of his children and others will ever come to justice, despite a tribunal that has been established in Cambodia for that purpose.

The Cambodian government has issued a plea to the international community for an additional $114 million to continue the trials. Cambodian officials, who traveled to the United Nations in New York last week to seek the additional funds, say they will run out of money later this year.

“There is a race against time” and “we are on a cliff edge,” Helen Jarvis, chief of public affairs at the Extraordinary Chambers in the Courts of Cambodia, told The Independent of London.

Ou and other Cambodian immigrants in Minnesota who are watching the proceedings in their homeland are skeptical. (About 6,000 people who were born in Cambodia live in the Twin Cities metro area.)

“If they put too large amount of money on the table, and nothing’s given, they must stop,” said Ou, second vice president of the Minnesota Cambodian Buddhist Society. “It’s a clever trick.

“They will say: ‘If you want this tribunal, you pay for it. If you can’t afford to pay for it, we cannot have it.’ Their argument has always been reconciliation. If the world community won’t give the money, we can’t continue the process.”

After years of arguing between the Cambodian government and the United Nations, the tribunal was set up in 2006 to bring to trial those responsible for the brutality of the Khmer Rouge, led by despot Pol Pot from 1975 to 1979. Pol Pot’s regime imposed radical social engineering on the nation, attempting to remake the county by killing the educated and those with political views.

Pol Pot, who died 10 years ago in Thailand, was never tried by an international court, but the plight of those who suffered under his rule gained worldwide attention in 1984 with the release of the movie “The Killing Fields.” (The movie portrayed the horrors of life in Cambodia, focusing on Dith Pran, a photographer and interpreter who died Sunday.)

‘Experts in stalling’
In its recent report on the tribunal, The Open Society Justice Initiative says the tribunal has been plagued by a lack of transparency, failure to provide documents and no contingency plan to deal with budget shortfalls. The long-delayed trials were scheduled to end next year, but now are expected to run into 2011. So far, none of the Khmer Rouge’s senior figures has been tried.

“The Khmer government officials are experts in stalling,” said Vanna Chan, a daughter of Cambodian genocide survivors who worked in Cambodia last year on child trafficking issues. “They may stall so much that all the remaining key Khmer Rouge officials will die off of old age.”

“It’s so frustrating for Cambodians. Most people think, ‘What’s the point of sending them to jail now?'” Chan said. “Cambodians in Cambodia seem to have no confidence on this tribunal. My family and co-workers think it’s a joke. They’ve had to deal with the corrupted Cambodian government for so long that they know not to have high hopes on what this tribunal will actually achieve. Half of the judges are Cambodian. They will do anything the government wants them to do.” 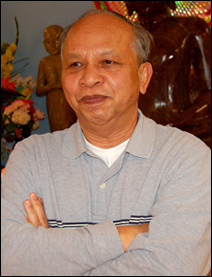 She pointed to the current Cambodian prime minister, Hun Sen, who was at one time associated with the Khmer Rouge.

“I got that sense that nothing would really come out of that tribunal, said Chan, who lives in Shakopee but is working in Paris on a master’s in international affairs. “I remember reading a BBC article that talked about how progress was stalling because of cafeteria food. The Western judges wanted western food and the Cambodian judges only wanted Khmer food. …”

Lidin Su, a Khmer translator and an associate system engineer for Target, said: “They are trying to delay the trial as long as it can until maybe some of those leaders that responsible for the orchestration of the [genocide] pass away one by one. … They could do better than the way they are handling the case right now in term of speed.

“[The] judicial process in Cambodia has always been crippled by the long bureaucracy. The goal of the trial is to try to bring reconciliation to the nation. … I doubt we may not be able to find out the truth until this generation are gone.” She said deadlines should be required before donors contribute funds.

Need for healing
Human Rights Watch has put pressure on donors to consider corruption and other issues before issuing funds. Sara Colm, a senior researcher on Cambodia for Human Rights Watch, wrote in the Bankok Press (PDF): “While the five charged so far are key figures, large numbers of other alleged perpetrators, including former Khmer Rouge government officials, senior military officials and regional authorities continue to live freely. Donors must ensure that the ECCC [Extraordinary Chambers in the Courts of Cambodia] has the financial support and independence necessary to bring additional accused to justice.”

Chan also said that only high-ranking officials are being tried and none of the lower officials. “People are still living next door to people who killed their families,” she said.

Former Minnesotan Sotheara Chhim agrees. Chhim works with an organization that provides counseling to witnesses and victims during the trials.

“The tribunal can achieve justice, which is very important for the healing of genocide wound,” he said. But “the tribunal prosecutes only a few top leaders. … Many Cambodians, my clients, feel more painful with the real and direct perpetrators who are actually killed their love ones. These direct perpetrators are living in the community, where they see and meet every day.”

Ou says the process was flawed from the start. “The bottom line is, the government consists of Khmer Rouge that were overthrown already and charged,” he said. “It’s just a show trial. From the beginning, we didn’t trust that kind of tribunal. It was created with the power that also killed us. Yesterday, they killed us. Tomorrow they are good guys.”

Anne Dysktra, who worked as an educator and human rights worker for 25 years on the Thai-Cambodia border and now lives in Golden Valley, finds the tribunal confusing. “I’m not sure whose agenda is in there,” she said. “I just don’t see how it addresses so many of the issues.”

What Cambodians want, Ou said, is for those who committed the crimes “to be brought to justice. A justice that meets the standards of the international system.

“We’re not looking for revenge. My father died and so I kill you. It’s not like that,” Ou said. “If you ask Buddhist people, we will say we don’t want to do harm to anybody as Buddhists, but we do want crime to be stopped so that peace lasts across the board. We see tragedy in Rwanda, Darfur, Sudan, Kenya. We want it to be stopped. We don’t want it to happen a second time or a third time.”

Vuth lost three siblings, a grandmother and an uncle during the genocide. He hopes international donors will step up. The major donors are Japan, France, Germany, Britain and Australia.

“It’s just a few million from each donor,” said Vuth, who declined to use his full name for fear of retaliation by the Cambodian government. “It will set a good example to the next generation.”

Vuth, who lives in Minnesota, added: “When the Khmer Rouge was in power, everyone just stood and watched.

“These leaders should be brought to justice. We want to let it be known to the world and to Cambodian people that this should not happen again. We want to bring justice to everyone. To me.”

Liz Rolfsmeier is a freelance writer who has written on politics, immigration, and arts and culture for various Midwestern newspapers and magazines.