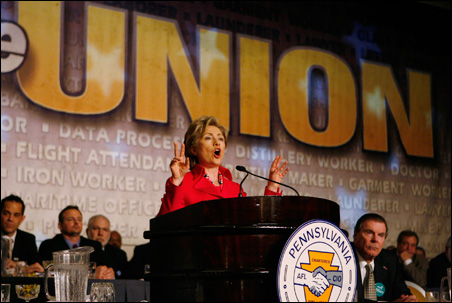 Iraq, health care, who’s ready to answer the red phone — they’re natural hot topics of a presidential campaign season, and they’ve been playing out. How ’bout gender and race? Given the surviving Democratic contenders, of course. But NAFTA?

Even with a shaky economy, the 1994 trade pact makes for a pretty unsexy scapegoat; surely for most voters the North American Free Trade Agreement is either a mystery or a yawner. Yet here we are, with U.S.-Canadian intrigue over signals sent by the Obama camp and the Clintons publicly split on the merits of the deal.

If both Sens. Barack Obama and Hillary Rodham Clinton have made worrying about NAFTA a mantra, there’s a reason. Voters in places like Cleveland and Pittsburgh are concerned about job losses in manufacturing. NAFTA bashing worked well in Ohio; that means we’re probably in for another week and a half of it, because the Pennsylvania primary is on April 22.

With the race close and Pennsylvanians focused on jobs moving elsewhere, one can see anti-NAFTA talk’s appeal. But is it on point? A number of people have been asking economists that question — and some have resurrected studies that evaluated NAFTA’s effects.

A variety of myths debunked
Let’s start with the studies. John Fout of TheStreet.com writes, “The Congressional Research Service noted in 2004 that four studies had been released studying the economic effect of NAFTA, on its 10-year anniversary. The studies include the Carnegie Foundation, the World Bank, the Congressional Budget Office, and the United States International Trade Commission. The CRS found that all of the studies debunk a variety of myths surrounding NAFTA, including:

• It had a very modest effect on trade growth between the U.S. and Mexico.

• It had nothing to do with widening trade deficit between the U.S. and Mexico.

• It slightly increased growth and productivity in the U.S.

• It had little or no effect on aggregate employment in the U.S., and

• It had a small effect on real wages.”

Fout’s conclusion: “Democratic demagoguery on NAFTA proves to be misplaced.”

Michael Fletcher of the Washington Post canvassed economists for a Wednesday analysis piece  whose headline tells you their concurring summation: “Don’t blame NAFTA for downturn, many economists say.”

“It is true,” Fletcher writes, “that the United States has lost about 4 million manufacturing jobs since 1994, the year NAFTA went into effect and eliminated most hurdles to trade and investment between the United States, Mexico and Canada. Not only are items such as clothing, toys and televisions increasingly made abroad, but so are more complex goods. … But many economists blame the march of technology and the increasingly dominant manufacturing role of China, not NAFTA, for that shift.”

‘A net plus, if a modest one’
He continues: “Overall, they said, NAFTA has been a net plus, if a modest one, for the U.S. economy. Even as the number of factory jobs dropped, manufacturing output in the United States was up 58 percent between 1993 and 2006, as U.S. plants produced more goods with fewer workers. Exports are at a record high, and trade among the three NAFTA partners has tripled since 1994. Meanwhile, overall employment in the United States has grown 24 percent and average unemployment is down since NAFTA went into effect. Some cities along the border with Mexico have grown, and farm exports have gone up.”

Among the experts Fletcher cites is Anil Kumar, a Dallas economist who studied NAFTA’s impact. According to Kumar: “On balance, researchers have found NAFTA a slight positive for the U.S. as a whole.”

Robin V. Sears wrote in Monday’s Hill Times, a Canadian newsweekly, that “NAFTA did change relations between the three economies, and the losers were more often the weakest and poorest, especially in Mexico. By giving new incentives to scale, by opening a market of half a billion people for many goods and services, it shoved aside many smaller players. Canadian furniture makers, small to mid-sized Mexican farmers and American light industrial manufacturers have all been pushed to the wall by larger economic players. Would they have survived without subsides and without NAFTA? For a while, perhaps.”

But the real villains, Sears wrote, are “the wrenching changes that globalization is forcing on every economy.

“It is China, India, and Brazil that are responsible for the death of the furniture and textile sectors in North and South Carolina, not Mexicans. Canadians had virtually nothing to do with the decline of the auto parts sector in Ohio; Ontario’s own players in that space are reeling under unprecedented cost pressures themselves. The global economy is shifting west once again. Philadelphia iron and steel makers devastated Manchester and Birmingham in the 19th century. Shanghai and Mumbai are replacing the American and European producers today. Politically, it is much easier by far to blame NAFTA.”

Indeed, Robert A. Pastor of American University told the Post’s Fletcher: “NAFTA has become this piñata that everybody has put their frustrations into.”

It is undeserving of that fate for other reasons, several commentators note: It is critically important for the United States to be integrated into the global market, like it or not, and it helps strengthen U.S. neighbors — with benefits at home.

“If it hadn’t been for NAFTA and the U.S. free-trade deal with Central America,” noted Andres Oppenheimer of the Miami Herald, writing from Santiago, Chile, “America’s closest neighbors would have been much more vulnerable to economic crises and political chaos, which would have significantly increased illegal immigration and threats of a disruption of oil supplies to the U.S. market.”

His opinion: “Clinton and Obama should know better. As former [Chilean] president Ricardo Lagos, a lifelong Socialist Party member, told me, ‘Our Democratic friends are making a big mistake. Instead of defending jobs that are destined to disappear in the United States, they should focus on training U.S. workers to do more sophisticated and better-paid jobs.’ “