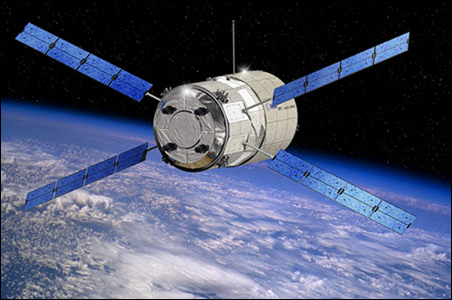 A new era in space travel is set to open Thursday when an orbiting freighter the size of a London double-decker bus is scheduled to dock with the International Space Station and deliver fresh supplies.

At the same time American scientists and space buffs applaud this breakthrough, many also lament the fact that it comes from Europe while the United States prepares to move to the sidelines of space travel.

The three space shuttles still operating in the United States’ fleet are scheduled to retire in 2010. First launched in the 1980s, they are expensive to operate. More important, their safety is an increasing worry for the sake of astronauts aboard them.

The United States will have nothing to replace the shuttles until at least 2015. So, U.S. astronauts will have to hitch rides from the Russians for the foreseeable future and count on the Europeans to ferry supplies to the space station.

That’s not the way it was supposed to be in the proud nation that dashed to the lead of the space race a half century ago and held astronauts as super heroes for generations of kids that followed.

“We will be largely dependent on the Russians, and that is terrible place for the United States to be. I’m worried, and many others are worried,” Griffin said.

“It will be the first time since Sputnik when the United States will not have significant space superiority,” Sen. Bill Nelson, D-Fla., told the Post. Nelson chairs the subcommittee that oversees NASA.

“This is a very serious betrayal of American interests,” Nelson said. “I remain dumbfounded that we’ve allowed this serious threat to our national security to develop.”

One reason for the alarm is that other world powers are rushing forward with space technology. China has made it a top priority, though it still lags far behind the leaders. A new Japanese laboratory was installed on the space station last month, and Japan is recruiting astronauts for a revived space program.

The achievement Europe is celebrating this week is a cargo carrier named the Jules Verne, after the 19th Century writer.

More technically, it is called an Automated Transfer Vehicle, the first of at least five unmanned freighters the European Space Agency plans to send to the space station. It carries more than 16,800 pounds of food, fuel, water and other supplies. Once emptied, it can serve as a container for garbage which will burn along with the space craft on re-entry into the Earth’s atmosphere, according to the European Space Agency.

The Jules Verne was launched from French Guiana March 9. It kept a safe distance from the space station until the shuttle Endeavour’s astronauts finished their work at the station and returned to Earth last week.

Six-hour test
Earlier this week, the freighter performed a dress rehearsal for docking with the space station, the Houston Chronicle reported.

The six-hour test checked out the new freighter’s satellite and laser guidance systems as well as the ability of the station’s crew to stop the rendezvous and turn away the 44,000-pound vessel if it veers out of control during the linkup.

The actual docking is scheduled for 9:41 a.m. CDT Thursday.

Until now the only vehicles delivering supplies to the space station had been U.S. shuttles and Russia’s radar-guided Progress cargo capsule.

Even with Europe picking up a hefty share of the cargo transport, the United States expects to begin sensitive negotiations with Russia this year for transportation to the space station after the shuttles are grounded. And Congress is expected to debate whether to grant a waiver to the law that prohibits certain kinds of commerce with nations that support the Iranian or North Korean nuclear program, the Washington Post said.

NASA’s budget calls for spending $2.6 billion for the transportation between fiscal 2009 and 2013. As it stands now, much of that would go to the Russians.

U.S. officials have known for years that this gap in their space capability was looming.

Since Americans returned from the moon in 1969 there has been no clear national commitment to manned space exploration, according to the Space Policy Institute at George Washington University. America was proud of the achievement. But the nation also debated priorities. “If we can land a man on the moon, we can (fill in the blank),” the arguments went.

Then President Richard Nixon announced in 1970 that “space expenditures must take their proper place within a rigorous system of national priorities … and must therefore be planned in conjunction with all of the other undertakings which are important to us.”

Other undertakings always came along. NASA’s budget was slashed, and the agency was distracted by shuttle disasters — the explosion of the Challenger in 1986 and the breakup of the Columbia in 2003.

The Bush administration has sent mixed signals. In 2004, President Bush announced a “Vision for Space Exploration” which set a goal of developing the next generation of space vehicles, capable of taking humans not only into orbit but to the moon and eventually to Mars.

But last year, the White House opposed a bill that would give NASA an additional $1 billion to make up for some of the costs incurred after the Columbia disaster.

The priorities debate runs as strong today as it did 38 years ago.

Griffin, the NASA administrator, answered it this way (PDF) at a symposium for the U.S. Space Foundation:

“Imagine if you will a world of some future time — whether it be 2020 or 2040 or whenever — when some other nations or alliances are capable of reaching and exploring the moon, or voyaging to Mars, and the United States cannot and does not. Is it even conceivable that in such a world America would still be regarded as a leader among nations, never mind the leader.”