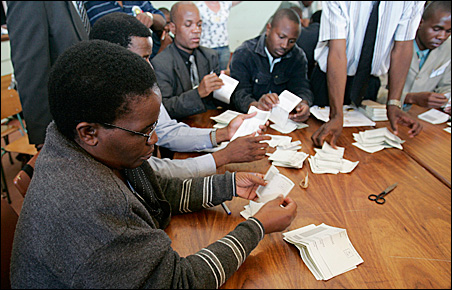 REUTERS/Howard Burditt
Zimbabwe election officials started a partial recount of ballots over the weekend in Domboshawa, outside the capital Harare.

It’s hard to envision a good outcome to Zimbabwe’s increasing violence and political disarray. Nearly a month after the nation’s presidential election, no results have been announced. A partial recount has been denounced as a means for President Robert Mugabe to regain parliamentary control lost in the March 29 election. Normal life is at a standstill as people wait for resolution.

“Violence and repression have escalated dramatically over the past few days,” The Economist of London reported Tuesday. “Pro-government militias roam the countryside, terrorising and beating suspected opposition supporters. The police remain idle or, in some cases, join in with the beatings. … Human Rights Watch, an international group, says that ZANU-PF, the ruling party of President Robert Mugabe, has set up torture camps across the country as part of a systematic campaign to intimidate the opposition, which won the parliamentary elections and, it claims, the presidential vote too.”

No one doubts, the magazine said, that Mugabe “is seeking to assert his control through violence as the country waits, still, for the results of the presidential election to be declared. Rather than make such an announcement, the Zimbabwe Electoral Commission has instead started recounting votes in 23 constituencies, in what looks like an attempt to overturn the opposition’s control of parliament. A reversal of nine seats would be enough to hand ZANU-PF a majority once again.”

Recount termed illegal
The opposition, the Movement for Democratic Change (MDC), led by Morgan Tsvangirai, “calls the recount illegal and is boycotting the exercise, but lost a court case which would have blocked it. The opposition and observers say that ballot boxes have been tampered with since the election.”

Agence France-Presse (AFP) reported, “A unity government led by President Robert Mugabe may be the best way to break Zimbabwe’s post-election deadlock, state media said Wednesday, as the first result from a recount of votes was declared. The state-run Herald newspaper — a government mouthpiece — said it was clear that no side won a majority in the presidential election on March 29 and the best way forward was to form a government of national unity.”

Yet government spokespersons soon said the proposal wasn’t government policy. According to the New York Times, “Deputy Information Minister Bright Matonga told the BBC on Wednesday that the editorial had not been sanctioned by the government, and that the ruling party, ZANU-PF, was still gearing up for a runoff.”

As for opposition reaction to the idea, AFP said, “Tsvangirai, has previously talked about the idea of a power-sharing deal but with himself, rather than Mugabe, at its helm.”

Chinese weapons turned away
Even so, some modestly encouraging signs and some pressure have begun to appear. Dock workers in South Africa refused to unload a shipment of Chinese weapons bound for its neighbor. The United States, concerned that direct action on its part would play into Mugabe’s anti-Western rhetoric, sent signals to Zimbabwe’s neighbors Wednesday, as British Prime Minister Gordon Brown took a more direct route, calling for an international arms embargo.

The tale of the Chinese weapons is not over, but appears to be heading, so to speak, in the right direction. Now “the Chinese Foreign Ministry says a shipment of weapons to Zimbabwe that raised widespread criticism will return to China because there was no way to deliver it,” the Canadian press reported.

“Countries neighbouring Zimbabwe refused to allow the weapons, including mortar grenades and bullets, to be shipped through their territories.”

The West, meanwhile, is stepping carefully. “The United States,” the Associated Press reported, “would welcome the intercession of Nigeria or any other African nation with influence in Zimbabwe into that southern African nation’s electoral impasse, State Department spokesman Sean McCormack said Wednesday.”

The AP said Tsvangirai “met briefly on Monday with former Nigerian President Olusegun Obasanjo seeking his intervention,” after which McCormack said, “As for Nigeria or any other African state’s role in bringing a resolution to the current political crisis in Zimbabwe, we would encourage those who have some leverage with the government to use that leverage to bring about a peaceful resolution to what is a very deep political crisis.”

Strong words from Brown in Parliament
Brown “said on Wednesday he would propose a wider arms embargo against Zimbabwe but an aide said there were no plans to press for one at the U.N. Security Council,” Reuters reported.

“Brown was encouraging other countries, particularly Zimbabwe’s neighbours, to prevent the flow of arms into the country … ‘A message should be sent from the whole of the United Kingdom that what is happening in Zimbabwe — failing to announce an election result, trying to rig an election result — is completely unacceptable,’ Brown told parliament.”

In addition, the Economist reported that former U.N. Secretary-General Kofi Annan “may be willing to mediate as he did in Kenya. Mr Tsvangirai is travelling to west Africa to meet the current secretary-general, Ban Ki-moon, and regional leaders. … Kenya’s new prime minister, Raila Odinga, and Mr Annan have called on the region to do more over Zimbabwe.”

The need for outside help shows in this report from South Africa’s SABC News:

” ‘All hell will break loose and finally Zimbabwe will be on fire.’ That is what one of Zimbabwe’s independent political candidates, Jonathan Moyo, thinks will happen should President Robert Mugabe win the disputed March 29 presidential poll. …

“Moyo said that Mugabe ‘can only win by blatant outrageous cheating and rigging the election.’ Moyo, who won a parliamentary seat in Tsholotsho North in Matebeleland, says Mugabe cannot win a free and fair election. ‘It’s not possible because every Zimbabwean is suffering as a result of the country’s economic meltdown.’ “

And opposition leader Tsvanigirai today made a high-profile plea in an opinion piece in the Washington Post:

“Mugabe has attempted to sell the belief that this election was democratic and that Zimbabwe is a functional democracy,” he wrote.

“Mugabe’s ‘democracy’ is a hollowed-out shell, and in his Zimbabwe, the term ‘democracy’ means ‘denial of truth.’

“The world must know: There is an all-out crisis in Zimbabwe.”