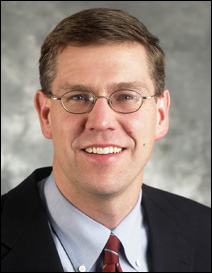 For almost a half century, the 3rd Congressional District has meant victory for Republicans. In successive years, dating back to 1961, Clark MacGregor, Bill Frenzel and Jim Ramstad marched off to Washington, generally not having so much as broken a sweat in campaigns against an assortment of hopelessly over-matched DFLers.

But Erik Paulsen, who will be endorsed/crowned Saturday at the Republican Party’s 3rd District Convention, faces a vastly different task from his predecessors. The 43-year-old seven-term state representative from Eden Prairie is in for a race they never knew.

It’s not that his opponent in November, Ashwin Madia, who won DFL endorsement a week ago, has any particular power base. Even after winning endorsement, Madia remains an unknown, even to most DFLers.

The problem Paulsen faces is that the good old reliably Republican 3rd no longer is so reliable. Voters in the district twice voted for Bill Clinton and nearly opted for John Kerry in presidential races. District voters gave DFLer Amy Klobuchar a healthy margin in her U.S. Senate victory over Mark Kennedy. And there now are more DFL legislators from the district than Republicans.

“I understand this is not a slam-dunk,’ said Paulsen in an interview Thursday.”There are some things in the district that are changing, but in general, I still think it’s Republican. The main thing is, I’m the right candidate.”

Surprisingly, he was the only Republican candidate to seriously seek endorsement following Ramstad’s announcement on Sept. 16 that he was going to retire. Ramstad said he was weary of the travel, weary of representing the “dying breed of Republican moderates.”

Paulsen, married, the father of four young daughters and a project manager with Target when he’s not a state rep, said he pondered whether to get into the race for a couple of days before he decided it was his time.

“I was comfortable with my life,” he said.

But he said calls from a number of supporters made him — and his family — decide it was time to give up comfort for the challenge.

He’s no Ramstad Republican
Though he once worked for Ramstad in Washington and as his state field director and though Ramstad will give Paulsen his blessing at the district convention, Paulsen is the first to admit he’s not a Ramstad Republican.

DFLers have been quick to point out that means Paulsen is a Grover Norquist Republican who has signed the no-new-taxes pledge. Ramstad, of course, was almost universally popular in the 3rd because he was seen as a moderate.

This race between one obscure candidate (Madia) and one who is little known outside of the Twin Cities western suburbs already has become a national race, with money from national interest groups pouring into the district.

“The good thing is that it’s easy to get people excited,” said Paulsen.”I say, ‘How many opportunities will you have to get involved in one of the five or 10 top races in the country?’ ”

“Outside money and groups coming in,” he said.”There’s already been one of those black-and-white grainy pictures of me. Kelly (his spouse) isn’t too fond of that.”

It works both ways. While Paulsen will be painted by the DFL and other interest groups as a far-right zealot, the Republican Party was portraying Madia as a leftist within moments of his winning endorsement.

In fact, Madia was a Republican up until a couple of years ago (which his DFL endorsement opponent, Terri Bonoff, tried to use against him). And in fact, Paulsen is more than an angry, anti-tax, anti-government Republican. He has a global view. His colleagues at the capitol often chide him by calling him “the member from India” or “the member from China.” He’s traveled to India and China because he believes Minnesota’s economic future depends on building relationships with those nations.

The one time he met his opponent was at a University of Minnesota function about Indian affairs last fall. Madia, who had not yet announced his candidacy, was at the event. (His parents emigrated from India before his birth.) The men shook hands.

In coming months, they will get to know each other much better. Certainly, they have a lot to talk about because they have fundamentally different views on the major issues of the day.

Though Paulsen is quick to note that he was not in a position to vote for support of the war in Iraq and that “many mistakes were made” in the early stages of the war, he sees that “the skies are clearing” over Iraq. Madia, an Iraqi war vet, doesn’t see clearing skies and says the military presence must be reduced to 10,000 to 20,000 troops within two years.

In regard to the economy, both agree that Washington’s deficit spending is a big part of the problem.

But Paulsen says “it’s a mistake to send out more checks.” Rather, he talks of “long term” solutions to today’s economic woes by coming up with programs of tax incentives and cutting regulations that would open doors to new innovation. No tax increases are needed. Madia opposes “the Bush tax cuts to the rich,” and ties many of the economic woes directly to the costs of the war.

Regarding health care, both talk of the need to cut costs so insurance is more affordable to more people. But Madia isn’t afraid to use such terms as “universal” coverage.

There are other contrasts. Paulsen, in some ways, is a classic Minnesota pol: He’s white, a family man, a Lutheran and he has a traditional political resume. Madia is Indian-American, a bachelor, his parents are Hindu (he’s less religious than they are) and he’s making his first run for elective office.

“The truth is, neither one of us is very well known,” said Paulsen.

Between now and November, that will change.