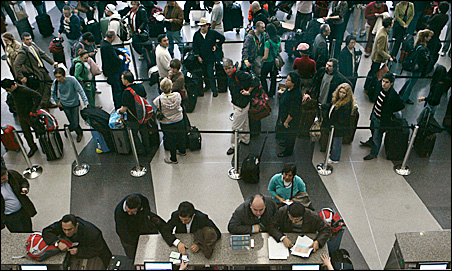 REUTERS/John Gress
Lines and more lines at O’Hare in Chicago after American Airlines canceled 45 percent of its flights last week.

Most Americans don’t remember air travel before deregulation took hold 30 years ago. But now, as carriers and passengers struggle with delays, lost luggage, maintenance problems, soaring fuel prices, and a new round of bankruptcies and mergers — including the monumental marriage of Delta and Northwest — it’s fair to ask the question: Is deregulation working?

Not as well as it once did, perhaps.

If ticket prices and numbers of flights offered between major destinations were the sole considerations, then, yes, deregulation seems to still be doing the job. Airfares adjusted for inflation are lower than in 1978, when Congress deregulated the system. And flights are more plentiful.

But the dog-eat-dog competition of the deregulated era and the ruthlessness required to survive, has taken a terrible toll on airline profitability, airline employees and the quality, reliability and consistency of airline service. Add to that the overwhelmed air traffic control system and the extra aggravation brought on by airport security, and it’s hard to imagine that flying was once actually fun.

Ticket prices are deceptive, as well. In order to get bargains, fliers must increasingly avoid nonstops or travel at inconvenient hours or take circuitous routes. (A low fare from the Twin Cities to Miami might require, for example, a change in Phoenix and a return flight that leaves at midnight.) Meanwhile, the cost of traveling to smaller markets, taking short hops or flying on short notice can be outrageous.

While the industry has maintained a remarkable safety record, recent revelations of cozy dealings between Federal Aviation Administration inspectors and Southwest Airlines resulting in planes flying with cracked fuselages, raise fears that safety may be compromised as carriers struggle to cut costs.

Original goal was cheaper fares
As the New York Times’ Micheline Maynard reported this week, the main goals of deregulation were to spur competition and reduce ticket prices. But now, because the Delta-Northwest merger may encourage other big airlines to pair off, reduced competition may lead to higher fares, particularly as the newly merged carriers shrink their fleets and cut flights to reduce costs. The rising price of fuel is the main culprit.

“Persistently high fuel costs are driving airlines into bankruptcy court or one another’s arms, something proponents of deregulation did not foresee,” the Times noted, quoting Alfred E. Kahn, who is generally considered the father of airline deregulation. Ironically, high fuel prices helped to drive the industry toward deregulation in the 1970s, just as high fuel prices now suggest that deregulation has gone too far.

The unintended consequences are not lost on Congress. “The leash is a very short one,” Rep. James Oberstar, D-Minn., chairman of the House Committee on Transportation and Infrastructure, said last week, suggesting a look at re-regulation.

Just Thursday, Continental and Southwest announced service cuts and fare increases to cope with rising fuel costs. In the wake of the Delta-Northwest merger, meanwhile, there’s anticipation that United and Continental will pair up, and that American will try to absorb US Airways, reducing the number of major trunk airlines to three.

In the dim regulated past of 1978 there were 10 big trunk carriers dividing 80 percent of the domestic market. Eight regional carriers split the rest. The Civil Aeronautics Board ran the system as a public utility, controlling routes and fares, and guaranteeing the companies a 12 percent return on flights that were 55 percent full.

Service was limited, making air travel a more elite experience than it is now. There were no hub airports and no hub-and-spoke systems. There were no frequent-flier programs to instill loyalty. Twin Cities travelers would often fly to Chicago on Northwest, for example, then change to Eastern or Delta for a flight to Atlanta. On a regional airline like Piedmont, it wasn’t uncommon for a flight to make three stops between Charlotte and Washington, D.C.

The system was bureaucratic and inflexible. World Airways waited six years for permission to begin low-fare service between NewYork and Los Angeles before the request was denied. Continental waited eight years for the go-ahead to fly a Denver-San Diego run.

Deregulation profoundly changed airline policy and geography. Some of the nation’s signature carriers couldn’t compete in the free-for-all, including Pan Am, TWA, Eastern and Braniff. Regional carriers like Republic, PSA, Southern and Ozark were swallowed by bigger companies. Discounters like Southwest, Jet Blue and Air Tran stuck, while scores of others went belly up. Altogether, more than 150 airlines either sought bankruptcy protection or disappeared in deregulation’s first 30 years. Since 2001, the industry has lost more than 100,000 jobs. Several major carriers have walked away from pension obligations.

Nor was it anticipated that hub operations and frequent flier cards would decrease competition. If foreign carriers, subsidized by their governments, begin service in the domestic market, U.S. airlines will suffer further disadvantages.

David Morris, writing in Travelwisconsin.com, calculates that the whole cost of deregulation outweighs the apparent savings. “Yes, we paid a price for airline stability and continuity and job security (and pretzels, pillows, meals and movies). But the price was modest. Overall, if we take into account the full costs to employees, customers and communities, the regulatory era almost surely had a more positive cost-benefit ratio than the one in which we now live.”

Most observes don’t expect regulation to return. But they do expect higher costs for the traveling public. “Eventually, prices have to go up for these guys to make any money,” Ross Aimer, CEO of the consulting firm Aviation Experts, told Chicago’s Medill Reports.

As for deregulation’s faltering ability to sustain competition, some analysts prescribe a new public-private arrangement. “No one suggests returning to the heavily regulated system that existed in the past. But the starting point for a new policy mix is to acknowledge that the airline business, by nature, is a public and private partnership,” Richard C. Leone wrote in NJVoices.com. “Routes, airports, safety and the licensing of personnel and the planes largely belong in the public sphere. In this environment one goal of government policy must be to keep enough airlines flying and to maintain enough system capacity to ensure competition.”

Some analysts suggest restricting airlines to a certain number of gates per airport and offering tax incentives to modernize domestic fleets. “The current crisis,” Leone wrote, “underscores the need for Washington to get to work on preserving competition among airlines while there is still something left to work with.”

The unintended consequences of deregulated skies