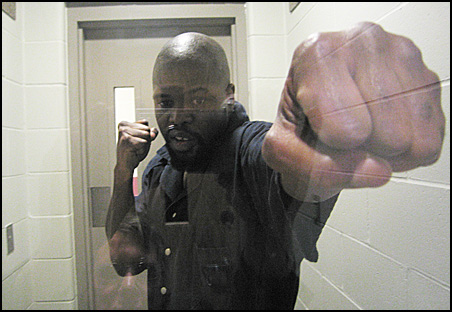 MinnPost photo by Mike Mosedale
Kwan Manasseh, a former boxer, has had many run-ins with the law and is now in jail for stealing copper.

In the summer of 2004, the last time I saw him, Kwan Manasseh was trying to make a name for himself as a professional boxer. It wasn’t going well. I spent the better part of two months in his company, while researching a story about “opponents” — a term boxing aficionados use to refer to those limited fighters handpicked by promoters to make a hometown favorite look good. At 39 years old and the loser of 20 consecutive bouts, Kwan met anyone’s definition of an opponent.

Kwan was tough, though. He went the distance in 16 of those 20 losses, remaining upright by dint of will as he took beatings from younger, stronger men, usually for $100 per round. At that point in his career, Kwan didn’t train much. He had bigger problems: He was homeless and, most of the time, broke. Sometimes he stayed in the shelters, where he decried “the ghetto attitudes” of his fellow clients. Other times he slept on a flattened cardboard box in the storeroom of a now-defunct candy store on a rough stretch of Lowry Avenue.

Kwan liked to recite his poetry, loudly and with conviction. He delivered passionate soliloquies on morals, child-rearing techniques and his visions of Jesus. He liked to laugh. He even volunteered some over the years, working both for the city’s Park and Recreation Board and Keith Ellison, back when the future congressman — Kwan’s attorney in a past criminal case — was making his first run for the state House.

If Kwan was a hard-luck character, and hard not to like, his rap sheet cast light on a darker side. Growing up in Detroit, he slung drugs, got shot and, over time, pleaded guilty to an array of criminal charges, including receiving stolen property, felony assault and drug dealing. Having served about a dozen years in reform schools and prisons, he was usually open about the wrongs he committed. “I messed up a lot of people’s lives,” he said bluntly. “Growing up, I never learned anything but how to be a triple a-hole.”

In August 2004, Kwan fought his final professional bout. It was a low-rent card at a sports bar in Fridley, and he suffered a dispiriting loss. When I gave him a ride back to Minneapolis, he deliberated long and hard about where to be dropped off: Pizza Luce for a slice or the shelter for a shower. He chose the pizza.

After that, I didn’t hear much about Kwan, only that he had tried, unsuccessfully, to catch on as a trainer at a local gym and later returned to Detroit, where he still had family. Recently, a mutual friend informed me that Kwan was back in Minnesota and back in jail, this time for copper theft.

Armload of copper pipe
According to a criminal complaint filed in Hennepin County District Court, Frederick Laderrell Shaw — the “slave” name Kwan was born with and which he now refuses to speak — was arrested on Nov. 21 after a Minneapolis police officer spotted him walking on a North Side street with an armload of bent copper pipe. Asked where he got the copper, Kwan initially told the cops he found it in the vicinity of 2321 Fremont Ave. N., a vacant nine-unit apartment building that was condemned after a 2005 fire.

A caretaker called to the scene identified the pipes as coming from the building. Kwan was charged with third-degree burglary and theft. Although he denied breaking into the building, as usual, he quickly took a plea, copping to the burglary charge.

When I met him at the Kandiyohi County Jail, where he is now serving a 27-month sentence, he seemed changed. He had grown a beard. But that wasn’t all. He looked older and harder. He slurred more than I recalled. At one point, he complained that his mind was “foggy.”

He was angry about the length of his sentence. “I figured I’d just get 90 days in the workhouse,” he said, before reiterating his claim that he hadn’t stripped anyone’s home, that a kindly couple had given him the 10 feet of copper pipe that caused him so much woe. If he could only withdraw his guilty plea, he said, no jury would ever convict him.

At the same time, Kwan was philosophical about his predicament. “Three things in life you never go to prison for,” he announced. “That’s working too much, going to school too much, going to church too much. You don’t get arrested for that. But you go on the block, you get block results.”

Kwan didn’t deny that he had done his share of scrapping. After moving back to Minnesota from Detroit last October, he said, he’d spent much of his time cruising North Side alleys. “I spent my days collecting cans and copper. That was my job,” he said. “One time I made $200. I went to the market and bought a winter coat and a pair of boots. Then went to TGI Fridays, had me a meal, had a beer, watched a little TV. Next day I turned in two bags of cans, that was about $50 worth. I went to Champps and ate and watched the basketball game.”

Minneapolis Police Officer Rich Jackson doesn’t know Kwan Manasseh. But Jackson, who works on problem-properties issues on the North Side, knows plenty about metal thieves. He was assigned to the beat three years ago after a rash of house explosions caused by burglars who had severed gas lines in pursuit of copper. Jackson, who estimates that he has arrested “close to 70 people” for crimes related to metal theft, said he typically investigates two to three house stripping cases every week. In the past three years, he said, police in the North Side’s Fourth Precinct have arrested about 500 people for metal theft.

The drug connection
In Jackson’s view, there is one common factor among metal thieves: drug addiction. “It’s easy money. You rip a stainless steel sink out of a house, that’s 10 or 15 bucks. You can get a small rock of crack or a pop of meth from that. If you rip 30 pounds of copper out of house, that’s 90 dollars. Two or three good hits of meth. If you’re a drunk, you’re looking at a few days of boozing it up good,” Jackson said.

Even in the case of organized metal rings, according to Jackson, there is virtually always “a drug guy” — a person whose role is to acquire and distribute the drug of choice to those doing the scrapping. Usually, he said, the drug is a stimulant, crack or meth. That makes sense given the energy demands of certain types of metal theft. 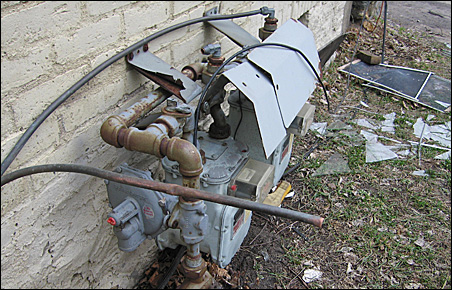 MinnPost photo by Mike Mosedale
Thieves cut the gas pipe at the meter at 2518 North 4th St. in Minneapolis and stole the copper pipe.

In 2006, Jackson investigated a local ring in which prostitutes were recruited for the tedious process of stripping rubber coating from enormous spools of pilfered copper cable. In exchange, the women were supplied with hits of meth. “With meth, when you’re geeking, you’ve got to have something to do. So if you keep them high, they keep busy,” Jackson explained.

Some rings are especially large and sophisticated. Jackson points to the recent theft of 6,000 pounds of copper tubing from a Minneapolis business. The contraband was recovered in a storage space at a North Side warehouse, which, according to Jackson, had been converted by the thieves into a virtual live-work space, complete with a couch, refrigerator and sleeping loft.

Other scrap thieves, working alone or in smaller groups, are much more impulsive and opportunistic, stealing anything they come across that can be sold to a recycling yard. One increasingly popular target: the aluminum siding on vacant or foreclosed homes. Typically, Jackson said, scrappers will tear down whatever they can reach from the ground. “You’ll see houses where all the siding has been ripped off to a height of eight feet. But if there is a tree next to the house that they can climb, you’ll see a section higher up that will be ripped off.”

Despite the rising number of arrests and investigations into metal thefts, Jackson expressed frustration over the justice system’s handling of the epidemic. “Nobody is really taking copper theft seriously. This is what usually happens: We arrest someone for copper theft, we bring them to jail and charge them with burglary. The county attorney says, ‘Who’s the victim?’ But if the house is in foreclosure, and the bank hasn’t yet taken possession and no one is in control of the house, you don’t have a victim. If there is no victim to the crime, you can’t charge them with burglary.”

‘Livability crime’
Dusty Murphy, a community prosecutor who works on the North Side for the Minneapolis City Attorney’s office, acknowledged that metal theft cases can be hard to prosecute. “A lot of times we’ll want to charge someone with possession of stolen property but we don’t know where the copper came from, so we can’t,” Murphy said.

Still, he added, the city has begun to address metal theft as “a livability crime,” not unlike drug dealing or prostitution. In the case of one convicted scrap thief, Christopher Brown of Minneapolis, Murphy sought and received an unusual stipulation in the sentence: for one calendar year, Brown is subject to a geographic restriction, barring him from going within a block of the scrap yard district on North Second Street.

In even the most serious cases of metal theft — those instances in which copper stripped from a home leads to an explosion — successful prosecutions are few and far between. “We do investigate but usually it goes nowhere. Nobody sees anything,” said Sean McKenna, an arson investigator with the Minneapolis Police Department.

Back at the Kandiyohi County Jail, Kwan Manasseh insisted that he’s been done wrong by the justice system. He only pleaded guilty, he claimed, to get out of the Hennepin County Jail where he worried he would “catch an assault charge” and wind up doing more time.

“I ain’t a dope fiend, I ain’t an alcoholic, and I ain’t no crackhead,” he declared. “I’m just a man who is having a hard time.” And then, as is his custom, he burst into verse, shouting out a poem he wrote behind bars.

“The truth it does hurt sometime/This I can’t deny/And here’s the reason why/The truth only hurts the people/Who would rather live a lie.”

This is the first project financed by the new MinnPost Watchdog Journalism Fund.

Part one: On Minneapolis’ North Side, copper-theft epidemic adds to mounting housing problems

Skyrocketing foreclosures and vacant buildings coupled with a surge in worldwide demand for metals have produced an epidemic of thefts on Minneapolis’ North Side: thieves are stripping houses and other buildings of copper to sell to scrap yards. The crimes are dangerous — buildings have exploded after gas lines were severed — properties are becoming almost worthless and neighborhoods are falling into decline. All in pursuit of a penny ante score.