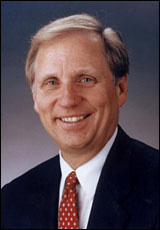 When the legislative session ended with bipartisan agreement earlier this month, Republicans and DFLers slathered on praise like it was a low-cal spread. DFL House Majority Leader Tony Sertich called it “the most successful session in the last decade.”  House Speaker Margaret Anderson Kelliher declared it the most productive session in a “very, very long time.”And Republican Gov. Tim Pawlenty said the end product was “very good.”

But there is a dissenting view from someone who has been there before — former Republican Gov. Arne Carlson, Minnesota’s second-longest serving chief executive.

The high point of the session came early, not at the end, Carlson said in a telephone interview with MinnPost. It was Feb. 25 when six House Republicans joined DFLers and slapped down Pawlenty’s veto of the $6.6 billion transportation funding measure which included a gas tax hike and authorization for sales tax increases in metro counties.

“That took courage; it took vision,” said Carlson.  After that, with a few exceptions, the session was unremarkable and an exercise in butt-protecting politics, he said.

After the veto override, legislators’ underlying concern became getting safely by this November’s general election when House members run again.  That election comes before the next budget forecast, which will be grim, Carlson predicted. And Pawlenty?  The governor wanted to get through the Republican National Convention with his conservative, anti-tax credentials intact, according to Carlson.  The September convention is in the Twin Cities and Pawlenty continues to be mentioned as a possible vice presidential partner on Sen. John McCain’s dance card.

Short-term fix
The final agreement — which includes a three-year cap on property tax increases, some additional local government and school aid, health-care coverage for several thousand more Minnesotans — is a short-term fix, said Carlson.  Legislators did not confront the long-term budget squeeze looming in the next biennium.

“The tough decisions are those that require legitimate cuts in spending or legitimate tax increases,” he said. Those were not addressed. “They had political goals that served them well.”

When Carlson was elected in 1990, he faced a projected deficit of $2.4 billion when the total budget was smaller, compared to the $935 million shortfall Pawlenty and legislators handled this year. The fix then included income and sales tax increases.

Carlson’s guess is that the November 2008 budget forecast and surely the following one in February 2009 will show a deficit measured in billions of dollars because leaders did not attack this year the systemic causes of the shortfall.  In addition, much of the budget reserves were used to balance this year’s bottom line and fiscal shifts have been all but exhausted.

The transportation funding bill was vital, Carlson said of the 2008 session.  Buying a new state park on Lake Vermilion was nice.  But the heavy lifting of impending budget shortfalls was avoided.  “So I’m not one who stands up and gives this [session] a standing ovation.  Let’s see what it looks like in January [when the next Legislature convenes].   I don’t want anyone to tell me they’re surprised.  That word is worn out.”