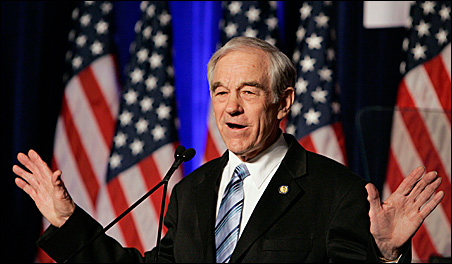 The GOP is the party of limited government. It’s the party that touts fiscal responsibility. It claims to be the party of principle. The Minnesota Republican Party puts a premium on loyalty, yet it doesn’t bind national convention delegates to its caucus presidential poll. So why is the state GOP being so hard on Ron Paul supporters with track records of supporting limited government, fiscal conservatism and loyal service to Republican candidates?

After Paul supporters won six of 12 delegate slots to the GOP national convention at Fourth, Fifth and Sixth District conventions in early April, GOP leadership expressed attitudes toward Paul supporters that ranged from dismissal to outright antagonism. But among rank and file conservative GOPers, there is a begrudging respect for the Paulites’ quixotic quest to drag the Republican Party kicking and screaming back to its Goldwater/Reagan principles.

“We’re telling our fellow Republicans that it’s OK to defend the Constitution,” said Minnesota state coordinator for Ron Paul, Marianne Stebbins. We’re telling them it’s OK to speak up against amnesty [for illegal immigrants]. We’re even acknowledging that nation building might not be the best idea and that we should stick to defense, particularly that of our borders.

“We’re not getting vast numbers to say ‘get rid of the Federal Reserve,’ but we are hearing more talk about ‘sound money,'” she added.

Following Paul’s success at the GOP district conventions, Minnesota Republican Party Chairman Ron Carey said that the delegates’ decision not to unite behind McCain only hurts the Republican Party.

Minnesota GOP communications director Mark Drake said: “I would just say that the nomination has been decided and John McCain is going to be the Republican on the ticket running against Senator Clinton or Obama. Ron Paul had his chance but didn’t win.”

Although the Republican nomination is not in doubt — Arizona Sen. John McCain has more than the requisite number of pledged delegates necessary to secure the GOP nomination — the Minnesota delegate drama threatens to hoist the state GOP on its own petard. Minnesota Republicans have talked the talk of grassroots activism and a bottom-up process. Will they walk the walk when Tweedledown doesn’t agree with Tweedleup?

“Until the nomination is done [at the convention], we should continue debate,” argues Stebbins. “Even if Ron Paul may not be the Republican nominee, it’s still healthy for the party to debate the issues.”

Principle vs. pragmatism
There are significant differences on campaign issues between Paul and McCain. Many are simply policy differences, not unlike those among the once-crowded GOP field vying for the nomination. Others, however, are nuanced by an appeal to principle rather than the pragmatism of appealing to polls and popular sentiment.

“Ron Paul’s platform is the Constitution. McCain-Feingold [campaign finance reform] is a blow to political speech and the First Amendment,” said Stebbins. “Ron Paul believes national defense includes defending our own borders. McCain-Kennedy [immigration reform] mocks the rule of law through amnesty and leaves our borders open and our defense vulnerable. Ron Paul believes in reducing the size and intrusiveness of government, reducing spending. McCain-Lieberman [climate stewardship] is a bloated invasion of bigger government. … Ron Paul wants to return government to its proper role, [deferring power] back to the states.”

While many in the conservative camp of the state GOP come down on the Paul side of the equation on immigration and fiscal issues, the big point of departure is Paul’s unequivocal opposition to the war in Iraq. Paul was one of six Republicans voting against authorization of use of force in Iraq.

“My number one issue with the Ron Paul movement is it’s anti-war/isolationism. I see no room for internal debate on where the party stands on that issue,” said Aplikowski. “The Democratic Party is much more the home for the anti-war sentiment the Ron Paul people I have dealt with hold.”

However, unlike many Democrats, including Sen. Hillary Rodham Clinton, who voted for authorization in the Senate, Paul’s vote was not affected by statements about weapons of mass destruction. His support for U.S. withdrawal, unlike Clinton’s position, isn’t predicated on being somehow misled by the administration. Paul’s position on Iraq is based on principles that many would argue are fundamentally conservative.

“Ron Paul argues that only Congress has the constitutional power to declare war,” Stebbins said. “He believes preemptive war is a mistake and causes more security problems than it solves. If regime change is a legitimate reason to go to war, where do we stop?

“We have already been successful in reframing the debate in the GOP, at least to a degree,” Stebbins added. “And there is still a debate. We’re hearing that many grassroots party members are privately relieved that, in the wake of the election of Ron Paul delegates, we’re not going quietly down that slippery slope to the left.”

Some long-time GOP activists like Aplikowski, who have also criticized the GOP from the right, say the Paul people want to take over the party and expel anyone who disagrees with their libertarian social and foreign policy views.

“It is really a little annoying for some of us who not only have been trying to hold the party accountable, but also spent years building it up to have a bunch of strangers come in and throw us out with the bath water with misleading tactics,” said Aplikowski.

‘We are Republicans’
Stebbins sees the Paul-inspired controversy between the party establishment and grassroots activists as a battle over power, not necessarily a conflict over issues or a conservative/libertarian split.

Stebbins has been heavily involved in the Republican Party for 16 years. Twice Stebbins chaired her district Basic Political Organizational Unit, the ongoing foundation of local Republican activity between election cycles. She ran for the state Senate as a Republican, and was a staffer on campaigns for Republicans Tad Jude and Gen Olson, a Young Republican National committeewoman and more. That’s hardly the resume of an interloper into GOP politics. Among Paul supporters, Stebbins is the rule, not the exception.

Steve Rogers, who is a delegate to the national GOP convention from North Minneapolis, is a long-time Republican and a member of the Minneapolis Republican Committee. He’s been a GOP ward and precinct chair. Attracted to Paul because he is a “principled” candidate, Rogers intends to support the party and remain active during the election.

“I have a number of concerns about John McCain, and I wish he would begin reaching out to conservatives to make me more comfortable about him,” said Rogers. “As he is the presumptive nominee, I will grudgingly vote for him in November. I am a loyal Republican and very active in several conservative campaigns.”

Kris Broberg, another national delegate and a Paul supporter, has been active in Republican politics for 18 years, serving on the Robbinsdale City Council and as a precinct chair in Minneapolis. He worked on campaigns for conservative Rod Grams. A Republican drawn to the party in the Reagan years, Broberg labels himself “100 percent Republican” but “99 percent sure he can’t bring himself to vote for McCain.”

“I don’t think having John McCain as president advances the cause of the Republican Party — or the United States of America,” Broberg said. “But I will be working hard on campaigns of several Republic candidates.”

There are about 15 Paul supporters running as Republicans for various state and local positions, Stebbins said. Many Paul supporters, in Republican politics for the long haul, are actively involved in local Republican organizations.

‘We all benefit’
While the GOP leadership takes a dim view at best of pesky Paulites crashing the party, in the more free-wheeling blogosphere Republican faithful, even those disagreeing with some of Paul’s positions, say Paul and his supporters have sent a wake-up call to GOP leadership.

Blogging at “Shot In the Dark,” Mitch Berg called the Paul delegate coup a “teachable moment.”  Reaction to the “Ronulans” reminded Berg of how irate some long-time GOP activists in the Sixth District were over  Bachmann’s “tactics” when she garnered the nomination for Congress over state Reps. Jim Knobloch and Phil Krinkie and businessman Jay Esmay. “She got her people to go to caucuses and conventions and to vote for her,” Berg wrote with mock sarcasm. “Let’s give credit where credit is due; [Paul supporters] did conventions the way you’re supposed to … by organizing, by motivating and having their people show up.”

At the Wright Country Republican blog, Drew Emmer summed up what might ultimately be the Paul effect: “The disproportionate reaction is what I would expect more likely from a lunatic democrat … I don’t agree with all Ron Paul’s positions. But I do see the incredible contribution his grassroots organizing has made this year. He’s a peculiar man … that inspires conservative activism. That’s a good thing. We all benefit.”

Said Stebbins: “Paul’s campaign may turn out like Goldwater’s. Goldwater paved the way for Reagan. Paul may be paving the way for the next Reagan.”

Craig Westover writes about politics and public affairs. He can be reached at westover4 [at] yahoo [dot] com.

Beyond McCain: Ron Paul’s supporters hope to reshape the GOP