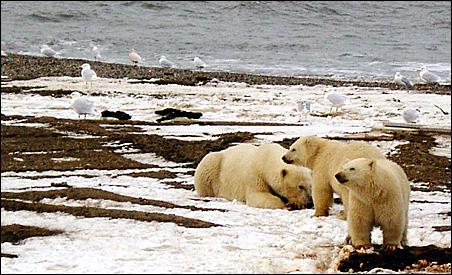 REUTERS
A polar bear sow and two cubs are seen on the Beaufort Sea coast within the Arctic National Wildlife Refuge.

By its recent listing of the polar bear as legally “threatened with extinction,” the U.S. Interior Department has acknowledged that climate change has imperiled the popular mammal by causing arctic sea ice to shrink, interrupting the bear’s critical wintertime feeding.

But the listing itself came as a mixed blessing, with some even wondering if the Endangered Species Act (ESA) itself may be threatened. That’s because of the way Interior Secretary Dirk Kempthorne — who, since his appointment two years ago, has set a record for going the longest of any Interior secretary without adding any plant or animal to the endangered list  — said he’ll go about protecting the polar bear.

First, Kempthorne said that the ESA should not be used to address global warming. This means that climate change — the reason the bear is in trouble — should be addressed in other ways, for other reasons. It appears the only effect of the listing, therefore, is to prohibit the importation of bear carcasses and parts by hunters or collectors. Kempthorne is part of an administration that has neglected climate protection — to the extent that Republican Sen. John McCain said in Oregon last week that President Bush has “wasted eight years” by initially denying the presence of climate change and, now, refusing to devise policies to address it.

Second, Kempthorne said that Arctic oil and gas operations — which affect bear reproduction — won’t be limited by the listing.

Legal and scientific pressure
In announcing the listing, Kempthorne responded to two years of legal pressure to act. As well, scientists in the U.S. Fish and Wildlife Service (FWS), which is part of Kempthorne’s department, have insisted that most U.S. species of the bear are in trouble.

(Canada has not moved to elevate the bears’ status, maintaining the mammal’s listing as “of special concern.” Polar bear populations in Canada include 13 subspecies, only five of which are officially in danger. In the Alaska, there are far few subspecies, and all of them are in some level of decline.)

Once a plant or animal is listed as “endangered” or “threatened” under the ESA, there follows the development of a “recovery plan” that by law must include a description of site-specific management actions necessary to help the listed species to stabilize and recover. This is what happened with Minnesota’s gray wolf, which eventually was removed from the “endangered” list because recovery plans enabled wolf populations to successfully expand.

But with the polar bear, simple things like limiting hunting won’t help much. Among other leading advocates pushing global warming policies, the Natural Resources Defense Council (NRDC) has long directly linked climate change to the polar bear’s decline. Indeed, Kempthorne admitted as much in listing the bear as threatened, and Interior’s announcement includes this language: “The listing is based on the best available science, which shows that loss of sea ice threatens and will likely continue to threaten polar bear habitat.”

Key protections off the table
Given that the bear’s degraded situation is so tied to climate change, observers are finding it difficult to understand how any recovery plan cannot include ways to address climate change. On Bloomberg.com, Georgetown University law professor Lisa Heinzerling reacted to the administration’s actions this way: “The Department of Interior has, in short, worked very hard to make sure that its listing of the polar bear under the Endangered Species Act does not trigger the usual protections that act provides.”‘

There are an estimated 20,000 to 25,000 polar bears throughout the Arctic, and their numbers are shrinking along with the documented shrinkages of sea ice as the climate warms.

NASA says that last September its satellite monitoring of pack ice showed ice levels at historic lows. Northern latitudes are warming twice as rapidly as the rest of the globe, according to a 2004 scientific assessment, and by the end of the century annual ocean temperatures in the Arctic may rise an additional 13 degrees Fahrenheit.

Unlike their grizzly and black bear cousins, polar bears don’t hibernate, because winter is when they roam pack ice and gouge-feed on walrus and seals, returning to land to reproduce.

Open ocean forces long swim
With climate change the summer ice in the Beaufort Sea has declined to the extent that there’s now open ocean between the ice pack and land, forcing bears to swim to shore. Many don’t make it; scientists flying over the open seas have reported seeing floating bears, the result of drowning due to exhaustion from the long swim.

Of those who do make it more and more bears are malnourished, having been cut from their feeding and sapped of energy from the swim. Bear-cub numbers have fallen in U.S. bear populations, and many are undernourished at birth because their mothers have not been able to accumulate enough fat during the critical feeding season.

In addition to malnourished cubs, the problem of reproduction is a dimension that has oil and gas interests worried.

Bears den in land-based snow caves, and during birthing they are hypersensitive to disturbance. One scientist reported that his solitary and purposely limited presence in cave areas was enough to cause bears to leave dens and abort fetuses.

That’s why disturbances from all the activities associated with oil and gas drilling will be under renewed focus with the “threatened” listing for the bears. And that is perhaps why the conservative and pro-business Pacific Legal Foundation of Sacramento has indicated it may sue the Interior Department over the listing.

Oil and gas drilling to continue
Kempthorne was careful not to link oil and gas drilling to effects on the bear, and he said those operations could continue. It was clearly a move to appease an industry that has been broadly influential with the president, Vice President Dick Cheney and others throughout the administration. Still, the oil and gas industry is on edge, as evidenced by the harsh criticism over the listing decision by Republican Rep. Don Young of Alaska. He said Interior’s decision “is an assault on sound science and common sense.”

Undoubtedly, the industry and Young realize there is little room to argue that pipelines, roads, seismic blasting, ice-breaking ships and other activities associated with drilling (including the ever-present danger of oil spills in the superfragile arctic environment) don’t affect polar-bear reproduction.

It normally takes at least a year to prepare a recovery plan, which means that action policies to protect the bear will be an issue for whoever succeeds Bush after he leaves office next January.

Those still standing in the race to succeed Bush — McCain of Arizona and Democratic Sens. Hillary Rodham Clinton of New York and Barack Obama of Illinois — have all roundly criticized Bush and have vowed to redirect the nation’s policy course on global warming.