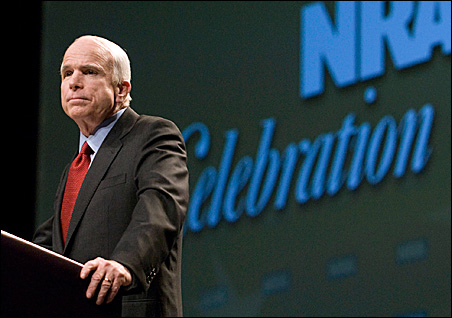 With due respect to Democrats who are poised to vote Tuesday in primary elections in Oregon and Kentucky, here’s the true benefit of that exercise at this weary state of the nomination race: It moves the contest closer to some semblance of a finish.

Still, Obama stirred excitement over the weekend by announcing plans to spend Tuesday night at a rally in Iowa, the Associated Press reported.

The intended symmetry is clear. Back in January, Iowa thrust Obama into an early lead and showed he could win in states that are nearly all white. Now Iowa apparently will provide the stage where Obama will claim a symbolic victory, although he would need to bring forth more superdelegates to truly clinch the nomination tomorrow night.

With or without over-the-top numbers for Obama on Tuesday, the Illinois senator has generated such a sense of inevitability about his candidacy that almost everyone is looking beyond the remaining primaries.

Looking to rebrand
Republicans look ahead with increasing trepidation after unexpected defeats in congressional elections in Illinois, Louisiana and Mississippi.  Some GOP leaders are saying, with candor unusual in politics, that the party is facing an outright catastrophe this November, the Los Angeles Times reported.

Top Republicans are calling on their party to reinvent itself or risk driving away more voters and donors, the Times said.

The Republican image is so stale, said Rep. Thomas M. Davis III, R-Va., in a memo to colleagues last week, that “if we were a dog food, they would take us off the shelf” because nobody is buying it.

“McCain’s approach — tough on taxes, but receptive to immigrants and committed to easing global warming — could help paint the GOP in new colors, more attractive to independent voters, Latinos and women,” the Times said. “Some GOP leaders now say that by embracing McCain and his policy platform, Republicans would instantly “rebrand” and reinvigorate their party.”

Deep divisions in GOP
But the move to rebrand Republicanism is laying open the party’s deep divisions on hot-button issues.

For starters, it sets McCain at odds with the many party activists who have raised their fists over immigration and border security.

Further, it angers global warming skeptics. Last week, conservative commentator Rush Limbaugh castigated McCain for his “embrace of a radical environmental agenda,” calling it a sign that the Republican Party “is abandoning conservatism, abandoning those things and those people that made it victorious.”

Finally, many in the party could celebrate the notion of polishing up the classic brand of conservatism — smaller government, less spending. But they aren’t necessarily ready to agree with McCain’s call to achieve the goal by fighting pork-barrel spending and ending the “earmarks” that allow Congress members to slip spending items into legislation.

“As the White House and McCain disparaged the $300-billion farm bill under consideration last week as one example of overspending and earmarking projects, Minnesota Sen. Norm Coleman and other key farm state Republicans up for reelection this year voted for it,” the Times said.

Looking to the Terminator
In his own symbolic agenda this week, McCain is heading for California where his rebranding campaign could get reinforcement from Gov. Arnold Schwarzenegger. The governor warned years ago that the GOP was in danger of “dying at the box office.”

McCain will get advice from some of the same GOP insiders who helped Schwarzenegger win re-election, the San Francisco Chronicle reported.

“The Republican brand may be in a bad position because of the Bush presidency, but people recognize that John McCain is not George Bush. … John McCain has a long track record of being a nontraditional Republican — and so does Schwarzenegger,” former Schwarzenegger communications director Adam Mendelsohn told the Chronicle.

Painting McCain as Bush
Obama already is jabbing a counterthrust to McCain’s rebranding strategy — especially when it comes to distancing the brand from Bush.

Speaking at a senior citizens’ center in Oregon, Obama declared McCain “has already said that he supports private accounts for Social Security — in his words, ‘along the lines that President Bush proposed.’,” the Washington Post reported.

“Let me be clear: privatizing Social Security was a bad idea when George W. Bush proposed it. It’s a bad idea today. It would cost a trillion dollars to implement at the front end, and would put the retirement plans of millions of Americans at risk on a volatile Wall Street,” Obama said.

In response, a McCain spokesman told the Post, “With his lack of experience, it should be no surprise that Barack Obama’s response to the problems facing Social Security is to raise Social Security taxes, while making misinformed partisan attacks.”

Looking for reconciliation
Meanwhile, Democrats are negotiating a merger of their fund-raising operations for the battle against McCain.

Top fundraisers for Clinton and Obama have begun private talks aimed at merging the two candidates’ teams, not waiting for the Democratic nominating process to end, the Post reported.

“In small gatherings around Washington and in planning sessions for party unity events in New York and Boston in coming weeks, fundraisers and surrogates from both camps are discussing how they can put aside the vitriol of the past 18 months and move forward to ensure that the eventual nominee has the resources to defeat (McCain) in November,” the Post said.

So the hope for the primary weary is that the finish is in sight one way or another. Puerto Rico votes on Sunday. If it goes that far, the wrap up comes June 3 in Montana and South Dakota.

Both parties looking to the next phase of campaign