At next month’s DFL convention in Rochester, the main order of business will be the endorsement of a Senate candidate to challenge Sen. Norm Coleman in November. While Al Franken and Jack Nelson-Pallmeyer, the two contenders, differ on some key issues — including the timing of a U.S. troop withdrawal from Iraq — both candidates espouse a progressive outlook in common with most DFL activists.

Thirty years ago, a common outlook within the DFL was clearly lacking as the party became embroiled in a bitter and divisive battle to nominate a U.S. Senate candidate.

The stage was set for the 1978 Senate nomination battle when Hubert Humphrey died in office early that year, on January 13.

Gov. Rudy Perpich appointed Humphrey’s widow, Muriel, to fill her husband’s unexpired term on an interim basis, but she would hold the Senate seat only through the remainder of 1978.

Because Muriel Humphrey limited herself to a caretaker role, the DFL Party was faced with the task of nominating a candidate who could run for the full six-year Senate term in November.

Fraser enters with strong city support
Fifth District Rep. Don Fraser was the first aspiring senatorial candidate to make a bid for the Humphrey seat. Fraser, a leader of the DFL’s liberal wing, entered the Senate race with a strong base of support in the Twin Cities.

Soon Fraser would face formidable competition for the open seat from Bob Short, a wealthy Minneapolis businessman, who had often butted heads with the DFL establishment. 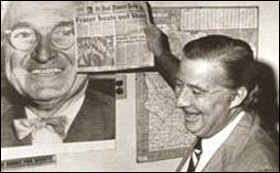 Bob Short holds up a newspaper with the headline “Fraser beats Short.”

In 1956, the hard-charging Short had managed Estes Kefauver’s successful presidential primary campaign in Minnesota when most DFL leaders were supporting Adlai Stevenson for the nomination.

Ten years later, Short stood by the DFL’s incumbent governor, Karl Rolvaag, when the Party dumped Rolvaag and endorsed his lieutenant governor, Sandy Keith, to replace him. Rolvaag, with Short as his running mate, challenged and defeated Keith in the September primary, but lost to Republican Harold LeVander in the November general election.

Short bypasses endorsement process
Given his record as a political maverick aligned with the more conservative elements in the DFL, Short knew he could not wrest the DFL endorsement away from Don Fraser, so he decided to bypass the endorsement process entirely and challenge Fraser in the September primary.

The new Senate contender also knew that his rival’s unabashed liberalism left Fraser vulnerable, particularly in outstate Minnesota, where the Minneapolis congressman was not well known.

Early on, Short established alliances with two powerful interest groups that were determined to block Fraser’s path to the Senate: the National Rifle Association and the anti-abortion Minnesota Citizens Concerned for Life. The MCCL’s support for Short’s candidacy was particularly important at a time when anti-abortion activists had not yet abandoned the DFL, as they would do during the following decade.

Short’s staunch opposition to gun registration and abortion helped exacerbate the cultural difference between the DFL’s more conservative, working-class elements and the party’s upscale liberal activists who were pro-choice and pro-gun control.

A third issue was decisive
While gun control and abortion would emerge as key issues separating Short and Fraser, it was a third issue that would have a decisive impact on the nomination battle. As an urban congressman with a strong base of support from environmentalists, Fraser had championed the cause of wilderness protection for Northern Minnesota’s Boundary Waters Canoe Area (BWCA).

Environmental activists had applauded Fraser’s efforts to restrict the use of motorboats and snowmobiles in the BWCA, but those restrictions were bitterly opposed by many northern Minnesotans who lived near the wilderness area in the heavily DFL 8th Congressional District. The BWCA touched a raw nerve in the 8th District, where normally loyal DFLers believed they were entitled to operate their motorboats and their snowmobiles in the Boundary Waters without the restrictions foisted on them by the wilderness advocates. For them, the BWCA was more than an environmental issue; it represented what they viewed as the arrogance and elitism of the Twin Cities.

Fraser had long considered himself a champion of the economic causes important to mine workers and other union members on the Iron Range, which abutted the BWCA. But now, Short, who opposed BWCA wilderness protection, positioned himself as the true representative of Northern Minnesota interests, while he portrayed Fraser as an outsider. Using campaign rhetoric that would be echoed 30 years later during the 2008 presidential nominating battle, Short accused Fraser of being a liberal elitist out of touch with the values and concerns of working-class Democrats.

Fraser received the party’s Senate endorsement at the DFL convention in June and led Short in the midsummer polls by large margins. But Short continued to pound away at Fraser’s support for gun control, abortion and BWCA restrictions. As the nomination battle entered its final weeks, Short’s well financed attacks began to have an effect; Fraser’s unfavorable ratings began to rise.

Northern Minnesota made the difference
Still, most political observers believed that Fraser’s strong base of support among Twin Cities liberals would win him the nomination at the Sept. 12 primary. On election night, early returns from the metropolitan area showed Fraser well ahead of his challenger. By 3 a.m., with 83 percent of the vote counted, Fraser led Short by 50 percent to 45 percent, and the St. Paul Pioneer Press declared Fraser the winner. But the paper had gone to press before the late returns from Northern Minnesota started to arrive. As they came in, Fraser’s lead began to erode. By 6:45 a.m., Short had pulled even with Fraser. When all the votes were counted later that morning, Short had eked out a slight lead, due to a massive outpouring of support from the 8th District.

Short would go on to lose the November general election to Republican David Durenberger in what came to be known as the “massacre” of 1978. That year, Republicans would win the governor’s office when Al Quie defeated Rudy Perpich. They would also gain another key statewide office when Rudy Boschwitz ousted Minnesota’s second U.S. senator, former Gov. Wendell Anderson. The defeated Anderson had arranged to have himself appointed to the seat held by Walter Mondale when Mondale became Jimmy Carter’s vice president in 1976.

Fraser would rebound and get elected mayor of Minneapolis in 1979, but Short had succeeded in driving a wedge into the DFL base just as a conservative wave started to roll through the country. In 1980, that wave would carry Ronald Reagan to the White House. Soon the term “Reagan Democrat” would join the political lexicon.

Iric Nathanson was an aide to Rep. Don Fraser in 1978.