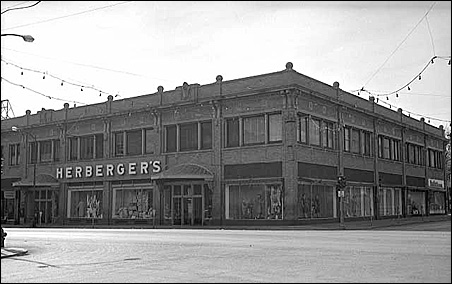 Courtesy of the Minnesota Historical Society/Photo by Al Heitman
The Herberger’s store in Hibbing, Minn., circa 1954.

Is Herberger’s the new Dayton’s?

Since the devolution of the Dayton’s department store started in 2001 with a succession of name and ownership changes, Herberger’s from St. Cloud, Minn., appears to be drawing disaffected shoppers through its doors in the Twin Cities.

The department store business is no picnic — any retailer or analyst will tell you that. But Herberger’s is quietly licking its chops as shoppers show up for sales such as the recent Rose Days (remember Dayton’s Daisy Sale?) and as it prepares to open its fifth Twin Cities store in Blaine, even in a down economy.

All while Macy’s prepares to fold its Minneapolis-based North division into Macy’s East, yet claims it’s going to tailor each of its divisions to local customers’ tastes. “My Macy’s” is the latest strategy for the stores formerly known as Dayton’s and Marshall Field’s.

One sentence from Macy’s Inc.’s Form 10K (PDF) filed with the Securities and Exchange Commission sums up what happens when a global brand is thrust upon 800-something department stores across the country: “Sales for 2006 in the newly re-branded Macy’s stores were lower than anticipated.” Even after gobbling up the May chain (which included Marshall Field’s), Macy’s net sales declined 2.4 percent in 2007 from the previous year.

Herberger’s, founded in 1927 in St. Cloud and owned since 2006 by York, Pa.-based Bon-Ton Stores Inc., isn’t changing its name, unsexy as it is. Long in the shadow of formerly formidable Dayton’s, midsize Herberger’s seems to be edging into Dayton’s place as a customer-centric department store whose buyers and managers understand Minnesotans’ tastes, expectations and philanthropic sensibilities.

Notch below Dayton’s
All that is paying off for Herberger’s, even though it has no pianists playing on weekends, no personal shoppers on call and no puffy popovers for lunch. The Minneapolis-St. Paul area has become Herberger’s fastest-growing market among 45 stores, and its Twin Cities sales in the past five years have “outperformed Bon-Ton’s sales trend,” says Steve Byers, Bon-Ton’s Milwaukee-based vice chairman of stores, distribution, real estate and construction. (Bon-Ton, whose nameplates include Carson Pirie Scott and the Boston Stores, won’t break out sales by division or percentage gains or losses.)

“Dayton’s was a tremendous competitor,” Byers admits. “It had gorgeous stores and a great level of service and quality. They were the upper end of the market. We were a notch below them in the marketplace. But when the name changed, what we heard from customers was that the store wasn’t quite the same – whether it was in fact or not.” 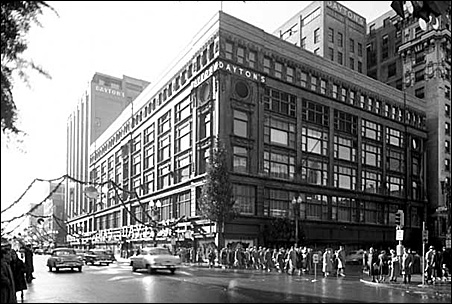 Courtesy of the Minnesota Historical Society/Photo by Norton & Peel
The Dayton’s at the corner of Nicollet Avenue and Seventh Street in Minneapolis, decorated for Christmas 1954.

No great surprise, but it has taken the news media (including this writer and shopper) awhile to notice that Lancome and Clinique have counters at Herberger’s, and that Liz Claiborne, Jones New York, Columbia and Bandolino are but a few of the labels on its racks. Even Herberger’s private brand styles (Ruff Hewn, Studio Works) look strikingly similar to Dayton’s Boundary Waters or even Field’s Field Gear.

“When you called and said is Herberger’s the new Dayton’s, I smiled because we started hearing that from customers three to four years ago, when Dayton’s name changed again to Macy’s,” Byers tells MinnPost. “We believe there’s an opportunity for us to capture market share from them, and others, to give our customer what she wants (moderate to better fashion, ambiance and attentive, friendly service).”

Somewhere along the line, Herberger’s now has more stores in Minnesota than Macy’s/Field’s/Dayton’s: 16 vs. 14.

Byers, who once worked for Midwestern stalwart Kohl’s, confesses to some reluctance in discussing Herberger’s local success. “At first, I thought, do I even want to talk about this; would it tell our competition too much,” he says. “We’re not a company that goes around boasting. We’re a smaller player in a retail market with Macy’s, Kohl’s, Target, so when you’re a smaller player you don’t necessarily go around boasting. You do it quietly.”

Which means Herberger’s moved stealthily into the former Montgomery Ward’s store in St. Paul’s Midway neighborhood. It took over the Mervyns site at Rosedale Center in Roseville, where Macy’s also has a store. It’s taking over a former Mervyns site at Northtown in Blaine.

Mollie Young, a founding partner of Nametag International, a Minneapolis-based global brand and naming company, says it might be impossible to fill what she calls the “big, gaping hole” left by Dayton’s since its name and local ownership disappeared. That “enormous void,” she says, is a “rich heritage of product commitment, a customer service commitment and a community service commitment.”

Still, “there’s an opportunity to capture part of it, so Herberger’s, I think, is doing more than any other department store brand currently,” says Young.

In the wings is the Davenport, Iowa-based Von Maur department store chain, which has one store in Eden Prairie and has been scouting for more locations in the Twin Cities, according to a recent report in the Pioneer Press.

Meanwhile, Macy’s will be fighting back with its “My Macy’s” approach not only here but also in about 200 stores across the country, says Jim Sluzewski, spokesman for Cincinnati-based Macy’s Inc. Among the areas will be Chicago, where former Marshall Field’s shoppers are actively trying to bring the Field’s nameplate back when they’re not gleefully pointing out that Macy’s private brands are showing up at discount stores. A frequent refrain: Bring back Field Gear.

Sluzewski is quick to defend the nameplate changes in Chicago as well as here. “Do keep in mind that Marshall Field’s had been among the worst performers in the industry,” he says. “There’s a lot of sentiment attached to the name, and we respect that and understand, but people weren’t shopping there to the same extent they were in the past. So what’s the alternative? Keeping the name and watching it continue to decline? Or trying something new and different to capture the imagination?” 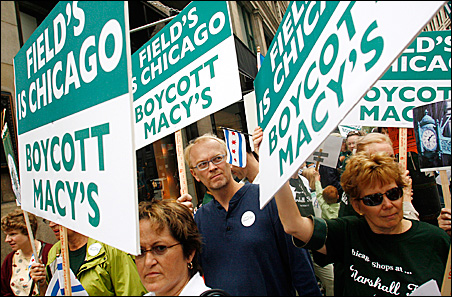 REUTERS/Joshua Lott
In 2006, Chicagoans protested in front of the former Marshall Field’s department store on State Street when Federated Department Stores Inc. turned it into a Macy’s.

As for those of us who pine for the pure, unadulterated Dayton’s? “Again,” he tells MinnPost, “Dayton’s is a terrific name with a real legacy in that local market, but the economies of the retailing business unfortunately don’t favor purely local retailers, and we wouldn’t be able to get the merchandise we needed if we only had a local nameplate.”

Then again, Macy’s cookie-cutter, one-size-fits-all strategy hasn’t been taking off in fly-over land. Which brings us back to the My Macy’s campaign announced in February.

“The intention here,” says Sluzewski, “is we want a customer to walk into the store in downtown Minneapolis, on the Nicollet Mall, and say, ‘This store seems to have exactly what I need; this is my Macy’s — you get me.’ And it’s to have a customer walk into the store at Southdale and say, ‘This is my store — you get me.’ The same is true for what we want in every store across the country. It’s tailoring to the needs of the customers, which is really important, because the customer has so many choices.”

Starting in May, two Macy’s districts will be organized in Minneapolis – one for stores in Minneapolis and points west including the Dakotas, the other for stores in east metro and Wisconsin. Each district will focus on 10 stores, each with a vice president and what Macy’s calls “district merchants and planners” who are on the ground – even “riding the escalators with customers,” Sluzewski says — listening to them as well as sales staff about what they want and what’s selling or not.

But don’t expect to see any big changes until next spring, which is how long it will take to buy and serve up merchandise tailored to local tastes, Sluzewski says.

Understanding the market
So, can Macy’s get Minnesota? “It’s getting pretty late,” says Young, the branding strategist. “It’s almost to the point of blow it up and start over,” she adds, chuckling. “It’s just critical to understand the market and the uniqueness of the market. … The best marketers build products around the interests and needs of customers.”

Interestingly, at least one nameplate in the Bon-Ton chain learned that lesson the hard way, Byers says. Before Herberger’s took over the former Mervyns site at Rosedale Center, Chicago-based Carson Pirie Scott closed a store there.

“Their buyers were in Chicago and had a Chicago bias,” said Byers who joined Bon-Ton four years ago. “Certain things work in Minneapolis and certain things work in Chicago. I don’t know if there was the same openness we have today within the organization in terms of letting the customer — and the sales staff — tell us what they want.”

Understanding Minnesotans also means embracing a penchant for philanthropy and knowing how to promote it, Young says. And that’s another reason Herberger’s seems to be succeeding, she says.

The Herberger family is known for its charitable efforts across the nation, including endowing the business school at St. Cloud State University and university programs in Arizona, where the family moved in the 1940s. “They have a nice philanthropic commitment, but it’s not the folklore that Dayton’s created,” Young says.

Herberger’s most visible efforts show up in store promotions called Goodwill Days and Community Days. For each item of clothing donated during Goodwill Days, a customer receives a 20-percent-off coupon. Goodwill ends up with about 7.5 million pounds of clothing a year; customers end up with new clothes and whatnot. During Community Days, local nonprofits receive $5 for every Herberger’s coupon book they sell, part of $20 million returned annually to communities Bon-Ton serves, Byers said.

Byers is happy to tick off other reasons for Herberger’s appeal, but he suspects newer customers are a bit homesick.

“We’re kind of like home for people,” he says. “Dayton’s was always home for people. They grew up with that. While Herberger’s is not new to Minnesota, it is [relatively] new to Minneapolis-St. Paul. And now, hey, there’s this little secret called Herberger’s, and it came to the big city, and it’s a pretty nice place to shop.”

Casey Selix, a former business writer and editor for the Pioneer Press, is a news editor for MinnPost. She can be reached at cselix [at] minnpost [dot] com.

Tell us what you think

Is Herberger’s the new Dayton’s? Can any retailer replace Dayton’s? Do diehard Dayton’s people just need to get over themselves? Are we giving Macy’s a fair shake?