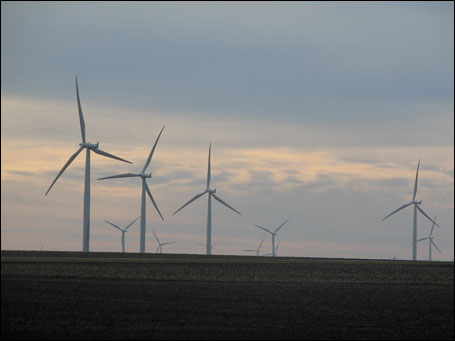 Some southern Minnesota school districts that lie in the state’s fertile wind corridor were caught off-guard last year, when the Legislature passed a technical amendment — without a public hearing — that sent substantial revenues from the giant wind turbines blowin’ in the wind away from educators.

And they’re now hoping to rope it back in.

An earlier law, intended to entice wind turbine companies to build in Minnesota, had promised some proceeds from a wind-generation tax to the local school districts. Grand Meadow, for one, figured they’d be seeing a windfall of $50,000 in 2009, enough for a second high-school science teacher.

But last year’s change, in the form of a small paragraph halfway through the voluminous Omnibus Education Bill, derailed that plan.

School officials in the 22 affected districts — including Joe Brown of Grand Meadow — immediately sought redress, thinking that legislators couldn’t have knowingly punished his district, which has 32 teachers and  has had to deal with a recently defeated school levy.

One of the legislators Brown recruited, in fact, is his wife, Rep. Robin Brown, DFL-Austin. She doesn’t represent Grand Meadow but has other affected school districts in her district.

Joe Brown notes that many of the farmers who agreed to lease their land for the giant turbines did so with the understanding that it would help support their local schools. And, Brown says that since the law change, the wind companies report that it’s harder to recruit farmland for their turbines. As a result they have been focusing more on Iowa farmland.

Wording has been introduced at the Capitol this session to funnel the money back to the schools, but it was deleted from an education bill. Because it’s too late to get a new bill in the works this session, some legislators are hoping to add an amendment into other pending legislation.

“I’m looking for a chance to add it back as an amendment to another bill,” Robin Brown said. “Most of those legislators who heard testimony in committee say they support it, but I’ve got to get others to support it, too.  This wouldn’t be so important if the funding of schools was equitable around the state, but as it is, we have to try to secure every bit of money we can.”

In testimony at the Capitol last month, Joe Brown offered background, including these points:

• 24 wind turbines are located in the Southland school district

• 37 wind turbines are located in the Grand Meadow school district

Each of these wind turbines is valued at $2 million. Even though they have taken farm land out of production through the installation of service roads and wind turbines they do not generate any property taxes for our school district. This is the key distinction between the way wind turbines and power lines are treated.